So a German and an American walk into a GrillHaus ...

When cultures collide—say spicy, vibrant Mexican cuisine with charred cowboy Texas barbecue or Japanese fare with California’s obsession with kale and chipotle aioli—things get interesting. Flavors stop being polite and start getting real.

A French take on pho? Let’s do it. Chicken tikka masala pot pie topped with Indian spices? Bring it on. To quote Mr. Cole Porter, “Anything goes,” and why shouldn’t we revel in that spirit of discovery? I say don’t knock it till you’ve digested it—and yes, I realize my culinary philosophy is dangerously similar to that of my two opportunistic dogs. 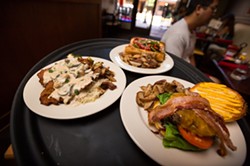 Excuse me for not being snobbier.

SLO’s new German-inspired haunt, Wineman GrillHaus, will undoubtedly receive flak for not being “authentically German,” but, in truth, it never aimed to be.

Yes, the waitresses wear colorful dirndl costumes (this will delight some and miff others); yes, much of the beer is imported from the Fatherland; and yes, you can dunk juicy brats and soft pretzel chunks into an impressive lineup of mustards—many house-made and all finger-licking good.

Even so, this SLO take on a German beer hall has maintained its American spirit, right down to the curry ketchup and fries.

Enter: The sauerkraut stuffed pastrami Ruben egg roll (a novel idea, oh-so-perfect for dipping into Thousand Island dressing), the six different burgers on the menu (toppings include everything from cucumber, pastrami, and sauerkraut to ranch dressing and house-made roasted garlic dill mustard), and the playful selection of bratwurst variations, which range from “Tex Mex” style with pico de gallo and black beans to pineapple-bacon.

This a melting-pot situation, to be sure.

Owner Jason Luke, who wears lederhosen most days, is unapologetic about his German-American fusion. Trips to L.A. and the Bay Area inspired the concept.

“Much American food has its roots in Germany and with German immigrants. I wanted to create a German-style beer hall with both mainstream items as well as some plates that some people aren’t so used to,” Luke said. “I think people have preconceived notions about what we should be all about. We are who we are, and we hope those who like us come back.”

Whatever you do decide to order, Luke doesn’t want you to think too hard about it. Just sit down, swig your stein of Budweiser or Bavarian brew, and chow down.

That’s exactly what I and New Times photographer Kaori Funahashi did one afternoon (minus the day drinking), and the experience was both filling and meaty. 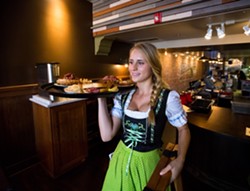 Will those still reeling from the absence of Old Vienna in Pismo Beach find a replacement for their heartache? No. But they could make a plucky, new friend in GrillHaus. The entire place has been revamped, and outdoor seating offers up the many sights, scenes, and smells of Higuera Street.

According to Luke, a few ladies from a local German club recently came in and raved about the grub. This was all he needed to hear.

“If they like it, who’s to say it’s not German enough?” he said.

When I think of Champagne, I think of Lindsay, No. 1 bubbly lover in the greater Los Angeles area. We’ve been close friends since we bonded over our mutual love of Motorhead during the first day of history class. This was at Redondo Union High School, and it’s no wonder we found each other. I was wearing a Motorhead back patch, and she was wearing a similar patch of some punk band safety-pinned over her mini skirt. If only we could have stayed that cool.

Over the years, we’ve talked at length about getting that matching Ace of Spades tattoo, but, like most ill-advised teenage schemes, it never came to pass. Her “other good friend,” bubbly, did manage to make it inked onto her flesh a few years back, and I’ll admit that I was a little jealous.

The image: A bottle of Champagne. The words: “No troubles, just bubbles,” in cursive script. That sly one-liner has grown to become her all-purpose catch phrase, meaning, “Hang in there, baby.” While whiskey reflects my personality all too well (contemplative, a tad wild, and at times emotionally unpredictable), sparkling wine suits my old friend to a T. That’s why I love her. She is undeniably bubbly, with panache for networking and ability to chat up anyone, even at the airport.

This is what sparkling wine is, personified: A reliable companion who fits in with ease at the beach, a bar, or at a fancy gala event. A contagious effervescence that gives you instant permission to celebrate and imparts a shimmery patina to all it touches.

Considering the fact we all have vivacious friends like this in our lives, and most everyone enjoys the tickle of bubbles in a flute glass, it’s amazing that this year marks the first for BubblyFest by the Sea, the only festival dedicated to sparkling wine, French Champagne, and Spanish Cava on the Central Coast. Click over to CaliCoastWinery.com and check out SLO’s first-ever bubbly map. The number of producers is astounding.

Sitting at the bar at Lido at Dolphin Bay Resort in Pismo Beach, I soaked in event organizer Holly Holiday’s big plans for the fest, nearly sold out as of press time. While sipping a bit of bubbly herself, the Create Promotions CEO explained that the resort would be transformed into an opulent 1920s shindig dripping with Great Gatsby glamor on Friday, Oct. 24. Plush antique furniture? Check. Music by the Tipsy Gypsies? Check. Bubble wall (whatever that is)? Check.

“I had known there were a good portion of sparklings in the area but had no idea there were so many,” Holiday said of her first encounter with the aforementioned SLO bubbly map. “So many producers are coming out with their first vintage this year, and many are debuting those at the fest. In Santa Barbara County in 1994, there were about four sparkling wine producers. Now, they have about 29, with several more on deck.”

Producers from France, Oregon, and Napa, as well as a swath of local San Luis Obispo County purveyors (including Laetitia, Pomar Junction, and Cass Winery), will come together to spray the glistening fizz with abandon.

That lineup also includes Solminer Winery of Los Olivos, set to debut its 2013 Nebullite Sparkling Syrah, which confirms yes, sparkling wines do come in all colors, tastes, and varieties.

“Sparkling wine is an exciting movement that’s coming back,” Holiday said. “We want this to be a really fun event, like hanging at Gatsby’s house.”

The takeaway? Bubblyfest by the Sea will probably be as close as any of us will get to hanging out in one of those giant burlesque champagne glasses, so I suggest going for it. Must I say it? YOLO. And if you run into my girl Lindsay, tell her it’s all bubbles from here, baby.