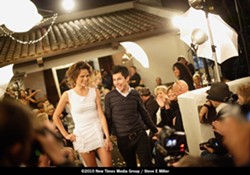 It’s Friday, May 14, the day of Central Coast Fashion Week’s second fashion show in a series of six. I’m chilling at home when I get a call from New Times’ receptionist Tanya Gallardo.

What do Brazilians call a bikini wax? I’ll tell you one thing, they don’t call it a Brazilian! Last week I thought I was being hilarious when I wrote this about Blade Runner Salon: “If I thought I could get away with a Brazilian, that’s where I’d go. They’re very gentle, I hear.” Unfortunately, a towering Amazonian Brazilian model from the fashion show thinks I was making some veiled sexual innuendo about her, so she storms into the New Times office screaming for my head on a platter! Holy guacamole!

Thankfully I am not at the office because even after our charming receptionist explains I was referring to a bikini wax, the Amazon will not relent. “I don’t believe you!” she screams in a charming Brazilian accent. What’s a guy to do?

I hang up with Tanya and quickly text Central Coast Fashion Week owner Johnny Kenny, “There’s some crazy Brazilian model who thinks I insulted her. WTF? Can you guarantee my safety tonight?”

He says he can, so here I am at 9:30 p.m. in front of Native as a line of fashionistas await entry into the hottest fashion extravaganza on the Central Coast. So much glitz and glamour! Even the VIP wristband I get is sparkly! Club music is thumping, so I head to the bar and immediately meet George Lukasheay, who’s wearing knee-high jackboots, dark pants, and a cropped marching band jacket with military-style brass buttons and red piping. I mistake him for one of the models, but George is actually a fourth-year architecture student at Cal Poly with two piercings in one ear and four in the other. Where did he find this ensemble?

“I kind of take shit and modify it,” he explains. “I grew up in the goth/industrial scene.”

“Your hair is awesome,” I venture.

“Normally I cut it myself about once a week,” he says.

“I barely shave once a week,” I add lamely, and then I see Johnny Kenny, who tells me how Central Coast Fashion Week, his company, is going to make our area “the Sundance Film Festival of fashion.”

“We’re going to be the premiere indie couture event, where we’ll merge 30 indie designers with 30 indie bands,” he says, gazing into the future where he sees a weeklong event peopled by the rich and famous. “We’ll be a catalyst to launch these up-and-coming designers and bands to the next level!”

“That’s pretty ambitious,” I say incredulously. “Isn’t SLO too small for that?”

“Sundance is a small town.”

“We have Avila Beach, wine country, one of the best downtowns in the country,” he says undeterred by my skepticism.

Johnny rushes off—he’s got a fashion show to run, after all—but he sends over his lovely intern Jillian Bove, a 21-year-old Cal poly business major whose senior project is based on this event. She’s wearing a fetching teal dress by French Connection and carrying a tawny-colored clutch by Michael Kors.

“What about your shoes?” I ask gamely.

Then I take my seat along the runway and meet Jillian’s mom Jody Bove, who came down to see her daughter shine.

“So, what you wearing?” I ask, waiting to hear a list of designers.

“Your daughter knows what she’s wearing!”

“Did she tell you I took her shopping for all that? She spent half an hour ‘trying on’ her clutch, posing in the mirror with it.”

A group of guys has gathered in the back as the models strut down the runway, so I head over to listen in.

“It’s like a drool fest … beyond,” quips Andrew Turner, who with his partner Boone Bauer owns Pure Salon & Skincare in Grover Beach.

“This is nothing,” says Boone. “I lived in Vegas for eight years, in the thick of it!”

After the show I see Shireen Zorba, who I totally caught giving the male models the Big Eye!

“Oh, I know them,” she says dismissively. “I was trying to get them to laugh, and it worked!”

Oh crap! There’s that Brazilian giant. I’m out of here!