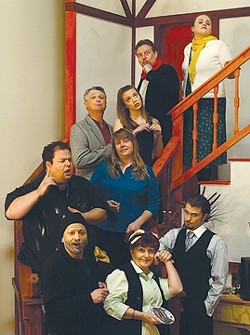 New Times Tell me why you wanted to bring Noises Off to the Central Coast.

Chrys Barnes, director Noises Off is my all-time favorite farce. It is probably the funniest backstage comedy ever written. It’s intricate, it has very clever dialogue, and plenty of physical comedy. I am a student of classic comedy—Marx Brothers, the Three Stooges, W.C. Fields, the old vaudevillians. And this has all kinds of classic bits that represent that type of comedy.

New Times Tell me about your experience.

Chrys Barnes This is the second show I’ve done. The first was Grandma Sylvia’s Funeral—which was a scripted improv. The whole idea behind Bent Angel Productions [with Co-producer Susan Desmond] is giving performance opportunities to a more diverse group of people. We plan to split our time between more professional productions like Noises Off and Readers Theater productions that are easy to produce, which will include first-time actors and seniors. Arts need to reach out to the public, and theater is a communal experience.

New Times Since the show is about the behind-the-scenes look at another show, are there any funny anecdotes from your production?

Chrys Barnes What I notice as a director: the trouble the actors in the script are having with props, the trouble with each other, the trouble with romances, or the doors don’t work, and people are late on their cues. It is the same problems I have producing this show. I keep telling the cast, what we’re going through is identical to what the characters are going through in the show. We live in the parallel universe and it’s funny. We have people asking, “Where are my sardines? My sardines are supposed to be on the prop table.”

New Times And that is funny because you never hear anything about the backstage antics of local productions.

New Times What is your acting history?

Larry Barnes, plays Lloyd Dallas I have always been an actor. I started out in school—I received my bachelors degree in theater at Cal State Fullerton and master of fine arts degree at UC Riverside. I have been in SLO Little Theatre productions, I played Atticus Finch in To Kill a Mockingbird, I’ve been in productions over at Unity, Life With Father —I played Father.

New Times Tell me about the character of Lloyd Dallas.

Larry Barnes He’s a hilarious character and a frustrated theater director … and plans to direct bigger and better things after this job—a production of Richard the III. The current production turns out to be nothing but trouble; there are backstage romances, creating many triangles and all kinds of animosity. One of the characters in the play has a serious drinking problem, which makes him a bit unreliable.

New Times Why should I go see Noises Off?

Larry Barnes If you’ve ever wondered what goes on behind the scenes of a production, especially a troubled production, it’s hilarious.

Larry Barnes Oh yes, the problems encountered by this theater company are encountered by all theater companies and probably most work places. During the second act, the entire stage rotates and you are truly seeing the behind the scenes of the play. It’s a wonderful set. Just to watch the set rotate, many audience members will sit just to watch that happen. It’s a spectacle, and suddenly you’re backstage with the actors. ∆

Christy Heron says noises on! Tell her to shut up at cheron@newtimesslo.com.