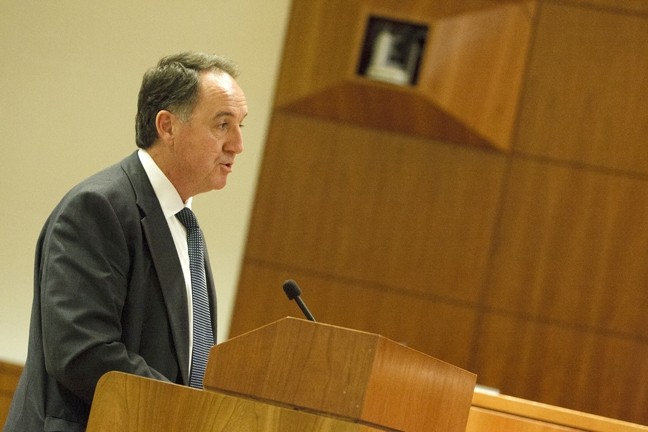 On June 7, local business people strode in a cavalcade, one by one, to tell San Luis Obispo County supervisors how wonderful the Economic Strategy is and how much they’ve learned through a collaborative effort. A parade comprised of the project leaders from the Economic Vitality Corporation (EVC) and various other business leaders praised the process and cooed along with supervisors over how the work has been viewed as a model of collaborative economic strategies.

But in the business-led effort, started by business leaders, for businesses, the public is the largest contributor by far.

So far, SLO County has directed $240,000 toward the effort to help grow the local economy. That’s nearly twice as much money as all other participants combined have put in.

Though the economic plan being crafted seems a bureaucratic dreamboat in the eyes of its crafters, the process and the materials it’s produced have left others skeptical.

“Essentially, this is bureaucratic gibberish without meaningful content,” the Coalition of Labor, Agriculture, and Business of San Luis Obispo County wrote in its latest newsletter to members. “Nothing seems to be happening.”

The group North County Watch sent a letter scolding the county and EVC for excluding public participation in the process.

“The county has contributed $240,000 to this project, and the public appears to have been kept in the dark as to the value received from this expenditure,” North County Watch President Sue Harvey wrote to county supervisors.

County officials are looking to give an additional $90,000 to the County Visitors and Conference Bureau and designate it for the Economic Strategy. The request has been placed on the agenda for the upcoming county budget hearings.

All this prompts the question: What have we bought?

Dubbed the Economic Strategy Project, the effort launched in May 2009. It was initially to be a public-private partnership headed by the nonprofit EVC, which formed in 1994 to mount a business-led effort toward growing the local economy.

The project began as an update of the economic element of the county’s General Plan, which was last updated in 1999. Over time, the project morphed into a partnership between the county and the EVC—along with its membership of various businesses throughout the county.

Two years into the process, the EVC, with some county support, has in hand the physical result of those early labors in the form of the Clusters of Opportunity Economic Strategy, Version 1.0. The 44-page report compiled by EVC and county-hired consultant Collaborative Economics outlines six “clusters” of business in the county. In no particular order, the clusters—as defined through the collaborative brainwork of more than 100 local business representatives—are business design and construction, health services, knowledge and innovation services, specialized manufacturing, wine and agriculture, and recreation and accommodation. According to the report, these clusters account for about a third of the jobs in the county, but have provided almost 90 percent of the economic growth.

Some industries, however, have been strategically left out. Local activist and regular public speaker Eric Greening asked project officials at the June 7 meeting why arts hadn’t been included in any of the clusters, and why representatives from the local arts community weren’t allowed to participate in the group’s meetings.

“This is a huge oversight,” he said.

EVC President and CEO Mike Manchak responded that while the arts community will reap the benefits from the project, only industries that have historically shown the most economic growth were included in the clusters.

Getting to this point took the combined brainpower of project sponsors—and their combined wallets, as well. The strategy lists a dozen sponsors who collectively pumped $180,500 into the project, including an initial $50,000 contribution the county made using its Community Development Block Grant funds.

The Morgan Family Foundation, a Los Altos-based nonprofit that funds collaborative business efforts in California, is the second-highest contributor with $50,000. Pacific Gas and Electric threw down $20,000, alongside $18,000 from Southern California Gas Company, $10,000 from Rabobank, and other contributions from companies like AT&T, SunPower, First Solar, and Sierra Vista Regional Medical Center.

Manchak called it a “true public-private partnership.” However, the assistant county administrator told supervisors that “this is a community plan, not a government plan,” and the county will only attempt to influence the plan in areas that would require county policy changes.

But by the numbers, the Economic Strategy is far more public than private. On May 17, county supervisors voted to direct $190,000 in federal stimulus dollars to the EVC in order to implement the strategy, as recommended by the county’s Workforce Investment Board, a legally mandated team headed by local business representatives that decides how to distribute federal money. The supervisors’ vote retroactively approved a contract to direct the funds to the EVC.

Along with the initial $50,000 investment, SLO County has provided 64 percent of the entire money pot. For a comparison, the Morgan Family Foundation, as the second-highest contributor, accounts for just 13 percent of the funding. As of press time, an accounting of how the county’s recent contribution has been spent was not immediately available.

Aside from this particular investment, the county also provides the EVC with about $80,000 to $100,000 per year through its Community Development Block Grants, making the county a Diamond Level sponsor alongside such groups as AT&T, PG&E, and Chevron.

Members of the cluster teams and even critics of the project have said it’s a worthy public investment—so long as the plan creates jobs.

To do this, the strategy outlines implementing goals for each group of “cluster champions,” things like assembling a team to focus on expediting green-energy projects, increasing the county’s Medicare reimbursement rate for health-care providers, and cataloguing and increasing broadband service in the county.

“It’s strategy and it’s connection to activities to help them to do that,” he said of the plan.

Asked how the money is being used to prevent layoffs, Schultz said he didn’t have any specifics in front of him, nor could he provide any hypothetical situations.

The strategy team will now provide regular reports on the status of the project, Schultz said, which will include details of how the money is being spent.

“It’s a very challenging time,” he said. “There are places in this nation and the state that are attracting and growing companies faster than we are.” ∆