So you want to be a sommelier?

A local wine expert ascends to the top ranks

Certified sommelier Ali Rush Carscaden doesn’t like the fact that her hard-won title is tossed about by people who haven’t earned the right to use it. It’s true: Many restaurateurs single out a dining room server as their sommelier just because he or she has a handle on wine basics or happens to know local wines. But earning certification as a sommelier requires an incredible amount of time spent studying the history of wines from around the world and tasting them to earn the prestigious title. Once a candidate passes the introductory course, there are three more tests, each one requiring far more skill than the previous exam. 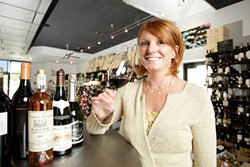 “Earning certification really signifies credibility,” Carscaden pointed out, “as we become more developed and sophisticated here on the Central Coast.”

Carscaden and her business partner, Allison Dominguez, own 15 Degrees C, a serious wine shop that opened last December next to Trader Joe’s in Templeton. Not only did she earn her coveted title last March, she helped five other local experts in SLO County earn certification as sommeliers through her previous job of selling wine. Among those who passed the intermediate exams were Chef Bill Hoppe of Hoppe’s Garden Bistro, Kevin Riley of the Park Restaurant (who’s now sommelier at Cyrus in Healdsburg), and Chris Battles of Morro Bay Wine Sellers.

“I don’t want to insult anyone in the industry,” Carscaden pointed out. “But we’ve got a lot to learn on the Central Coast about the wine industry in general.”

She said that she’s working at changing that status by offering sophisticated tastings (like she teaches at Cal Poly) at her wine shop for her peers and custsmers. Battles and his business partner, John Nordhus, are offering what they describe as “sommelier series seminars” to teach local wine lovers more about the wide world of wine. Check it out at www.morrobaywineseller.com.

“It’s good to challenge yourself and see where you stand,” Battles said of passing the advanced sommelier course. “I’m modest. I didn’t do it for stature; it gives me more credibility.”

Before opening 15 Degrees C (15 degrees Celsius, or 55 degrees F represents the perfect wine cellar temperature) Carscaden worked for the Henry Wine Group (HWG), a premium wine distributor that imports great wines from around the world. Carscaden, like everyone in the HWG sales force, attended monthly wine classes with Master Sommelier (MS) Peter Neptune, HWG’s vice president of education. The HWG philosophy is admirable: “By working closely with our partners on both ends of the industry (from producers to restaurants and retailers), we strive to maintain a seamless flow of service from the producer to the customer.”

Carscaden, HWG’s Central Coast sales representative, always spent extra time educating the employees at the restaurants and wine shops about the wines they were selling.

“I would bring maps and photos, and provide information during the tastings,” she said, explaining that she learned those strategies from Neptune. “Peter taught me that if you start educating people and get certified sommeliers in the area, it increases sales, and Henry has a vast amount of imports. The more educated they become, the more experimental they are.”

HWG sponsored Neptune’s class and provided the wines for their first introductory sommelier course held at Lido in Dolphin Bay Resort for their Central Coast clients. That class was well attended by winemakers, waiters, and retailers. Carscaden invited me to attend so I could see Neptune in action, and I was impressed. This wasn’t just about selling locals more wine, although HWG does it well—it was about him sharing his vast knowledge of the world of wine, and wine and food pairing. His passion and enthusiasm never dimmed throughout the daylong, intensely detailed class. Although I attended the entire class, when they didn’t offer me the test, I was surprised. I was eager to join in, but Carscaden said that they didn’t realize I might want to take it, too. Besides, it was generously provided for the customers of HWG, but participants still paid $200 per person to take the exam.

During the certified sommelier exam (also $200) candidates had to successfully pass three portions that included a blind tasting, a multiple-choice exam, and a written exam. During the blind tasting, the wines were hidden from view and participants had to taste and match Neptune’s comments for each wine for appearance, nose, palate, length, and conclusion of its quality and readiness for drinking. To become a master sommelier during the blind tasting, you must be able to taste six wines and know the exact vintage year, the varietal, the country, and the appellation where the grapes were grown.

There are only two ways to achieve certification as a sommelier: the Wine and Spirit Education Trust (WSET) and the Court of Master Sommeliers (CMS). At HWG in Newport Beach, Neptune is recommended as an intermediate and advanced instructor by WSET. He’s also a member of the CMS, the highest distinction a professional can attain. There are only 158 master sommeliers in the world. In North America alone, there are 87, of which only 14 are women. Of the candidates who take CMS’s advanced exam for certified sommelier, which costs $895, on average only 25 percent pass. The master sommelier exam costs $800, but can only be taken by invitation from CMS, and only 10 percent pass it.

Most everyone in the trade now refers to these wine experts as “the somm,” an easily pronounced moniker for sommelier, which sounds different depending upon who you’re talking to: Some say suh-mal-yay (Wikipedia), like Carscaden, whose mentor was Neptune, while others pronounce it som-ell-yay (Webster’s Encyclopedic Unabridged Dictionary), as I learned to say it when I was tasting coordinator for Wine Spectator magazine.

One brave soul willingly admitted that he didn’t pass the certified sommelier exam: John Nordhus, who sailed through two tests until it came to theory.

“I had Romania down on the practice test but I didn’t pass theory because they asked us for the complete run-down on Sherry production, and I wasn’t prepared,” he said, chuckling good-naturedly. “But Peter told me I would be able to take just that part of the test again to earn certification. I got the same education as those who passed, but it would have been nice to pass.”

“I’ve been studying for this four years and it’s a huge accomplishment,” concluded Carscaden, who’s already studying for the final step of her journey toward becoming an MS. “When people come to my shop and ask me to recommend wines, they know they can count on what I tell them.”

This small but well-stocked wine shop offers a great selection of local wines and imports from around the world, served by the taste, glass, carafe, or bottle. They also serve a small lunch menu of wine-friendly plates, an assortment of imported and domestic cheeses, and beers. Join their mailing list on their website at www.15DegreesCwines.com to stay informed about special events, classes, and winemakers’ dinners.