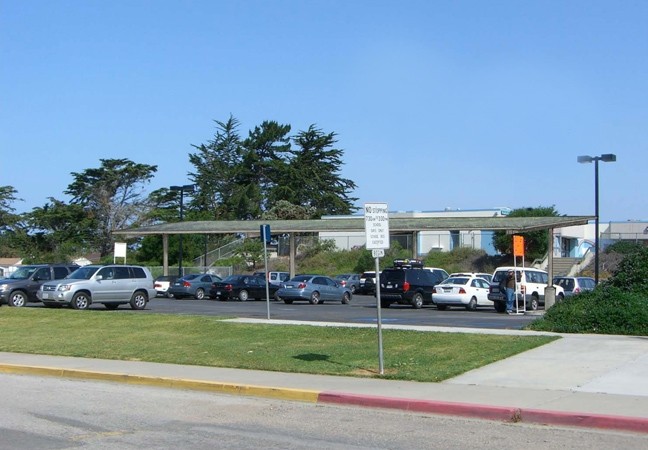 Though San Luis Coastal Unified School District is being applauded for its efforts to install solar panels on nine campuses, some critics consider the plan less than sunny.

The project was first criticized because many trees would be removed to make room for 10-foot carports on which the solar arrays would be built. But several opponents at the April 22 meeting of the Los Osos Community Advisory Council argued the structures would be unsafe and would be eyesores.

Inspired by Assembly Bill 32, the Global Warming Solutions Act of 2006, which provides incentives for early steps in curbing greenhouse emissions, nonprofit organizations and school campuses across the country have arranged similar solar projects in conjunction with utility companies.

“This is a power purchase agreement,” Miller said. “REC is financing the design and installation of panels and the effect will be cost-neutral to the District.” In exchange, he said, the district will agree to buy all of the energy produced. REC and the Southern California energy utility Sun Edison, the eventual owner of the panels, will get tax write-offs, defraying much of the cost.

The project came under fire because nearly 200 trees were scheduled for removal to make way for the carports, but that number has been reduced to 154, which would be somewhat offset by 130 trees scheduled to be replanted elsewhere on the properties.

But as one Los Osos resident said at the April 22 meeting of the Los Osos Community Advisory Council (LOCAC), “this is no longer simply about the trees.” Other contentions, such as the aesthetic impact on surrounding neighborhoods, safety and liability issues with the carports, and biological issues, have been raised.

“These structures are hideous,” said Los Osos resident and former LOCAC member Julie Tacker. “This is a highly scenic community and our land use policies say we don’t want these things to be visual in nature.”

“I’m very supportive of those that want cleaner energy sources, but I can’t believe that we can’t do better,” said Morro Bay City Councilwoman Betty Winholtz. “The trees they want to cut down are next to our designated scenic highway. Plus, as far as setting an example, I think it sends a bad message to sacrifice one environmental benefit for another.”

Critics might not find the carports very pretty, but they contend they would create an “attractive nuisance”—that the panels would be highly visible would make them a target for vandalism and theft.

“These are vulnerable structures on school property,” Tacker said. “The district’s answer is, well, they’ll be insured, but who pays for it? Us!”

It’s uncertain whether removing vegetation in the parking lots could have biological impacts. Tacker pointed out that the Morro Shouldband Snail is native to locations in Los Osos and is designated a threatened species by the U.S. Fish and Wildlife Service.

One thing is certain: The critics don’t understand why the arrays couldn’t be installed on existing rooftops.“This would lessen the impacts environmentally and we wouldn’t have to look at these things,” Tacker said. “I’m hearing that the district would need to retrofit the buildings, but they haven’t done the analysis, so we don’t know what the cost would be.”

“The margin for profit is very tight,” Parker explained. “One thing the district wanted from the start of this was to be revenue-neutral in year one. We don’t want to spend any more than if we continued to buy power from PG&E.” Parker said existing rooftops were determined not able to support the panels. “It seems to me to make sense that if these things are going to be around for 25 years at least, that we should know specifically how the project would be impacted if we put them on the roof,” Tacker said.

“These are old roofs and were not designed to support these structures,” Parker said.

One option being tossed around is using thinner, cadmium-based panels, which are lighter in weight, which the roofs could potentially support. Other similar projects, such as a joint project by Solar Power & Electric and Southern California Roofing for the San Diego Unified School District in 2003, used these thinner arrays.

Parker, however, said these panels are less productive and that cadmium, a type of metal used in these panels, is a known carcinogen. “Cadminium is considered a toxic material and our school board isn’t keen on putting toxic materials in the proximity of its students,” he said.

In February, the Santa Lucia chapter of the Sierra Club met with the REC Solar team to encourage the use of thin-film panels, so as to avoid the removal of any trees, as well as the need for retrofitting.

“We’re being told it can’t be done,” said Chapter Director Andrew Christie. “But how is it [these panels are] good enough in San Diego but not here?” Asked about the health risks, Christie pointed out that many store-bought appliance batteries still use cadmium. “Are we considering batteries dangerous?” he said.

Ken Smokoska, Business Development Director for the International Brotherhood of Electrical Workers and the National Electrical Contractors Association, who has worked and consulted on a large number of clean energy projects—including the one for San Diego Unified—was asked by the school board late last year about his projects. Smokoska told New Times he thought the advantages for rooftop arrays paid off in the long run and encouraged them to explore the option here.

“I told them the San Diego project really benefited those schools,” he said. “Jackson Elementary [in El Cajon], for example, was able to have 90 percent of their energy covered. They had two older roofs, but it still worked—they got their roofs and their power at a discount rate.”

“Remember that [the school district] is doing a good thing here, but it just may not be the right way of going about it. And they may be missing a great opportunity here to do it right.”