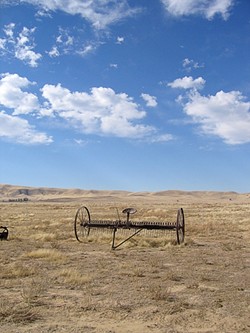 Sometimes public information is not in the public’s best interest. This, at least, is according to Ausra, Inc., one of three companies that want to build solar energy farms in the Carrizo Plains.

As a state commission begins studying whether the planned solar plants would harm local species, Ausra is asking permission to handle much of the approval process in secret.

Ausra on April 16 requested a protective order from the California Energy Commission. That order, if approved, would block the public from viewing results of an ongoing wildlife migration study. Ausra argues that revealing the information would “seriously undermine the interests of the public.”

Ausra wants to build a 177-megawatt solar power plant in the Carrizo Plains, but environmentalists and wildlife experts worry the plant could wreak havoc on local species, particularly the endangered kit fox and the tule elk and pronghorn antelope, whose populations are in recovery after having been endangered. Two other solar power companies, First Solar (formerly OptiSolar) and SunPower—both significantly larger than Ausra’s—are also planning to build facilities in the same sensitive area.

To address environmental worries, members of the California Energy Commission began mapping where the Carrizo animals migrate. They developed geographic maps that will eventually help show how roughly 9,000 acres of solar plants from all three projects could disrupt the migration patterns.

The first part of the study is done, but the next steps are the important ones. California Energy Commission Project Manager John Kessler said the new task is to determine how the migration patterns will change and what new habitat land needs to be created to minimize the impacts. Those next steps are the ones the public could be blocked from viewing if Ausra’s request goes through.

In a prepared statement Ausra spokeswoman Katherine Potter said the confidentiality would not interfere with the public’s ability to comment.

“Our request for confidentiality is very limited and was designed to avoid disclosing information that could create volatility in valuations of properties in the corridor study area.” She declined to comment further because the request is still in progress.

Ausra and other solar companies will eventually have to purchase and preserve nearby land to offset the environmental impacts from their projects. According to Ausra, if landowners find out their property is on the list they could jack up the sale price and possibly kill Ausra’s ability to finish its project. Since it’s a renewable energy project, Ausra officials argue the public cost would be too great if the project isn’t built. Thus, they say, if disclosing the study details would hurt the project, it would also hurt the public’s interest.

“I think that there’s going to be significant impacts that will be exposed and I think they [Ausra] don’t want those impacts exposed,” she said. “I think probably it’s a PR nightmare.”

In fact, there likely will be big impacts. Kessler said early results from the migration study already look like bad news for solar companies. “There is a high level of recognition amongst the energy commission staff that this project and the others that are within the purview of San Luis Obispo County … will vastly change the landscape and the conditions they live in currently.”

Ausra’s project is the smallest of the three and may therefore have the least impact on habitat. Company officials protested a cumulative look at all three projects during the environmental review process, but the energy commission held that each project has to be seen as a piece of the whole.

Ausra’s project is unique. It does not use traditional solar voltaic panels. Instead, Ausra’s design utilizes solar refractors that heat water, convert the water to steam, and use the steam to power a generator. Moving parts mean the energy commission has to review and approve the design. The other two projects lack moving parts and therefore fall under SLO County’s jurisdiction for approval. However, the energy commission is still considering all three projects together in the wildlife study.

“And certainly we recognize it’s difficult to have this type of change to a landscape that is so much in a natural setting as it is today,” Kessler said.

Ausra wants to keep information about the habitat lands confidential because people could take advantage. However, Bell noted, people in the area know why Ausra is there and they can still take advantage. Either a landowner learns their property is on Ausra’s list beforehand, she said, or they figure it out when Ausra officials ask to purchase the property.

Bell has collected about 75 letters from people who are protesting Ausra’s request. She plans to deliver them to the energy commission.

“My concern is without public comment and public review of this up until the end of the study that we don’t really have any guarantee that it’s being done appropriately or without bias,” she said.

Because the migration study considers all three projects, not just Ausra, if the information goes dark the public won’t see anything until habitat land is identified for all the projects.

That’s a long time, Bell said. “How do we even know this plant is in the public interest? They assume that it is but we won’t know until the evaluation is complete.”

Two members of the energy commission will decide whether to approve or deny Ausra’s request, Kessler said. The commission staff issued a statement calling for a review of the request based on arguments from both sides, but did not take a declarative position for or against.

Until then, it’s wait and see. And if the commission decides to make the studies confidential, the “see” part will be delayed for quite a bit longer, at least as far as the public is concerned.