Sold to the highest bidder 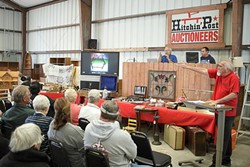 The sour economy has led to a general decrease in consumer spending but auctions have become a popular way to find deals and turn everything from electronics to antiques into quick cash. For one local family-owned auctioneer business, the increase in demand has even required them to move shop to a larger venue.

Kenneth Erpenbach, owner of the Hitchin’ Post Auctioneers in Templeton, runs the business with the help of sons Ken, Sam, Mike, and Tyler, his daughter Michelle, and wife Lynn. He says that even though the job involves a lot of fast talk, it’s a straightforward, easy way to make good money fo people in tough times.

“It’s the fastest way for locals to get cash,” Erpenbach said. “With Craigslist and eBay, you have to take pictures and have people come to your house. With an auction, you just consign it to us and we work to get the best price for it.” The auctioneers even offer to pick up items themselves and can manage on-site auctions for estate sales.

According to Erpenbach, one of the great things about the Hitchin’ Post is you never know what you will find. They specialize in unique antiques and collectibles, and also regularly deal with household items, appliances, and TVs. They’ve auctioned such other items as construction equipment, tools, tractors, and vintage automobiles. He said he is always on the lookout for “anything quality.”

“We’re not a junk auction, we don’t take garage-sale stuff,” he said. “We’re not high-end, but we’re not low-end, either. We’re kind of right in the middle.”

Erpenbach didn’t just waltz into this profession. According to him, auctioneering takes training, involving both business acumen as well as bid calling. He first went to auctioneer school in 2001, where he met and trained with professional auctioneers from across the nation. While he said it was a “wonderful experience” he admitted it was challenging, both mentally and vocally.

“We go from early in the morning, about seven, to about nine o’clock at night for ten straight days,” he explained. “We had drills, like little rhymes. They’ll have various words that sound similar and you just have to say them really fast. You know, ‘Red leather, yellow leather,’ and you have to say it frontward and backwards.”

Erpenbach admitted his lack of musical skills made bid-calling a little difficult at first. “Auctioneering has a rhythm to it,” he said. “You have to have a beat and a rhythm. That’s been the hardest part for me.”

The Hitchin’ Post has seen a dramatic rise in the number of items coming across its floor since they set up shop, he said. “With the economy the way it is, not only is there an increase in the amount of people selling their stuff and trying to get rid of it, but there’s also an increase in the people buying it because they’re hurt by the economy and they want a good deal.

“What’s interesting is that sometimes people come out way better than they expected. The majority of people, I would say, are quite pleased because we have a webpage where we take pictures of all the items and put them up. We basically advertise it for them.”

The Hitchin’ Post holds two auctions a month at the new building at 447 N. Main Street, Templeton. The next auction is scheduled for Saturday, May 30. Interested buyers or sellers are welcome to visit hitchinpostauctioneers.com or call 434-1770.

More than 30 local businesses have helped organize the SLO Gathering in Mission Plaza. All of the proceeds from the event will go to the Food Bank Coalition of SLO County. The event takes place from 5 to 9 p.m. on Friday, May 29. For more information contact Korie Newman at korie@downtownbrew.com. ...

Pitch in for National Hunger Awareness Day on June 2 by donating at least a dollar. This year especially, the Food Bank Coaliton of SLO County is counting on monetary donations to continue to put healthy food on the tables of at least 30,000 local residents. One dollar can be turned into seven meals. For more information, call 238-4664. …

More than 2,200 cyclists will be riding through SLO County June 2-3 as part of the AIDS/LifeCycle, the world’s largest annual HIV/AIDS fundraising event. Eleven SLO County residents will take part in the 545-mile trek starting in San Francisco on Sunday, May 31 ending in Los Angeles on Saturday, June 6. Cyclists will stay overnight at the Mid State Fairgrounds in Paso Robles on Tuesday, June 2. For more information, visit aidslifecycle.org/press-room.

Half the employees of North Coast Engineering rode their bikes to work on the sixth annual Bike to Work Day on May 20. Ken Brown commuted 25 miles.