'Solo: A Star Wars Story' is a fun space romp 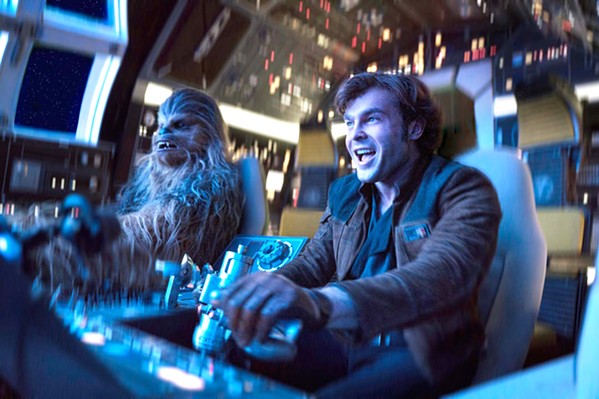 Glen Solo started with two different directors who were fired over "creative differences" before Howard took over, so there's a somewhat disjointed and uneven artistic vision here, but that doesn't stop the film from being a lot of fun. We meet Han and Qi'ra living in a slum and dreaming of getting out. The opening set piece is a rousing chase and escape in which we see both Han's recklessness and bravado. Things don't quite go as planned, and Han ends up in the imperial army, where his wisecracking nature does him no favors, but that's also where he meets Tobias and Chewy, who team up for a big heist that leads to another big set piece, this one involving a cargo train. There's plenty of action, lots of one-liners, and ample showdowns between the good guys and the bad guys, not to mention some double-crosses and surprises. In the same tradition of Episodes IV through VI, Solo offers up a classic space Western. It's not going to win any prizes for originality, but for Star Wars nerds, reverence for the series pays off here as we see the little bits of Han's backstory we've learned from the original films play out. I was wholly entertained.

Anna I count myself a casual fan of the Star Wars franchise. I've seen them all—the originals more than once, but the nitty-gritty minutiae of each character's arc are forgotten quickly. However, the iconic Han Solo's journey to be the rough and tumble, "I know" muttering badass is well deserving of its own feature film, and a fun one at that. We see Han when he still exudes the vulnerability that youth provides, but the same snarky wit and lofty sense of self. He's going to be a pilot, tell him any differently and you'll get a snide one-liner and an eye roll. Whatever murky path he has to travel to get where he wants to be, he will slog through the mud to get there. He's head-over-heels for his childhood love Qi'ra, a flame that continues to burn long after the two are separated. His quest to return to her is constantly interrupted by the need to survive, whether on the battlefield or in daily self-preservation, and by the time he can return, the chances are that she will be long gone. When he teams up with Tobias and Val for the notorious "one last job," things go haywire and he soon finds himself on the bad side of Dryden Voss, a nasty crime lord with a taste for blood. However, a chance encounter with Qi'ra and the prospect of time with her soon has him and the rest of his team once again hatching a plan to steal hyperfuel for Dryden as payment. It's a fun, somewhat disjointed, bumpy ride along with this cast of characters, and another successful addition to the Star Wars family, if you ask me. 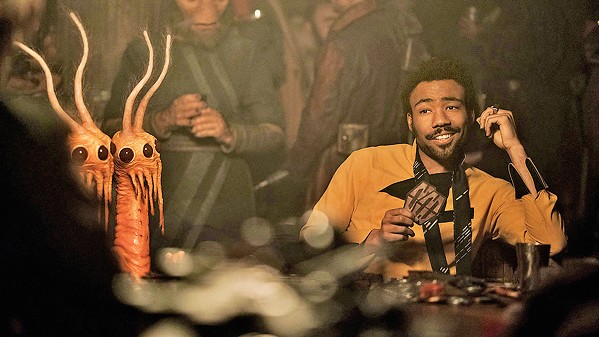 Glen I wasn't sure about Ehreneich as Han. I grew up watching Harrison Ford and I couldn't imagine anyone else in the role. There is a passing resemblance between the young Ford and Ehreneich, but instead of doing an impersonation of Ford as Han, Ehreneich makes the character his own. Glover, on the other hand, seems intent on channeling Billy Dee Williams as Lando Calrissian, but he does it so well, it's a treat to watch. Glover's star is certainly shining brightly right now. He was great as the host of Saturday Night Live a few weeks ago, and his music video for "This is America" has people talking. These two characters are interesting enough, and the actors have so much natural chemistry together that I would happily see another film with the pair. The story ends in a way that's begging for a sequel, and I'd love to see Lando and Han meet for another adventure. Solo is basically a popcorn movie—uncomplicated, emotionally one-note, and with little more than entertainment in mind. It's not the kind of film that sticks with you or challenges viewers in any way, but if you're looking for an engaging space romp, I think Solo delivers. Be warned, however, it's one of those rare films with a higher rottentomatoes.com critic rating (71 percent) than audience score (59 percent), so not everyone has liked the film as much a I have. If you're the rare person who's new to the Star Wars franchise, you'd be better off starting here rather than the joyless Episode I: The Phantom Menace. Solo at last knows how to have fun.

Anna It's certainly a movie to go into without high expectations for the storyline. This film is meant to entertain and gets that job done. It's zippy and funny, overly action packed, and the script readily sweeps over any complication that comes about. But hey, every movie doesn't need to reduce you to a puddle of emotions or leave you holding your breath in anticipation. Sometimes their purpose is to have fun, and Solo strikes that chord with vigor. I was also pleasantly surprised with Ehreneich's take on Han, not an imitation but instead a character all his own. There are definitely some shots in there meant to tie his looks to a young Ford, and while Ford will forever be thought of as the "real" Han Solo, Ehreneich doesn't seem discouraged from making character choices for himself. Lando was a high point for me as well; Glover is a funny dude. It's a fun way to spend a couple of hours with these space cowboys, and while it may not land in the camp of cinematic genius, it's a perfectly fine adventure to immerse yourself in for a couple of hours. Δ