A June 10 fight in Atascadero's Centennial Plaza that ended with a stabbing and an arrest for attempted murder was the last straw for a group of local parents.

The parents, many with kids who attend Atascadero Middle School across the street, penned a letter to the City Council asking what the plan was to ensure that incidents like that one don't happen in the future. Signed by more than 30 parents, the letter submitted as public comment for the June 22 council meeting referred to an increase of incidents near Centennial Bridge and Plaza, Sunken Gardens, and the surrounding area.

Parents said they had concerns about drug use and homelessness downtown that put their children, the community, and surrounding businesses in danger.

"The recent escalation of incidents includes stabbings, assault, drug use, an incident involving a man in the creek with a gun during school hours, and an arrest of a man for lewd and lascivious acts with a child under 14," the letter states. "This is the same area the middle school kids congregate with friends, get dropped off by parents for school, and even visit the local orthodontist office." 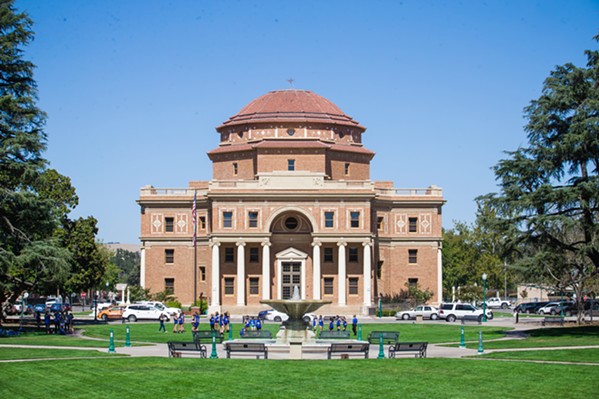 Stephanie Drexler, who emailed the letter into the city, told New Times that the area has always had issues with drugs and homeless people, but in the last couple of months the severity of the incidents has grown.

"My children go to the orthodontist right next door. I've witnessed several of the issues down there myself," Drexler said. "I've seen people walking around in their underwear. I've seen people smoking crack pipes. ... My kids are seeing that. I tend to not drop them at the little benches anymore."

Atascadero City Councilmember Susan Funk said the area where the little benches are—near Centennial Plaza—is a key area of concern for the city. The area is attractive to unhoused people, she said, because it's a shaded, nice area right next to the creek bed.

"People sitting on the bench in the shade in a park, you know, is a reason we have parks and shades and benches. It's not inherently different if that person is unhoused than if a person is there with their kids and their dogs," Funk said. "All of those things are legitimate uses of that space, and you can't just say some people get to be here and some people can't, legally."

That being said, Funk said that criminal behavior isn't OK, no matter who's doing it. And those committing crimes should be arrested. While the suspect in the stabbing was arrested, the SLO County District Attorney's Office declined to file charges in the matter. Drexler said she heard the suspect is back on the streets.

"After a comprehensive review of the referral ... it was determined that criminal charges were not justified on either party," Assistant District Attorney Eric Dobroth said. "The event involved an argument that quickly escalated when one party produced a knife and the other a baseball bat is reasonably viewed as mutual combat resulting in both being struck with the bat and one being stabbed."

Drexler acknowledges that the issue has many layers, and she doesn't expect the city to clear out the area. There are mental health needs, housing needs, and other social service needs, Drexler said. But, she added, parents want to make sure their kids are safe when they drop them off for school. Parents, Drexler said, are just looking for a plan of how to ensure the safety of their children now and when school starts again in August.

"It was definitely time to step up and step in," she said. "Last year, the parents would just hang out down there and kind of be vigilantes."

The area is currently closed for some maintenance and renovation work the city plans to do in the area. The letter and a corresponding presentation on the issue from Atascadero Police Chief Bob Masterson at the June 22 meeting are just a starter for a longer discussion, Funk said.

Ideally, Funk said, the discussion over what actions need to be taken in the future should occur in a setting where there can be a back and forth—which City Council meetings aren't necessarily conducive to.

Masterson said the police department had increased patrols in the area as well as Community Action Team (CAT) outreach, which focuses on incidents involving residents who might have mental health issues. In fact, the CAT team had engaged with the group in Centennial Plaza on June 10 about 20 minutes before the fight and stabbing occurred, he said.

"It's not every day in Atascadero where you have a fight in Centennial Gardens where somebody gets stabbed. That was kind of a first," Masterson told New Times. "It's actually quite an abnormality with the population that we're dealing with."

While there is a criminal element to some of the houseless, Masterson said it's mostly few and far between. The majority are just folks who need assistance.

Police officers have been in contact with a core group of about 10 people who hang out in Centennial Plaza, Masterson said, and they don't want assistance of any kind. As long as they aren't breaking the law, he said there isn't much the police department can do: "They have rights like everybody else."

Although he couldn't speak much about the incident involving lewd acts with a minor, Masterson confirmed it was reported. He said the report of a man with a gun occurred under the Lewis Street overpass near the middle school, which was locked down. The gun turned out to be a Daisy Red Ryder BB Gun "just like the movie."

"It ended with very little result, but we did end up arresting him," Masterson said. "Juveniles were throwing rocks at the tent, and he came out brandishing a weapon."

The Atascadero Police Department is using Measure D-20 tax dollars to start a new outreach team that Masterson said will focus specifically on houseless residents. Although the CAT team is an asset, it takes care of and assists all residents with mental health issues, connecting them with SLO County mental health services. The Outreach to Underserved Residents (OUR) Team's sole purpose would be to actively engage the homeless community daily, try to meet houseless people where they're at, and connect them with services.

It's something that can't happen soon enough, Masterson said, adding that the department is still trying to flesh out the details.

"Law enforcement doesn't always want to be the hammer," Masterson said. "If you look statewide, everybody is looking at, OK, what can we do differently."

However, he said, there is a limit to what his department can do. As a matter of practice, law enforcement is a responsive agency: responsive to incident calls as well as changes that the state has voted for such as prison realignment and new thresholds for certain types of crimes designed to reduce the number of arrests and time spent in prison or jail.

He ties an anecdotal increase in homelessness to some of those changes, but adds that law enforcement is stuck in the middle of two groups of people: Those who want the police department to do more to address issues such as homelessness and crimes associated with the population and those who don't.

"It's an interesting cycle that we're in. It's not insurmountable, but law enforcement really needs to take a step back and really look at the way we did things in the past and the way that we need to start doing things in the future," Masterson said. Δ