The group of concerned parents and community members were vocal when talks of including personal development lessons in Lucia Mar Unified School District (LMUSD) curriculum made the rounds over the summer.

"I reviewed the entire curriculum from grades K to 6, and in my opinion, the primary tone is social justice critical race theory, which I believe has no place in Lucia Mar," school board member Dawn Meek said at the Aug. 3 district board meeting. "I believe it's letting the bad guys into our classrooms, ... the mission statement of the people that put this curriculum together, it's a Trojan horse, and I'm strongly against it."

In August, LMUSD's board voted to incorporate programs like Caring School Community, Second Step, and CharacterStrong for elementary, middle, and high school, respectively. The three programs deal with instilling healthy coping mechanisms in children. The wide range of topics cover treating others kindly, recognizing bullying, and self-managing anger and anxiety.

School officials told New Times that the programs were meant to ease the stress of returning to in-person education after the pandemic forced students to unexpectedly study from home for more than a year. A coalition of teachers, school counselors, and administrators planned the curriculum.

This was also not the first time that LMUSD considered social and emotional learning. Former district Parent Teacher Organization member Julia Voge said that the district had been thinking of introducing it since 2018, but the criticism of it is new. Voge is a former grade school teacher. She has two sons in Arroyo Grande High School.

"I support the curriculum. Children of color don't get to decide if they're old enough to learn about exclusion and racism. To suggest that just because our children are exempt from the impacts of being of a different race or culture doesn't mean they should be exempt from how that impacts people," she said.

CharacterStrong—the high school-level curriculum—details practices and strategies to make schools more inclusive by identifying how racism shows up in educational spaces, according to its blog. Program staff told New Times that CRT, which is college-level discourse often featured in law schools, isn't taught.

"CharacterStrong is not grounded in critical race theory nor does it teach CRT," CharacterStrong co-founder John Norlin said. "There are no student lessons related to legal policy or law, nor do we offer content that implies that people or institutions are inherently racist. We believe in serving each school system and its community where they are at and not imposing political ideologies or agendas." 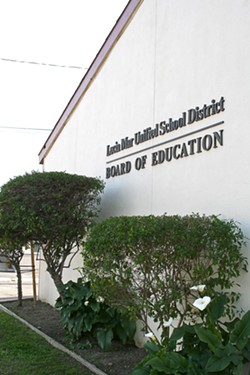 CRT examines the systemic nature of racism through policies and court decisions that can disadvantage underrepresented groups—even if they are framed neutrally. School officials acknowledge that CRT couldn't be taught to grade school students, especially because it's an advanced academic theory.

"It would be like teaching international law to second graders," school board member Colleen Martin said.

At the Aug. 3 meeting, LMUSD Assistant Superintendent Hillery Dixon said that aspects of the development programs were incorporated into Monday morning meetings, and that CRT isn't being taught. Amy Jacobs, the school district's public information officer, confirmed this.

"We do not train our teachers to discuss critical race theory. Rather, we provide training to teachers on how to discuss potentially controversial issues in their classrooms in a fair and unbiased way, in accordance with our board policy," she wrote in an email to New Times.

But parents who believe social and emotional learning (also called SEL) is rooted in CRT don't feel comforted by the board's vetting process. Many such parents belong to Central Coast Families for Education Reform (CCFER), which was started in 2020 by several parents who came together with the goal of returning their children to in-person learning.

"They told us, 'We're not going to give full access of the curriculum to teachers. Teachers are only allowed to teach what we give them.' But there's nothing in writing. There's really no assurance other than a handshake," concerned parent and CCFER member Jeanette Holt said.

Holt—mother to a seventh, a ninth, and an 11th grader—and some other parents met with Assistant Superintendent Dixon on two separate occasions to review the curriculum. Holt said that Dixon controlled the navigation process throughout and that parents couldn't thoroughly examine the documents.

But the district's public information officer said that wasn't the case.

When Holt researched what SEL could mean, she said she found ties to equity and the Black Lives Matter movement, which worried her.

"Equity is not equality. Equality is great. Equity is 'your friend doesn't have what you have, and that's not fair.' You have to share, no mind that you worked for what you got and your friend probably didn't," she said.

Christin Brittingham, a concerned parent, said that her rejections of SEL and teachers addressing race issues in class don't mean that she wants history to be erased. She feared that teachers would pass on information that would make white children feel bad about their race. Brittingham, who said that she no longer holds the position of being CCFER's communications director, said that she doesn't believe white privilege and systemic racism are real.

"Just because, maybe my ancestors, which I have no idea if they did, ... but I'm a white human and maybe there were some slaves in my history. But that doesn't mean I have a slave and that I should [feel] bad for it. OK, this is history, we're learning from it but we don't do that anymore," she said.

Holt and Brittingham both said that they'd heard about a former history teacher at Judkins Middle School who pushed an "agenda" by handing out an assignment to her eighth graders that criticized President Donald Trump. Brittingham sent New Times a screenshot of part of the assignment, which focused on a New York Times opinion piece about the hate directed toward Asian Americans during the pandemic. It included both biased and factual statements, including Trump labeling COVID-19 as "Kung flu" and the "China plague."

The teacher, who wished to remain anonymous, told New Times that the lesson plan aimed to teach students to recognize the differences between a news story and an editorial opinion. Students were also asked to analyze the article critically and jot down their reactions. Taught during the 2020-21 school year, the lesson wasn't part of the district's new social and emotional learning curriculum.

"I would hope SEL even would address race, not just for people of color but [also] for white children to know about whiteness. It doesn't mean anyone is attacking them," said Roof, who is a Lucia Mar Forward representative.

Lucia Mar Forward is a response to CCFER's effort to recall board members Don Stewart, Dee Santos, and Martin for their votes on COVID-19 issues. Roof said that she hasn't seen many parents engage with CCFER over the curriculum, but it's clear that the national worry around critical race theory has reached SLO County.

"Some of it is part of being in a small town that is overwhelmingly white—fear [from] not talking to people different from you," she said. "The area is pretty resistant to change." Δ