It takes a certain level of tenacity to keep an essentially newborn business afloat during a pandemic and resulting economic downturn, and at this point, that's all hairstylist Amy Maggipinto has left.

Though nothing quite compares to the challenges she faces now, a near 20-year career in hair has put Maggipinto through a lot of ups and downs. Maggipinto and her two best friends opened their Avila Beach-based salon, Kindred Beauty Collective, about three years ago after their previous employer suddenly went out of business. Not wanting to give up their beloved salon space, located in the heart of Avila Beach and complete with ocean views, Maggipinto and two longtime colleagues pulled together all the money they could to pay the rent, renovate the gutted space, and reopen the salon as their own.

And now they're fighting to keep it alive.

"We are not giving this business up," she told New Times. 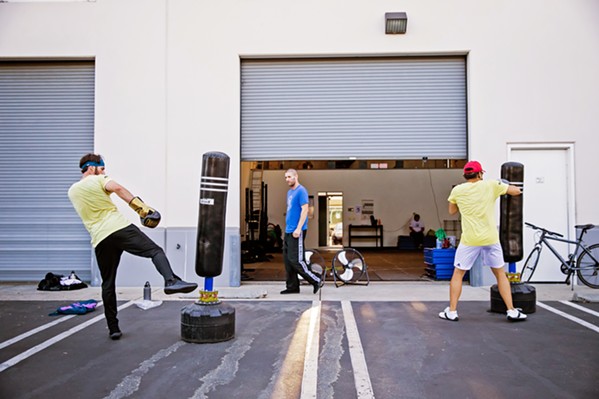 Kindred shut down on March 19 as part of the state-mandated effort to stop the spread of COVID-19. Unlike tens of thousands of other businesses on the Central Coast, Kindred hasn't been able to obtain the loans and grants that are keeping so many others up and running.

More than 15,000 businesses in California's 24th Congressional District—which includes all of SLO and Santa Barbara counties and part of Ventura County—applied for and received loans through the federal Paycheck Protection Program (PPP). Launched in late March at the onset of COVID-19, the $660 billion PPP enabled businesses nationwide to apply for up to $10 million in forgivable loans to retain employees and cover basic expenses during stay-at-home orders.

That program and other loans offered through the U.S. Small Business Administration have kept thousands of businesses from closing down for good, but some haven't been so lucky. Some of the smallest local businesses—those with only a few independent contractors on staff or a single person who owns and operates the business alone—say they've been left out of much of the federal and state financial aid aimed at helping businesses survive the pandemic.

About 2,333 PPP loans amounting to $150,000 or more went out to businesses in the 24th Congressional District. None of those went to independent contractors, according to data collected by the Small Business Administration. Two loans were awarded to self-employed individuals, and 71 to sole proprietors, accounting for only about 3 percent of all the loans.

Those kinds of businesses had more luck with loans amounting to less than $150,000, but still struggled. Of the 13,144 smaller PPP loans that went out to the 24th Congressional District, about 2 percent went to independent contractors, 30 percent to sole proprietors, and a little more than 3 percent to self-employed individuals.

Maggipinto and her colleagues at Kindred applied for PPP right when it came out. They were denied. There wasn't any specific information about why, but she assumed it had something to do with her being self-employed. She applied for a grant through the SLO Chamber of Commerce and didn't get that one either.

To make matters worse, Maggipinto and her coworkers weren't eligible for unemployment benefits until April 28, when the state launched the Pandemic Unemployment Assistance program aimed at offering benefits to independent contractors and the self-employed.

Kindred offered at-home hair color kits and raised enough money through a GoFundMe campaign to pay rent and buy safety equipment—masks, hand sanitizer, cleaning supplies—for the salon. It looked like they'd made it through the worst when salons were allowed to reopen on June 9, but after surging cases of COVID-19 statewide, Kindred was forced to close again on July 15.

Salons are allowed to do cuts outside, but Maggipinto said they're not allowed to do color, which accounts for about 90 percent of Kindred's profits. Plus, she said, her salon doesn't have an outdoor space to work in.

She's followed all the rules and heeded all the advice, but it hasn't paid off. Now she's back to relying on donations through Kindred's GoFundMe.

"I don't want to lose this business," Maggipinto told New Times. "And I just feel like people need to know what this is doing to us and our entire industry."

When COVID-19 hit, Mahan said the Small Business Development Center made sure its staff and consultants were trained and available around the clock to help local businesses apply for grants and loans—including PPP and Economic Injury Disaster Loans—through the Small Business Administration. They helped hundreds of local businesses obtain roughly $20.6 million in capital, but Mahan said even for her staff, the application process was confusing.

"You have to remember, it was crisis mode," she told New Times. "We worked with more clients in three months than we did in 12 last year. I mean it was insane."

The Small Business Administration tried to make financial aid available as quickly as possible, and Mahan said that led to some issues. The first online application portal crashed every few minutes and its initial replacement wasn't much better. Businesses hoping to apply for PPP loans were required to go through their lenders, and banks were so swamped with applications that many could only help existing clients.

Plus, like everything COVID-19 related, information about PPP is always changing. Mahan said the Development Center received updated clarifications and guidelines on loans from the Small Business Administration nearly once a week when PPP was first released.

"So they tried to make it as simple as possible," Mahan said, "but when it came down to implementation, a lot of questions arose."

Some of those questions still exist, especially for businesses hoping to get their loans forgiven. For PPP loans to be forgiven, they have to be used to keep employees on staff. Some worry that independent contractors and sole proprietors will struggle to prove their loans went toward payroll protection.

And for business owners who were denied PPP and other relief, more dire questions remain.

He applied for a few other forgivable loans and grants and didn't get those either. His commercial landlord couldn't give him a break on rent. So he's been stuck hosting classes outside and online—anything to make a little money. He wonders why some businesses have been able to get everything they've applied for while others like his are left with nothing.

"We all pay taxes," he said. "We should all be able to get the same access to benefits."

Zimmerman said he just hopes he's able to open the gym soon. He believes the pandemic is serious and that the spread of COVID-19 needs to be stopped, but the shutdown is starting to become life-threatening too.

"I think it's unrealistic to expect businesses to be shut down with no help for an undefined period of time and be expected to survive," he said. Δ