Some whistled along as classic rock piped through the radio.

The task of the day: digging a trench for a French drain separating the Santa Margarita Community Center’s basketball and tennis courts from a hillside leading up to the Community Church, and filling it with gravel. The purpose: to prevent flooding that frequently plagues the area, so that a number of volunteers—including sheriff’s deputies, private residents, business owners, and local Pastor Robert Campbell—can kick off the Sheriff’s Department’s first-ever Activities League for afterschool programs in Santa Margarita. 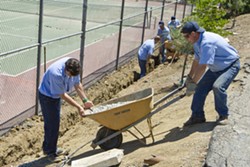 The afternoon’s effort was being directed by Santa Margarita resident Joe Chinander, who took a day off from work to direct the drain’s completion. As New Times reporters pulled up, Chinander was overseeing the final steps of this stage, and one inmate—who’s not being named—gave him a thumbs up and a cheerful “You got it, boss!” before returning to shoveling gravel into a wheelbarrow.

This was the third day Sheriff Ian Parkinson granted the inmates a day of work at the center over the last few weeks, a relatively new phenomenon that everyone involved told New Times has provided the kick needed to get the project off the ground—with little expense to taxpayers.

And according to Chinander, the inmates—low-level, non-violent offenders—dig it, too. He added that one individual was set to be released the next day, and volunteered to come back and help should he be needed.

Sgt. Rex Reece, who’s heading the activities league on the department’s end, told New Times that the Sheriff’s Activities League in Santa Margarita was born out of town hall meetings with residents while Parkinson was out on the campaign trail, and the community center was seen as a natural facility for the afterschool program.

The hope is to soon use the tennis courts for tennis lessons, as well as a site for a skate park with mobile ramps. Unfortunately, the tennis court flooded every time it rained.

Work on the drain is now complete, but the Sheriff’s Department still needs volunteers to help lead the new activities league—people to lead art classes, lend expertise to a possible community newsletter, and help run various activities and sports lessons, Reece said. Interested parties can contact him at 305-8315.

To secure some funding for the program, the department will be host to a fundraiser at Gus’ Grocery in SLO from 5 to 7 p.m. on Tuesday, May 28. Parkinson will be on hand to serve up his own signature sandwich, “the Posse;” proceeds from which will benefit the activities league.