Drawings on display at the SLO Art Center

For centuries, drawing was considered a lesser art form, a skill employed only as a step in the process of creating a true piece of art: a painting or sculpture. 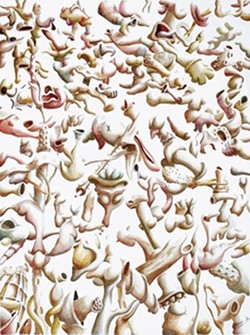 “That’s something that I believe has changed in the last 15 years,” said Tim Anderson, the former SLO Art Center curator whose drawings will be featured at the center through August 17. “There are now contemporary artists whose entire body of work is drawing. I think it’s become a little more acceptable. It’s still an exception but the prejudice isn’t as big.”

Before Anderson began drawing his images, in which a head of broccoli lazily floats past a smiling worm—or so it seems to the viewer—he created allegorical paintings steeped in symbolism and political commentary. And before that he was, of all things, a history student. When he happened to walk by a figure drawing class, he recalled his fondness for art, so he changed his major.

After college Anderson moved to Los Angeles with the intention of becoming a big name in the gallery scene. Instead he ran a frame shop, and painted out of a studio in his garage. While his artistic endeavors weren’t unsuccessful, Anderson decided that much artistic success comes from the ability to market one’s self and one’s art, a skill that didn’t come naturally for him.

Eventually, Anderson needed to repurpose his garage, and he found himself without a studio. He couldn’t work with oils in his house and he spent an unhappy six months deprived of an artistic outlet before he turned to drawing. His earlier drawings were done in much the same process and style as his paintings, with heavily researched narratives emerging from the pages of his sketchbook. He quickly realized that the stories that unfolded on canvas over the course of two months took a lot less time to emerge from the tip of a pencil. Anderson was running out of stories. So, he made a bold decision; he would develop a method of creating images without any narrative direction.

“That’s when I developed this doodle/ scribble process,” he said. “I wouldn’t have to think. I could just react to what was on the page.” Anderson begins each drawing by closing his eyes and sketching across the page with a number two pencil in his left hand. (He is naturally right-handed.) He works across the page from all different directions, deliberately varying the shape and length of his strokes.

As Anderson scribbles, a previously unseen world of images come tumbling from his mind, part plant, part machine, and sometimes a hybrid man-

machine construction. Like a latter-day Frankenstein, Anderson freely connects and reconnects without any regard for reality. He’s still surprised by what emerges from his subconscious imagination, though the funny little shapes aren’t nearly as unexpected as they once were. Over the course of the past 15 years Anderson has developed a lexicon of images that reappear in his work. A mushroom cloud is one of those symbols. Another that began to appear after a trip to Thailand last year is a decorative plant with leafy petals, a popular decorative motif in Thailand.

While many of Anderson’s images look like nanoscale life forms existing beneath the eye of a microscope, they’re not unlike inkblot drawings, a comparison that puts Anderson in mind of observations drawn by a psychologist after seeing his drawings.

“When I was in Los Angeles and I was just starting to draw this way, I belonged to a group and one of the members was a psychologist. I found out I should never show my work to a psychologist because he had a field day with my images,” he explained.

After sketching out the creatures conjured by his imagination using a graphite pencil—between 2B and 9B—Anderson retraces each drawing with turpentine. Sometimes he uses shoe polish, an artistic tool he insists that he discovered out of sheer laziness, not wanting to go to the trouble of mixing a lot of different materials. He also utilizes walnut ink, sometimes with watercolors for the one in 10 paintings that he decides to lighten with color.

Having worked as the curator of the SLO Art Center for seven years, and serving as gallery director of the Cuesta Art Gallery for the last year and a half, has provided Anderson with a lot of insight regarding the community’s taste in art, but he isn’t drawing to cater to that taste. In fact, he has resigned himself to the fact that he probably won’t sell any of his pieces. But that doesn’t mean that he isn’t expecting a warm reception from his fellow local contemporary artists. In the past year, he’s been steadily receiving more exposure on a national level, resulting in a profile in a magazine called New American Paintings. In October he’ll be featured in another national periodical, Studio Visit Magazine.

Anderson might hope that viewers discover something illuminating, or just plain intriguing about his drawings but, for him, their value was established during the creation process. As long as Anderson enjoys creating his ex nihilo drawings—Latin for “out of nothing”—he intends to continue.

“I’ve always believed that artists are basically like alchemists and their studio is their laboratory. You take these non-sacred materials and you make these sacred objects. That really is how I believe things are made in the studio. Basically they come from nothing. It’s all about work,” he concluded. “But it’s fun.”

Ex nihilo—drawings by Tim Anderson will be on display at the SLO Art Center (1010 Broad Street) through Aug. 17, with an artist reception Aug. 1 from 6 to 9 p.m. and a slide presentation at 7 p.m. For more information visit www.sloartcenter.org or call 543-8562.

Arts Editor Ashley Schwellenbach is neither no one nor someone. Send philosophical ramblings to aschwellenbach@newtimesslo.com.