Something to Crow about

At 49, she’s still drop-dead gorgeous, still has a stunning voice, still writes amazing songs, and she can look back with pride at collaborations with the likes of The Rolling Stones, Michael Jackson, Eric Clapton, Luciano Pavarotti, John Mellencamp, Kid Rock, Sting, and others.

Her debut is currently being re-issued as a commemorative set, and her most recent album, 100 Miles From Memphis, is a testament to her earthy, small-town roots.

“I grew up in a small town 100 miles from Memphis, and that informed not only my musical taste, but how I look at life,” she said in press materials. “The drive to Memphis is all farmland, and everyone is community-oriented, God-fearing people, connected to the earth. The music that came out of that part of the world is a part of who I am, and it’s the biggest inspiration for what I do and why I do it.” 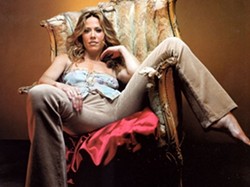 There are still tickets left to see Sheryl Crow at the OPTIONS Music Festival on Sunday, May 22, starting at 1 p.m. at Avila Beach Golf Resort. I’m reminding you about the show a week ahead, because it appears this show will sell out! Tickets are available online through Vallitix.com or calling 1-888-825-5484.

The show will kick off with a set by up-and-coming local act Lakes, which features members of the now-defunct Watashi Wa.

“As a band, Lakes is super pumped to be playing this show,” said band member Matt Covington (vocals, accordion, piano, mandolin, guitar). “We’re honored to be part of the lineup that’s making money for such a great cause. We know a lot of people in the Options Family and with the state budget cuts, they were hit hard and we know they can use anything and everything they get, and what they get is for the benefit of others. So we’re going to show up ready to pull our weight and get this thing off the ground and started right. Give people their money’s worth. We really couldn’t be more excited.” (Covington also mentioned that Lakes plays Thursday, May 19, at SLO Brew with the Honey Trees.)

Hot Buttered Rum will also perform at OPTIONS. The former string band has evolved into an eclectic and electric powerhouse of Left Coast Rock, moving effortlessly between jazz, country, and world music influences.

OPTIONS is a Central Coast nonprofit organization dedicated to helping people with disabilities since 1984. It serves more than 200 people with developmental disabilities and traumatic brain injuries daily! The group offers services in unique, community-based settings such as residential living services, rehabilitation therapy, and vocational training services. Hear some great music and support a great cause!

Though there’s only one remaining member from the original 1964 Moody Blues lineup, it hardly matters, since the band’s real genesis can be traced to their groundbreaking 1967 recording Days of Future Past, which fused rock and classic music together in a completely original way. All three current members were on hand for that seminal achievement, and now Justin Hayward, John Lodge, and Graeme Edge are bringing their lush hit machine to the Performing Arts Center on Wednesday, May 18, at 8 p.m. Tickets cost $40 to $85, available by calling 756-2787.

If you think these guys are forgotten, think again.

“‘Nights In White Satin’ recently re-entered the UK rock charts at No. 2 again—for the unbelievable fourth time in their 40-plus years touring and recording,” said their manager Lori Lousararian. “The success followed a performance of ‘Nights’ by Simon Cowell’s X Factor winner Matt Cardle.” 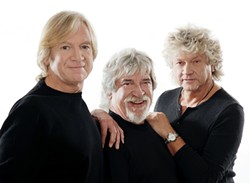 All told, The Moody Blues sold more than 70 million albums world wide and have been awarded 14 platinum and gold records, driven in part by hit singles such as “I’m Just A Singer (in a Rock and Roll Band),” “Ride My See Saw,” and “The Story in Your Eyes.”

See why Rolling Stone calls this band “the Sistine Chapel of pop music.”

SLO Brew on the loose

Alt-rock darlings Pinback kick off the week at SLO Brew with a show on Thursday, May 12 (8 p.m.; all ages; $16 presale or $18 at the door). Said Zack of Pinback in press materials, “These shows will be much different than the past 10 years that we’ve toured. We’ve decided to have some fun and present our songs in a new light. Instead of playing our songs the traditional way by having a backup band play all of our extra parts, we thought it would be entertaining and fresh for just the two of us to play live. The idea is to present our music at times in a more broken down manner, very similar sounding to how it might be for Rob and I when we’re coming up with a song for the very first time.”

Local powerhouse PK, which won the New Times Music Awards “Album of the Year” last year and was in the running with a handful of other up-and-coming bands to appear on the cover of Rolling Stone, plays the Brew on Friday, May 13 (7 p.m.; all ages; $9 presale or $10 at the door). “It’s going to be a masquerade show since its the ever unlucky Friday the 13th,” said the band. “Expect creepy lamps and fog and a ton of people wearing masks. Those who wear a mask get entered to win an awesome PK prize, though we want anyone to come, mask or not.” Fierce Creatures will open.

On Saturday, May 14, soulful and funky Afro-beat act Orogone hits the stage (8 p.m.; all ages; $10 presale or $12 at the door). The group recently released its sophomore effort, Cali Fever, calling it “a giant step from anything we’ve ever released in the past.”

Don’t forget about the Karen Tyler, Valerie Johnson, and Al B Blue show on Thursday, May 12, at The Porch. Karen Tyler’s been on hiatus for a while, and it’s sure great to see her back in the music scene (6:30 p.m.; all ages; pass-the-hat). “Two big voices that blend like sister-singers, two guitars, side orders of resonator, mandolin, and dobro, and the bring-it-on home drive of Miss Val’s washboard playing provide an old-time charm that pleases the ears and feeds the soul,” said co-promoter Bonnie Nelson.

Then on Sunday, May 15, Sculpterra Winery’s showcase features Luis Oliart.

“He was such a big hit when featured at our other showcases, we thought we’d share him with Sculpterra,” Nelson said. “His talent as a guitarist, singer, and songwriter has been described as ‘simply magical,’ ‘totally captivating,’ and ‘compelling.’” (1 p.m.; all ages; pass-the-hat). 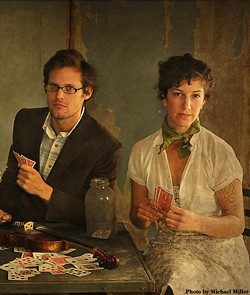 Finally on Tuesday, May 17, Kreuzberg hosts Old Sledge, “a trio of young musicians bringing new life to traditional folk songs.” (6:30 p.m.; all ages; pass-the-hat). They’ll be joined by Natalie Angiuli, an L.A.-based singer-songwriter, who after her set at Kreuzberg will play Frog and Peach at 8:30 p.m. that same night.

Remember that all of Steve Key’s Songwriters at Play showcases feature several other performers playing four-song sets, so there’s always plenty of variety. 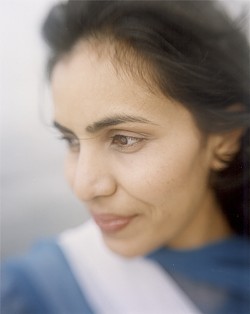 Don’t forget about the Schweta Jhaveri show at the Monday Club on Thursday, May 12, at 8 p.m. I recently listened to anahita, her lush and lyrical 1998 recording, and was spellbound by her arresting voice and the exotic raga sounds contained within. She’s backed at this show by some high-profile musicians: Will Bernard, a headliner at this year’s Live Oak Music Festival; viola player Eyvind Kang, featured on Bill Frisell’s latest release Beautiful Dreamers; and drummer Scott Amendola of Charlie Hunter and T.J. Kirk fame. Tickets cost $20 presale (Boo Boo Records and brownpapertickets.com) or $25 at the door.

With undeniable on-stage chemistry, husband-and-wife duo Sweet Talk Radio delivers earnest alt-folk pop songs, featured in numerous television series and commercials. Their new CD My Hallelujah—written and produced in their home studio in L.A.—has been called a cinematic journey for the ears. GoodWaves Productions presents Sweet Talk Radio on Thursday, May 12, at 7:30 p.m. at the Steynberg Gallery. Tickets cost $13 advance, $15 at the door, available at the Steynberg. Kids younger than 18 get in for $5.

The NOW! Trio—an Oregon-based Afro-Cuban, funk, rock, and nu-jazz collective—plays two shows: Thursday, May 12, at Frog and Peach from 8 to 9:30 p.m. (free); and Friday, May 13, at D’anbino Vineyards and Wine Cellar from 7 to 9:30 p.m. ($5). The band is fronted by Tim McLaughlin of Eleven Eyes. If you like “Meters, Herbie Hancock, Zony Mash, Grant Green, Nirvana, John Scofield, Lee Morgan, the Beatles, Bill Frisell, and Latin dance music from throughout the Caribbean, the NOW! Trio always put on a diverse show that is heavy on the groove,” McLaughlin said.

Check out some recycled fashions and hear music by Jessica Lindsay Meyer and Natalie Haskins at the “Eco Show,” happening Friday, May 13, at Creeky Tiki. The music kicks off at 7 p.m. followed by the runway show of sustainable fashion for men and women at 9 p.m. The cover is $3, with proceeds benefiting ECOSLO.

The West Coast Jazz Cartel plays the Bay Club at the Inn at Morro Bay on Friday, May 13, from 7 to 10 p.m., featuring New York veteran Karl Welz on saxophone, Ryan Garcia on guitar, Clint Iwanicha on bass, and Mike Raynor on drums. This is a tight little combo you won’t want to miss!

On Friday, May 13, the Steynberg Gallery presents Anne Walsh at 8 p.m., performing songs from her album Pretty World, a Brazilian-influenced recording. Hear compositions from the likes of Jobim, Sergio Mendes, and Astrud Gilberto, but also standards from the Great American Songbook, including Cole Porter and George Gershwin.

SLOfolks has another treat in store for folk fans. Even though you may not have heard of Scottish-born performer David Francey, he’s a guy you’ll want to know! The three-time Juno Award-winner has been called Canada’s best folk singer, a real poet whose songs reflect a keen eye for real people, places, and human emotion. See him at Coalesce Bookstore (772-2880; $20) on Friday, May 13, at 7 p.m. and at Castoro Cellars (238-0725; $20) on Saturday, May 14, 7:30 p.m. Craig Werth will be performing with Francey, with voice, bouzouki, banjo, mountain dulcimer, and shruti box.

Enjoy an evening of Mexican music by Laura Rebolloso of Xalapa Veracruz on Saturday, May 14, at 8 p.m. in the SLOMA ($20 presale tickets at Boo Boo’s or $25 at the door). “Laura is one the best musicians in the Son Jarocho tradition from Veracruz,” said promoter Pedro Arroyo. “She is playing with an outstanding lineup of musicians from Los Angeles and Seattle.” 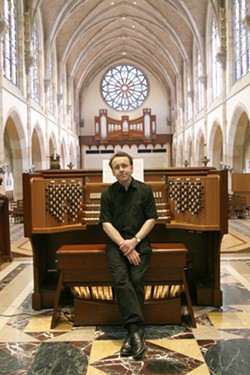 Britain’s David Briggs, an internationally renowned organist who has built a worldwide reputation as an innovative musician and dazzling performer, plays Saturday, May 14, at 8 p.m. in the Performing Arts Center’s Cohan Center. Hear a program that includes Haydn, Bach, and Franck on the famed Forbes Pipe Organ, plus an improvised accompaniment to Charlie Chaplin’s classic silent film, The Immigrant. Student and adult tickets range from $16 to $24 (756-2787).

On Sunday, May 15, the Famous Jazz Artist Series at the Hamlet presents its annual showcase for the talented young jazz musicians of the Central Coast. Combos from Cuesta College (directed by Ron McCarley) and Cal Poly (directed by Paul Rinzler) will perform at one show only, 4 p.m., for $15. Call 927-0567 for reservations.