Somewhere over the rainbow

Will & Grace fans fondly remember Leslie Jordan as a sassy little man cutting loose casual zingers. (“Well, well, well, Karen Walker. I thought I smelled gin and regret.”) But there’s so much more to know about this comedian and Emmy-winning character actor, who will perform at this year’s Central Coast Gay Pride celebration. Jordan is also the author of the fabulous biography My Trip Down the Pink Carpet—an account of his TV career, struggles with substance abuse, and experiences coming out as a gay man in the Deep South. To properly enjoy the following interview with Chattanooga-born Jordan, try reading it with a thick Southern drawl interspersed by high-pitched giggles. 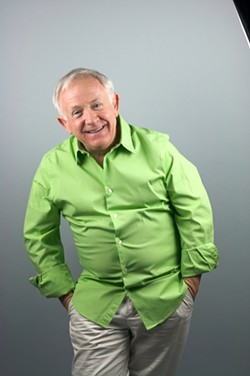 NEW TIMES So when was the last time you were in town?

LESLIE JORDAN Years ago I got a degree in theater from the University of Tennessee at Chattanooga. I didn’t know what to do with it, and my professors suggested that I go to New York, on my own dime, and audition for the University of Resident Theater Auditions. You go to an audition in an auditorium filled with 1,000 people, and they’re looking for, you know, summer stock actors, some of them are looking for possible candidates for their masters programs in theater, so a lot of opportunities. Well, I had this really thick Southern accent, which I didn’t even really know, because I hadn’t been out of Tennessee much. And I did a Shakespearean monologue, and people just started laughing! It wasn’t supposed to be funny! This guy came up to me, John Schlenker, the guy at the Melodrama in Oceano. I went to work at the Melodrama, and that’s how I began my career. I fell in love with the Central Coast, because it reminded me so much of the South. I always loved San Luis Obispo because of the college kids. Thirty years ago, there used to be this nude beach called Pirate’s Cove …

JORDAN … And we’d go to Pirate’s Cove. When I was in college, we were so conservative! They used to have nude volleyball games, Cal Poly. Now, the girls wouldn’t take their bottoms off. They were just kind of topless. But the boys were just lettin’ it flop. I was fascinated. I would spend hours watching the Cal Poly kids play nude volleyball. So I’ve got quite an attachment.

NEW TIMES Having participated in so many Gay Pride events over the years, do you think it’s still necessary and helpful and cathartic to the gay movement? Could you ever see it as having a negative effect on the gay community?

JORDAN The only negative effect I can see at Pride celebrations is that the media always jumps on the fringe aspects; they don’t jump on the beauty of where the gay movement is right now. When I was a kid, coming out, you had one option, and that was the gay bar. That’s the only place you could meet other gays. Now, my God, they have everything, from gay outdoors groups to gay theater groups to gay choruses. Is it necessary? I think it is. Gosh, it’s grown! I still get misty-eyed when I see boys—or girls—walking down the street hand in hand. I want so badly to pull them aside and say, “Do you have any idea what we went through, just to walk down the street and hold hands?” You couldn’t do that in Tennessee, where I’m from. When I first came out, I was 17 years old and I snuck into the gay bar in my little hometown of Chattanooga. You went down an alley, and there was a little door that led in. It was almost like Prohibition days. But there was this amazing cross-section of humanity under one roof. There would be lawyers, black people, gay people, drag queens—we even had one leather queen! We called him Marvin the Marvelous Masochist. And we were all under that roof only because we had one thing in common. There’s a wonderful Pink Floyd song called “Us and Them,” and we would play that on the jukebox. There was this real sense of camaraderie. And maybe that’s kind of what the Gay Pride is, that we all get together for one day and celebrate the fact that, here we are, a big group of people, and what we have in common is that we are attracted to people of our own gender.

NEW TIMES How have you changed since the early days of your career?

JORDAN I changed when I got sober. Fifteen years ago I got three DUIs in a year. I was sentenced to 120 days in jail. And I got out because of Robert Downey, Jr.! They didn’t know where to put him, and I am eternally grateful.

NEW TIMES You met him later, I recall, on the set of Ally McBeal.

JORDAN The first thing out of his mouth, in front of everybody, was, “Do I know you? Have we met?” Like I’m gonna say, “Yeah, in jail!” He said, “Did we use to use drugs together?” I’m like, “No!” He’s completely clean and sober now. I remember at one point he was hiding out at the Van Ness House, which is a gay recovery center. He’s not gay, but he thought that would be somewhere no one would expect him to be. A helicopter would come land in the parking lot and pick him up, because he was making a movie up at Big Bear Lake. I remember thinking to myself, that’s not the way you get sober. You have to bottom out.

NEW TIMES What was that moment like for you?

JORDAN Mine was when they put me in jail. I wasn’t raised like that. And jail is like the playground, and the bullies rule. You have no idea how humiliating it can be. I was 42 years old, and being bullied?

NEW TIMES Were you able to use humor to defuse those situations?

JORDAN That’s the only thing that kept me sane. I did a movie years ago with George Lopez, called Ski Patrol, so the Mexican boys in jail knew me from the movie, so they adored me and they kind of watched out for me. I was like their bitch. But that’s what saved me.

NEW TIMES Has becoming sober affected your identity as a gay man?

JORDAN I grew up in a very, very devout religious environment. I was so ashamed of myself. I was so scared that I was going to die and go to hell. And you know, you work through all that in your adulthood. You say, wait a minute. This doesn’t make a lot of sense, this religion I was raised in. Then all of a sudden, you’re 42 years old, and you’re thrown back into this really horrible environment where you have to kind of go back into the closet. But that’s what it took for me. My life in the last 15 years—the interesting thing that happened—I’ve been drinking and partying through the ’70s, the ’80s, the ’90s, and you took away all my alcohol, and I was riddled—riddled—with internal homophobia. And that’s why I do so many gay pride events, and work with so many gay people that are in recovery: All of that sort of self-hatred and shame had just sort of been suppressed over the years with drugs and alcohol. What’s really amazing is the spiritual journey that I’ve taken, because that’s one of the tenets of sobriety. We really do believe that you can only get sober by believing in something bigger than yourself; a god of one’s own understanding.

NEW TIMES Knowing that you were raised in a Southern Baptist family, and seeing how that has affected you, I would think that you wouldn’t have any religion left at all.

JORDAN I constantly tell people I’m spiritually damaged, you know? To tell a little boy that because you are the way you are, you’re going to burn in hell? I really believed in the lake of fire, as a child. When I got sober, I heard a guy in my meeting say, “I believe that all religions are man-made.” And I thought lightning was going to strike the building! I’d been raised to believe the Bible was written by God. That’s where the journey began. I let that seep into my consciousness, and that became the cornerstone of my belief. Now, I’m probably a closet atheist, and have been for my entire life. But I can’t come out of the closet as an atheist, because the bottom line is, nobody knows if there’s a god or not. Nobody. Not Oprah. Not the Pope. My mother got upset with me because I wrote a book about all of this, called My Trip Down the Pink Carpet. My mother said, “You don’t believe in Hell?” I said, “No. Not one iota.” She said, “Do you believe in Heaven?” I said, “Mama, I don’t know. I don’t care!” And she started crying. My dad died in a plane crash when I was 11. She said, “Leslie, if I didn’t think that we were all going to be reunited in Heaven, I don’t think I could go on.” So I thought to myself, just be a good son. I said “Mama, I do. I do think that we will all be reunited.” That’s what she needs to believe. I’m really interested to see where religion is going to head with your generation. You think, if there were no religion, there would be no morals. But that’s not true.

NEW TIMES I do think that religion is something that we create with the internal moral obligations that we feel. I’m an atheist, but I don’t see myself as amoral.

JORDAN Right! Oh, I’m in the closet, but I’m right behind you! Maybe some day I’ll come out.

Arts Editor Anna Weltner has an accent but doesn’t know it. Contact her at aweltner@newtimesslo.com.