When it comes to Americana songwriting, I'd rate Todd Snider right up there with the best of them—Robert Earl Keen, John Prine, Townes Van Zandt, Lucinda Williams, and Steve Earle. His songs can be funny, poignant, and biting—sometimes all in the same song! He's also an amazing storyteller and hilarious sociopolitical commentator. 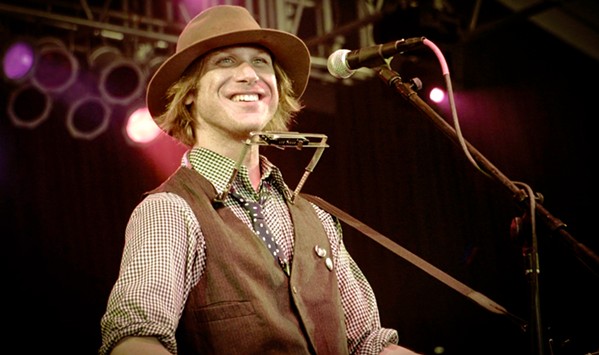 The search for beer by underage partiers has become an anthem, but it barely scratches the surface of Snider's depth of talent and wide-ranging subject matter.

"Just in Case," for instance, is a satirical look at prenuptial agreements: "Well you know I can't love you enough/ But I also can't afford to lose half of my stuff/ There's no doubt in my mind these ties that we're about to bind will hold us both together anytime it gets too tough/ But just in case, just in case/ This morning I went by my lawyer's place/ I didn't think you would mind, here dumplin', sign this dotted line/ What's yours is yours and what is mine will always be mine."

In "Can't Complain," Snider sings from the point of view of a worrywart whose girlfriend is fed up with his griping: "I was talking with my girlfriend, told her I was stressed/ I said, 'I'm going off the deep end,' she said 'God, for once give it a rest!/ We're all waiting in the dugout, thinking we should pitch. How you gonna throw a shutout if all you do is bitch?'"

Todd Snider plays a Numbskull and Good Medicine Presents show at Tooth & Nail Winery next Thursday, Sept. 13 (6 p.m.; all ages; $25 presale at Boo Boo's and ticketfly.com or $30 at the door).

He spoke to New Times via phone from his home in Nashville, where he talked really fast about jam band side project Hard Working Americans, his most recent album Eastside Bulldogs, his style of songwriting, drugs, life on the road, and his 2014 book I Never Met a Story I Didn't Like: Mostly True Tall Tales.

"Buzz blames his minimal success as a musician directly on Snider, who he accuses of stealing his look (Snider's reasoning for why the two are identical) and keeping folk music popular in East Nashville (the reason their sounds are so different). The album's 10 tracks create a world around this wannabe rock star's blind East Nashville pride," according to Snider's website.

"Those are freestyle songs," Snider explained. "People like it, but I'm technically dumping the vaults. That record is 7 years old [though it wasn't released until 2016]. I make a lot of albums that I don't release."

The album is a lot more rocking than his dude-with-a-guitar solo stuff, and it's foot-stomping fun rock 'n' roll.

"I think my lead guitar playing is funnier than my lyrics," Snider quipped, even though he's a great guitar player. "I play guitar like a good 20-year-old, except I'm 51."

Where do his ideas and lyrics come from?

"I got some advice from [Texas songwriter] Kent Finlay [1938-2015], who told me, 'Open your heart and show people inside.' It's what I was telling my nephew the other day, but there's also crafty stuff, which I like to study the same way some people like to study fine wine. I'll drink any wine. If it gets me fucked up, it's good wine. A songwriter should learn all the rules and the tricks and break them. Randy Newman, John Prine, Jerry Jeff Walker—there're so many who understand this. I just try to let it come out, the humor, sadness, anger—if it wants to come out I let it," he said.

Talking to Snider leads to a lot of tangents, or what he calls "stoner moments," but he's easy to get back on track. How does he describe his sound?

"Um, Alice's Restaurant [Arlo Guthrie's 1967 theme album]? I'm a person who sings songs about stuff that really happens," he said. "I'm a non-professional singer-songwriter, meaning I don't punch out at 5 p.m. It's a calling, a vocation like Will Rogers or Mark Twain. I think of you and me as similar hustlers. I write music, you write about music—neither of us has a regular job. Mark Twain was a journalist but he didn't have a regular job. Ramblin' Jack Elliott didn't have a regular job."

I don't have the heart to tell him I do have a regular job at Cal Poly; we're bros now!

Snider's current tour is just him and his guitar. As much as I dig his full band stuff, I think that's where he shines brightest. Does he get lonely out on the road?

"I have a tour manager, and if the tour is close enough [to home] I take the bus and bring the dog. He sits right up on stage with me," he said. "I used to go explore the towns and try to find drugs—which is pretty common on tours—but these days I really only smoke weed. I'm too old to do anything else, though I will take shrooms if someone gives them to me."

I warn him that if I write that people will be shoving shrooms in his hand at the show.

"That's OK, shrooms are easy to travel with. I'll stock up," Snider said. "You'd think I'd meet more people on the road, meet girls, but I don't meet as many people as you'd think. When I tour with the Hard Working Americans, that's an out-of-control party the entire tour, but solo, I might go into town and look for a record store."

What about his book, which, along with Eastside Bulldogs, he calls one of the favorite things he's done?

"I made a book because of all the talking I do on stage," he said. "I was at a show in New York and a publisher in the audience asked me if I would write a book about my time on the road, and I basically rambled it out to a friend who wrote it all down."

It's raw, candid, and hilarious, just like Snider's live shows. He started performing in 1994 in Portland, but over the past 24 years—basically an endless tour—he's set up home base in Austin, then Memphis, and now Nashville. He's got a lot of shows and a lot of albums—more than a dozen—under his belt. Does he ever get tired of playing songs, for instance his super popular "Beer Run"?

"No, I pretty much like 'em all," he said. "I've been lucky with that. If I don't feel like doing a song, I don't. Every once in a while someone will come up after a show and say, 'You didn't do "Beer Run," idiot,' and I'll say, 'Well, go get me a guitar and I'll do it now.' I've put hundreds of songs on records, but I probably only have about 40 I really love. I think to myself, if this song isn't ready for me to play for Guy Clark, it's probably not ready to play during a show. Overall, though, I'm grateful to do what I do."

Numbskull and Good Medicine also present epic R&B party band The California Honeydrops at Presqu'ile Winery on Friday, Sept. 7 (5:30 p.m.; all ages; $25 presale at ticketfly.com or $30 at the door).

Dig some punk-tinged folk rock when The Sam Chase and the Untraditional plays Wednesday, Sept. 12, at The Siren (7 p.m.; 21-and-older; $10 presale at Boo Boo's and ticketfly.com or $12 at the door).

The BIG news is the opening of the new SLO Brew Rock Event Center this Thursday, Sept. 6, with reggae superstar Collie Buddz (8 p.m.; 18-and-older; $25 at ticketweb.com or $30 at the door). He's touring in support of Good Life, his first full-length album in 10 years.

Celebrating all things hairband '80s, Steel Panther plays the Fremont Theater on Saturday, Sept. 8 (9 p.m.; all ages; $27 at Boo Boo's and eventbrite.com). Expect their original songs, the biggest metal hits from the '80s, and their trademark comedic delivery.