Native, a sophisticated, edgy lounge and restaurant in San Luis Obispo, isn't for everyone. That's why it's being talked about all over the county, and deservedly so--this unique gathering spot offers modern, comfortable couches, an ultra-cool scene, and an extraordinary menu by the talented chef Charles Aghajanian. Despite the lack of signage out front and what appears to be an abandoned patio across from the Mission San Luis Obispo de Tolosa, Native is a smashing success and the hottest spot in town.

During my first visit with my husband Dan, we agreed that Native reminded us of Las Vegas with its modern layout and colorful lighting system--not to mention a V.I.P. room with special host Joy Honey, a huge plasma screen TV, white couches, and tranquil blue walls. But take my word for it: I think Native is better than any wine bar I've experienced in Vegas or San Francisco. Aghajanian's soulful dishes take it over the top. 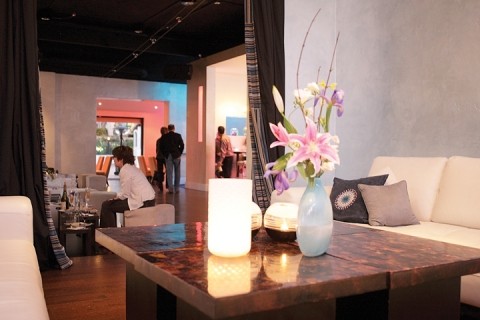 # The abalone calamari duo with Meyer lemon gastrique and Meyer lemon vinaigrette on a tumble of micro greens was our favorite dish. The sauteed abalone, so often obliterated by lesser cooks, was delightfully tender and succulent with the delicately crisped calamari, a perfect contrast. Don't forget to dip the fish in the addictive gastrique sauce on the plate--it's not there just to look pretty. We ordered that night's special, crab cakes, and praised them for not being overloaded with gummy binders or veggies. The tempura shrimp with Chinese long beans was also tasty although neither of the last two dishes were quite as intriguing as the abalone calamari duo.

We arrived early on Saturday when it was still quiet and sat at one of the tall bistro tables with stools in the bar area. Our server was personable and informative, but in hindsight I realize I just didn't get the concept of what Native was all about, considering the circumstances. My next experience there with friends would be a complete turnaround, however.

Native, formerly the Mission Grill, has been owned and managed by Sean Faries and family since 1999. The savvy restaurateur decided it was time to gut the old-style restaurant and create an upscale environment typically found in L.A. or Las Vegas. I met with Faries and Aghajanian after several visits to get the details about Native.

"I've kind of been on Cloud 9. I never expected this to be so well received so fast," Faries admitted. "This is a passion-driven profession, but we're trying not to get too far ahead of ourselves." 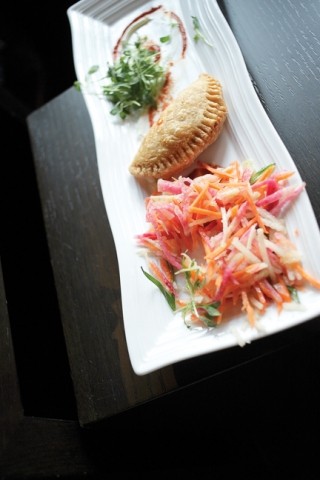 # He noted that it's been rewarding to see people experience dining in a style they've never tried until now. The bar and nightclub atmosphere is nothing like the bar scene some people might imagine.

"Native wasn't designed for the college demographic," Faries pointed out.

"Older men are the ones most often troubled by the concept," he explained, admitting that many new patrons are surprised at finding there aren't any dining room tables. Some of them tell him that SLO can't handle a restaurant like this, but Faries asks: "Why can't we have wine that's better than Napa's? Why can't we have a place that's edgy?"

Native is sharply defined all right, and Faries was involved in every aspect of its creation and construction. The passionate owner happily admitted: "I built the bar myself."

A giant, glassed-in waterfall divides the entry from the bar. Everything about Native is very personal to Faries who's usually there daily, but he leaves the cuisine up to the expert: Aghajanian whom it seems was born to be a chef. Formerly sous chef at Lido under the notable chef Evan Treadwell, Aghajanian left just less than a year ago to join Faries in making Native the distinctive lounge and restaurant that it is. 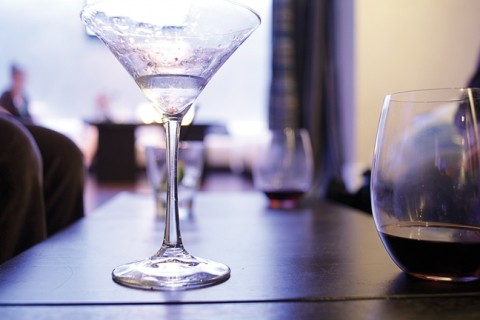 # "This place was designed to be cutting edge and innovative," Aghajanian said, "and this menu epitomizes that theory."

The chef, a graduate of the Culinary Institute of America in New York, has worked in many notable restaurants in New York City, L.A., and in Florida. While working at the Four Seasons Santa Barbara, he took on a second job in a sushi bar to better understand Japanese cuisine and its artful presentation.

Aghajanian's unique menu is divided into sections titled earth, wind, fire, and water. He also makes all of the decadent desserts. There's a happy hour menu available Monday through Friday from 5 to 7 p.m. that's quite reasonably priced. That was the draw when I returned four days later with two friends--wine broker Laura Ward and winemaker Lane Tanner--when the experience was a prime example of what this unique nightclub is all about.

We arrived early and happily discovered that Wednesday is also winemaker's night. We found Edgar Torres, assistant winemaker at Hug Cellars, pouring their fabulous wines paired with a cheese and fruit plate. We thought ourselves off to a great start. We ordered an array of appetizers from the happy hour menu and loved them all. Relaxing on the couch as we sipped fabulous Pinots, noshed on Aghajanian's Armenian touch--an appetizer of baba ghanoush, tatziki, marinated feta, and grilled pita triangles--we talked and laughed for the three hours we stayed there. I felt like a spoiled cat snuggling on a cashmere sofa.

When the server approached with the Parmesan fries, Lane immediately inquired, "What's that smell?" Their perfect, crispy fries are anointed with white truffle oil and they're irresistible. Before we finished them, Lane insisted, "Take those fries away. I don't even like fries but I can't stop eating those damn things."

We wanted to try every one of Aghajanian's worldly dishes and we loved everything we tried: the delightful white peach granita topped with Domaine Chandon sparkling wine baby greens bouquet with purple potatoes, caramelized persimmon, and Medjool dates and the fork-tender ostrich osso buco with Parmigiano whipped potatoes, crispy parsnip, and hibiscus carrot jus.

Among our favorites: the spicy ahi tartare tacos with avocado tempura, Napa cabbage slaw, and ponzu sauce the mole duck empanadas with a delicate, flaky crust enveloping a luscious duck confit with queso fresco and a side of jicama, carrot, and radish slaw and the wonderful abalone calamari duo.

After the decadent feast, Aghajanian told us that he doesn't offer nightly specials: "I shop at the farmer's market and the docks to find the freshest ingredients, and usually find something I've got to put on the menu. I look at the menu as my specials board."

We all agreed it was way too much fun as we regretfully arose to leave.

"Native isn't a restaurant and lounge for everybody," Faries admitted. "In Japan and the Mid-East they don't sit at normal tables. This is an environment meant to be enjoyed with friends."