Creation, reincarnation, and twin flames are all the makings of a great exploration of religion, life, and true love—or a children's book, if you think like San Luis Obispo-based Rebecca Velasquez and her 8-year-old son, Wesley, who co-produced a story on these very topics that came out in May. Rebecca and Wesley sat down with New Times to talk about their first book, Sol Finds Love: A Sacred Love Story for Children, a picture book that explores ideas such as friendship, deep emotional connections, nature, being truthful, finding one's own truth, and overcoming loss. 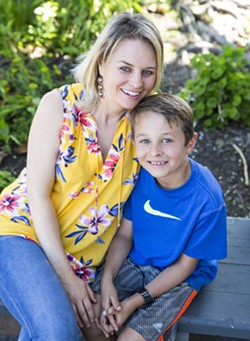 New Times: What was the process of writing a book together like?

Rebecca Velasquez: Sol Finds Love is actually part of a series. I basically started writing the third book, Sunshine and His Sack of Snakes, after doing a self-expression and leadership course, and I was just really inspired. I had never done any writing at all, but I had the inspiration at like 3 in the morning. I had some character in mind and started writing, and I decided to take characters from that story, Sol and Moon, and I backtracked and told their story, and that's how Sol Finds Love came about. We wrote the story right before we moved to California. I had lived in Connecticut for my entire life apart from college so it was just a time of questioning everything, and learning to align with my own soul. The character of Sol is really on a journey of aligning with her soul, speaking her truth in the face of fear, and that really mirrored my process, and our family's process, of questioning where do we want to live, and re-evaluating and re-assessing soul connections in my own life, and leaving a place I had lived my entire life. Wesley said, "I want to be in the newspaper," right when we started writing, and I said "OK, great." I had read so many stories to him growing up, and I thought it would be awesome for him to go through the process, to see how a book is actually written, illustrated, and published. So his involvement was that I would read him both the stories, and he did more critiquing around illustrations with the professional illustrator, Mark Allen of Creative Anomaly. In one, when Sol was crying, there was a puddle of tears and he said, "Mom, that looks like pee so I don't want to have a puddle of tears." So we took that out.

NT: Wesley, what was the process of working on the book with your mom like?

Wesley Velasquez: It was fun, and so exciting. I was like, "Oh my gosh! We're doing a book!" I don't even remember when this started.

NT: How did you come up with the story? Was there a specific creation story you were basing it off of?

RV: There are just a lot of themes in the story, a soul connection is a huge one. It was a period of time for me of reassessing soul connections, aligning with my own soul, and speaking my truth just in life. The topic of twin flames is also a topic in the book, and that's a really rare phenomenon that I really wanted to bring to light. A lot of people don't understand that connection, there's a really small population who have experienced it, and so it brings that topic to light.

NT: The book is almost a higher reading level. Was that hard for Wesley to navigate or did he completely understand everything? 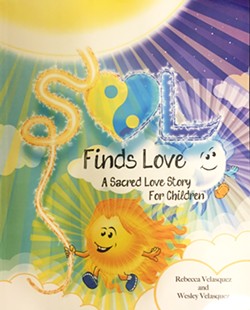 RV: I've really found that people Wesley's age do get it, and what they get from it might be different than what an adult gets from it. Children his age read it and understand that there are some sad parts, and there are reflection questions in the back so they get that opportunity to go reflect on the story, and see that in the story, this character experienced a loss, but a good thing came out of it. They learned to turn to a higher power and learned to find love in their own heart.

NT: What does the idea of twin flames mean to you?

RV: I think as time goes on in our society, people will start to hear those words more and more often, and it's also known as twin souls. There's a lot on the internet if people Google "twin flames," and a lot of people confuse twin flames with soulmates. There are soulmates, twin flames, and kindred spirits, and I put in the book a description of what those characteristics are, and it's the sort of connection, where for a lot of people it can happen and they won't know what it is. It's an experience that lives outside of any other human experience, People may not have a name for it, and hopefully this book can bring an understanding of that, and what it is, for people who experience it now or in the future. It's just to engage people about the idea. Δ