Morgan Monroe and her band The Monroe deliver soulful sounds! 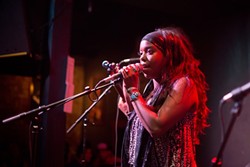 The Monroe seems to have come out of nowhere, but now seems destined for greatness. I’d been hearing rumors of a powerful vocalist and a group of talented young musicians playing small gigs here and there and wowing audiences, but these rumors did little to prepare me for just how powerful this ensemble is.

The heart and soul of the group is Morgan Monroe, a 24-year-old who grew up singing in a Baptist church.

“My first lady was my first instructor, so I’d go to her house once a week and work up music for the service,” Morgan said.

For the record, a “first lady” is the pastor’s wife. If you didn’t know that, you aren’t alone.

This was down in Riverside County, where Morgan’s dad Donnie Monroe worked in the aerospace industry. The Monroes ended up in Atascadero when Donnie decided he’d had enough of the industry and moved his family to A-Town, where they’d camped and jet-skied on vacation. That was about 10 years ago, and now the family owns Hush Harbor Artisan Bakery & Café on El Camino Real, a popular place for lunch and Saturday breakfast that bakes bread daily.

Morgan attended junior high and high school in Atascadero, but didn’t do a lot of performing.

“I sang a song for History Day once, and I did a Bryan Ferry song for a talent show,” she said.

Then, at 18, Morgan had a daughter, Chloe—the light of her life.

“To be honest, when I got pregnant, I never saw myself singing again,” Morgan revealed, but when Chloe started school, she saw her chance. Plus, Chloe loves her mom “the singer.”

While the band does a few select covers such as Amy Winehouse’s “Back to Black” and Louie Armstrong’s “St. James Infirmary,” most of their material is written by keyboardist and horn player Robert “Isapony” Vesnaver and Morgan, who writes most of the lyrics.

“I’ve never been around people who could create music like this,” said Morgan, who says she draws inspiration for her lyrics through her life and her friends’ lives, and tries to create songs that “are relevant to all our lives.”

Where does she see The Monroe going?

“You know, I really feel like The Monroe could be huge,” she said. “It’s impossible to tell where it might go, but I think the music is too good. I think people will love it. The world just needs to hear it and it will be accepted.”

And how did it feel to win best R&B song and best live performance at the recent New Times Music Awards? Did she think she had a shot going into the competition?

“People like what they like, so I didn’t know. I read the other performers’ bios, and I thought about how some performers can sound better live than on their recordings or better on recording than live,” she admitted. “Some of the performers were more classically trained, professional kinds of musicians, and we’re more vibe players, so I wasn’t sure, but the reaction of the crowd made me think we had a chance.”

And when she found out they won?

“It made me feel like, oh my God, we’ve gotten recognition for this work! It was a boost of energy, and I was so excited, I thought, ‘We might actually do this!’”

And her parents, in whose restaurant she works, were they pleased?

“My mom called and told everyone we know. I can be late to work for the next two weeks and they won’t be mad! It made my whole family proud.”

Do yourself a favor and catch this rising group of young stars in the making. The Monroe has really got something special going. They play Luna Red on Thursday, Sept. 5, from 10 p.m. to midnight; hit The Artery in Atascadero on Saturday, Sept. 13, at 5:30 p.m.; and play at Sweet Springs Saloon starting at 9:30 p.m. on Saturday, Sept. 14.

Their most recent release, a 45rpm single printed on money-green vinyl, features "Greedy," an incisive, biting song that exposes the hypocrisy of the soulless, money-grubbing rich. Meanwhile, the B-side, "That's All I Got," offers the panacea to "Greedy": love over money!

Castro's been at this a long time, having picked up the guitar at age 10. Born in San Jose in 1955, he spent much of the '70s playing in Bay Area cover bands. Later he joined The Dynatones, but his real success came as a bandleader of his own soul-drenched R&B and blues outfits.

In the mid-'90s, he did three seasons as house band for Comedy Showcase, which aired after Saturday Night Live. In 2001 and '02, B.B. King asked Castro to open his summer concert tours.

He's had an avalanche of blues awards heaped on him over the years, and deservedly so. His current band is slicker than a '70s pimp in an oil spill. He's got James Pace delivering up the groove grease on keys, Randy McDonald thumping away on bass, and David Tucker keeping the band's heartbeat on drums. This promises to be a great live show.

Has there ever been a singer-songwriter so lavished with critical praise but so bereft of commercial success as John Hiatt? His small base of loyal fans loves him, other artists love to cover his material (Three Dog Night, Bob Dylan, The Searchers, Willy DeVille, Ry Cooder, Linda Ronstadt, Bonnie Raitt, Eric Clapton, B.B. King, Joe Bonamassa, Willie Nelson, Joan Baez, Paula Abdul, Buddy Guy, the Desert Rose Band, Jimmy Buffett, Mandy Moore, Iggy Pop, Emmylou Harris, Rodney Crowell, Nick Lowe ... I could go on, but you get the idea), but his albums sell poorly and the superstardom he clearly deserves has continued to elude him.

No fair! Hiatt is simply an amazing songwriter and a warm, charming performer. Well, for his fans out there, and for the uninitiated who may want to open your eyes to this incredible talent, here he comes this Saturday, Sept. 7, at the Clark Center (8 p.m.; all ages; $38 to $58; online or by calling 489-9444).

Hiatt first found his way to local audiences when he played the Fremont Theater in 1994 as a radio show for KOTR, the station bought by KPIG. Later he played some "Songwriters" shows with Lyle Lovett, John Hiatt, Guy Clark, and Joe Ely. Now he'll perform as John Hiatt & The Combo, touring in support of his 21st studio album, Mystic Pinball.

Come find out what his fans know: John Hiatt is one of the best songwriters in he world!

Can you believe Ted Waterhouse is turning 60? Me neither! He looks like a GQ model, is kind to small animals, and plays music with the kind of heart and soul usually reserved for people who choke on their own vomit and die at 27. To celebrate his long and storied musical career, a whole bunch of members of the "I Love Ted Waterhouse" fan club will congregate at The Shell Café on Thursday, Sept. 5, for the third annual "TedFest!" (6:30 p.m.; all ages; free). Bob & Wendy, Dulcie Taylor, Randall Lamb, Cheri Mason, Steve Key, Dorian Michael, Valerie Johnson & Al B Blue, Kristen Black, Dan Wolf, and Holly Ann Phillips will be covering many of Ted's original songs. And why not? He plays with everyone from The BlueSouls to The Viper Six and the Swingin' Doors. In 2010, his song "Fire Season" won best song in the New Times Music Awards. Happy 60th, buddy!

If you like classical guitar, you'll find a lot to like when the 2013 La Guitarra California Festival comes to the Performing Arts Center on the Cal Poly campus Friday, Sept. 6, through Sunday, Sept. 8. This year's performers include the Los Angeles Guitar Quartet, Andrew York, Berta Rojas, Martha Masters, Carlos Pérez, the Brasil Guitar Duo, Jason Vieaux, Thibault Cauvin, Grisha Goryachev, Jérôme Mouffe, and Dr. Craig Russell. Visit laguitarracalifornia.com for a complete schedule of events and tickets, or call 756-4849 to buy tickets over the phone.

Cajun trio Jesse Lége and Joel Savoy with Kelli Jones-Savoy plays the Red Barn this Saturday, Sept. 7 (potluck at 5 p.m.; concert at 6; all ages; BYOB; $10 at the door). "This is our first hard-core Cajun band from the source!" gushed concert organizer Stuart Mason. Lége grew up in a rural, pre-electricity home in Gueydan, Louisiana, where he spoke Cajun French and learned music from relatives, neighbors, and the family's much-loved battery-powered radio. The son of Cajun music royalty Marc and Ann, Joel Savoy grew up in the middle of a renaissance for the Cajun culture of southwest Louisiana. According to Linda Ronstadt, "Joel Savoy is one of my favorite musicians on just about any instrument, but on guitar and Cajun fiddle he is truly outstanding." Born and raised in the Piedmont of North Carolina, Kelli Jones-Savoy is a powerful force in the progressive music scene of Southwest Louisiana where she now lives, shining as a songwriter in Feufollet, and playing fiddle and singing in French in her all-girl Cajun trio Les Bassettes. This ought to be quite a show!