New Times goes behind the scenes of a fast paced, and eccentric, artist collective 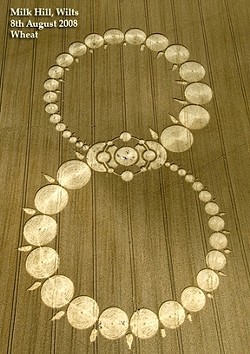 For the uninitiated, Pecha Kucha requires some explanation. In preparation for SLO’s seventh installment of the event on March 14, New Times discussed the purpose and history of Pecha Kucha with musician Bob Liepman of Bob and Wendy, crop-circle enthusiasts Susan and Jack Biesek, and event organizers Catherine Trujillo, Enrica Lovaglio, and Tom DiSanto.

Art is no longer limited to dripping house paint on seven-by-nine-foot canvases. It’s not brush strokes or turpentine or genres.

Art is forward thinking, wired, and never what you expect.

Pecha Kucha is an extension of this new approach to art. It might draw upon the old forms of inspiration, but isn’t oil slicked, and its unabashed style is linked to another Asian phenomenon.

“It’s cultural karaoke,” said organizer DiSanto. “Pecha Kucha started in Tokyo and was so successful and popular that it spread like wildfire. SLO became the eighty-first city to be added to the roster, the smallest venue in the world.”

Done at least four times a year, Pecha Kucha means “the sound of conversation” or “chatter” and was first developed by Klein Dytham Architecture in Japan.

Lovaglio explained it simply, “It is in the name of the event: chit chatting. Talking about art, about sustainability, anything that is stimulating and makes us think ... I love the connections that are made, the collaborations. After the show, there is always a lot of mingling and discussion.”

That’s the point. Artists are encouraged to stop, think, talk, and stay long after the individual slide shows have ended.

That is how Susan and Jack Biesek got hooked. Graphic designers by day, crop-circle fanatics by night, the Bieseks’ clients include the Getty Villa and UCLA.

They stayed for hours at the last Pecha Kucha volume and knew they wanted to present something next time around.

Jack can’t wait to present. “There’s no time to get bored. It is very entertaining. The people that come out of the woodwork … it’s fascinating.”

Susan explained how crop circles became the topic of their conversation: “We both came last time and are excited about the upcoming event and we love crop circles—it is an incredible phenomenon. As graphic designers we were very inspired by the work. It was beyond what most designers could accomplish.”

Jack expanded, “Crop circles are the modern-day mystery. They are poignant and compelling and you have to go and find your own interpretation.”

The Bieseks did just that when they traveled to England in 2007 where, they claim, the most beautiful circles are located.

“The landscape in southwest England produces the most fabulous crop circles. They appear every year during the growing season, April to August,” said Susan.

What the Bieseks don’t have a simple answer for is who creates the crop circles. That doesn’t stop them from wanting to spread the crop circle word. It isn’t so much about figuring out a mystery as exposing the world to their beauty.

“This is the new way to share your work and passion,” explained Trujillo. “This event brings an opportunity for different designers or artists, or people who are passionate about a certain subject, a format and forum.

“There are so many different people organizing Pecha Kucha so we all have a different perspective of who to invite or who to seek out. You wind up with this eclectic mix of people who might not otherwise get a chance to share their passion.”

DiSanto added, “We specifically try to spread it out: a painter, an architect, a photographer, a musician. We don’t want the same discipline all at once.”

Was Pecha Kucha’s goal realized? Did they get the super-charged chatter they were hoping for? “Yes, definitely,” said DiSanto.

The 40-minute-long event gives this particular volume’s seven contributing artists six minutes and forty seconds each to wow audiences, or just wow themselves.

Liepman, a musician for more than 50 years, probably falls into the latter category. Liepman, of the local Bob and Wendy music duo, will be performing, but that’s not all.

Liepman will present images from his life, beginning with his youth—him at 11, playing his signature instrument, the cello, up to the present day.

“It’s fascinating, it’s unique—20 slides, 20 seconds each. And you accompany that visual any way you want to,” Liepman beamed as he described what he and Wendy have in store for SLO on March 14.

“We will perform two of Wendy’s brand new songs during the slide show.”

This stays within the philosophy of Pecha Kucha: performing or playing music sets off the conversation, according to Trujillo.

The Bieseks will present mostly images of the crop circles.

“The images tell the story. We’ll also talk about theories, their meanings and how no one knows how they are done. They are done at night during only a few hours of darkness leaving no footprints on the fields.”

The crops are laid down, naturally folded, or woven, the stalks heated but not killed. Crop circles inexplicably reach lengths of 1000 feet, all while containing intricate drawings.

Jack elaborates, “You don’t have to interpret it. The images themselves open your mind to what is going on.”

The crop circles’ language consumes Jack. “It is a visual language that fascinates me. The icons, the message, the intent. This is pure art, on a huge scale.”

As for Pecha Kucha?

“It encourages people to think laterally,” he concluded.

Whether you’re a fan of African drumming, an autobiographical musician, or terrified of, yet fascinated by, crop circles, presenters and onlookers alike will learn about different aspects of the community—the diversity that defines SLO.

Trujillo affirmed, “It’s joyful and unexpectedly exciting, an energy you can’t describe. All of Steynberg is electric.”

Yes, it’s true, Christy Heron and a Range Rover are responsible for the crop circles. Make her eat wheat at cheron@newtimesslo.com.