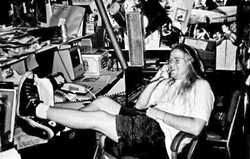 Elvis Costello’s song “Radio, Radio” didn’t see a lot of radio play when it came out in 1978 … or ever. It was, after all, an indictment of commercial radio’s wrong direction: “Radio is a sound salvation. Radio is cleaning up the nation. They say you better listen to the voice of reason. But they don’t give you any choice ’cause they think it’s treason. So, you had better do as you are told. You better listen to the radio.”

Costello must have been some kind of Cassandra. Looking at the state of commercial radio these days—with pre-recorded DJs pushing computer keys to queue-up a limited number of “hits” pre-selected by a committee—Costello would be rolling in his grave if he were dead. When he sang radio was a “sound salvation,” it was clearly satirical, but the kind of radio Costello lamented the loss of is alive and well on KCBX’s Morning Cup, hosted by Neal Losey.

Losey, 47, is celebrating his 25th year in radio, having first started as a Cal Poly history student in spring of 1989 on Cal Poly’s KCPR. He continued to DJ on the college station until 1996, but, meanwhile, he also started doing the soul show Night Train on KCBX in 1993 while he also did commercial radio on KOTR, K-BEAR, and The BEACH.

In addition, he’s worked at Boo Boo Records since 1990, less for the money, and more for continual access to all the new music that comes out. He has, quite literally, immersed himself in music for his entire adult life.

What he’s doing weekday mornings on the Morning Cup is nothing short of an act of revolution in radio world. He mixes genres, plays whatever he thinks is good, takes requests, and, if you call the station, he’s there in person, doing his show live. Needles drop on vinyl records, he talks about local concerts and performers, and he frequently explains the music he plays, giving background, history, and the sort of info music lovers can’t get enough of. There’s no other show like it.

“I never thought about it too much, but it’s true,” Losey said. “Yes, I do get the freedom to do the show like this, every morning in prime time, live. That probably doesn’t exist anywhere in the world, and I’m glad I get the opportunity. I’m sure there’s a reason people don’t do it this way, but I’ll take the chance and hope people will dig it.”

Losey took over the show in 1997 when it was called Morning Cup of Jazz, and all it played was jazz. Two years ago, Losey started loosening up the format, especially on Tuesday mornings, when he calls the show Morning Cup Runs Amok. In all honesty, some long-time listeners weren’t happy with the changes. 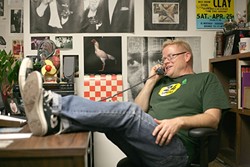 “During pledge drive, we had people say, ‘I only listened to Morning Cup, but since it doesn’t play jazz any more, I won’t pledge,’” Losey admitted. “But I do hear from people that like it, mostly through secondhand accounts but also from calls, emails, and pledge forms. And some people only listen on Tuesday because they don’t realize there’s variety the other days as well. I’m going to keep playing jazz, but it’s going to be—hopefully—only the best mixed in with the best examples of other types of music, too.”

The thing about Losey is, he never stops exploring new—and old—music. He digs  out forgotten tracks, or artists who have  gone out of fashion, and mixes them with  brand new music.

“Music I love doesn’t get replaced,” Losey revealed. “I listen to tons of new stuff, in all styles. I still love Fishbone, and I’d go see them tomorrow if they come to SLO Brew. I still love Judas Priest, and Iron Maiden, and Motorhead from my junior high days. I went to see Priest at the fair a few years ago. I still love Bob Wills from listening with my Grammie. I went to see Morris Day and the Time at the fair because I still love them. I went to see Snoop Dogg at SLO Brew, and it was thrilling to me. And today, I’m excited about First Aid Kit, and Luluc, and Sharon Jones, and Arcade Fire. From working at Boo Boo’s for so many years, I sort of learned that you can find good songs in almost every style of music, even if it’s a style you don’t like all the time. There’s good music everywhere, and from all time periods.”

Shows like the Morning Cup—playing jazz, soul, Americana, and more—are rare indeed, and it wouldn’t be possible without someone like Losey who’s made local live radio his raison d’être.

“I just hope people give the show a chance,” Losey said. “Even if they don’t listen to radio anymore, gave up on the show long ago, only listen to Pandora or whatever, I hope they’ll give it a try. I put in work to try to put something together that music fans in their 20s to 80s can enjoy. I just have to believe there’s a place for live, local, music radio, and that it has to be better.”