Sounds for 2016: Ring in the New Year with your kind of music

Tomorrow is Friday, Jan. 1. Wow: 2016. But tonight, Thursday, Dec. 31, is your last chance for kicks in 2015. Kicks, people! How you get those is totally up to you; you can pick anything you want—any kind of music, any kind of food, any kind of booze.

The night is yours. All of it.

And this county’s got choices, baby.

We can start with the most poppin’ choice of all: the SLO Symphony, which will be hosting its New Year’s Eve POPS musical celebration again this year. The Christopher Cohan Performing Arts Center will be primped, preened, glittered, and glossed for the evening’s festivities. You will be serenaded with symphonic gems, jazz standards, movie music, sultry tangos, and more sway-worthy rhythms by composers such as George Gershwin, Duke Ellington, Richard Rogers, and John Williams.

“This musical celebration will inspire and enchant our guests,” said SLO Symphony General Manager Francie Levy in press materials. “Once again, we are pulling out all the stops to make this a New Year’s Eve our audience will never forget!”

This concert will close with the Times Square Ball Drop at 9 p.m., giving the audience plenty of time to move with verve and vigor into the remainder of that dark night to celebrate until the clock strikes 12!

Concert tickets start at just $20 per person and can be purchased on slosymphony.org and pacslo.org or by calling the box office at 756-4TIX.

Unfinished Business presents its eighth annual ’60s Rock ’n’ Roll New Year’s Eve Bash at the South County Regional Center, 800 West Branch St., Arroyo Grande. Dance to the classic rock beats of the Central Coast band that takes you back to a freer time. An Italian buffet dinner by Giuseppe’s Cucina Italiana of Pismo Beach is included with admission. A no-host bar and $10 corkage fee will benefit the Arroyo Grande Knights of Columbus. Doors open at 6 p.m., dinner will be served from 6:30 to 7:30 p.m., and dancing will be from 8 p.m. to just after midnight. Tickets are $80 each, $750 for a table of 10, and available online at NYE2015AG.BrownPaperTickets.com, by phone at 431-3067, or by email at unfinishedbusiness@charter.net.

D’Anbino Cellars starts its New Year’s Eve party with hors d’oeuvres, a spectacular “land and sea” buffet dinner, and dessert prepared by Just Between Friends Catering. The Mooks! Joins the evening with strong vocals and great harmonies. Jack Collins (guitar), Bill Love (drums), and Dale Claiborne (bass) will get your groove going with a mix of classic rock, blues, rockabilly, and funk. Of course, there will be wine, and a champagne toast with cheese course to ring in 2016.

A portion of the proceeds from this event will go to benefit the Mighty Oaks Warrior Program For more information on the program, view their website at mightyoaksprograms.org.

Otter Rock Café on the Embarcadero in Morro Bay rings in the last eve of the year with the dirty soul rock of LA band The Letters Home. Dinner reservations start at 5:30 p.m., and The Letters play from 9 p.m. to 1 a.m. Champagne is served at midnight. All you’ve got to buy is dinner and drinks!

The Back Bay Betty Band will be rockin’ The Siren on Main Street in Morro Bay from 9 p.m. to 1 a.m. with raffle prize give aways to benefit Project Surf Camp, a local nonprofit that helps those with special needs play in the ocean. Admission is free; raffle tickets are $5 each or five for $20.

A folk band out of the Santa Cruz Mountains, The Painted Horses, joins Luna Red in downtown SLO for its Midnight Under the Moon Dinner Celebration! The early seating for dinner ($48) is for all ages with no show, while the late-seated dinner ($68) is for 21 and older with music from 10 p.m. to 12:30 a.m. and a champagne toast. Call 540-5243 to make reservations.

Washington state’s Polly O’Keary and the Rhythm Method take their grimy blues rock to the Frog and Peach starting at 8 p.m. with special guest Terry Lawless. They also play The Pour House in Paso Robles on Friday, Jan. 1, at 8:30 p.m. and Vino Versato in Pismo Beach on Saturday, Jan. 2, at 5 p.m.

Harmonica draped around his neck, a Central Coast crooner whose musical journey started in Ontario, Canada, Billy Manzik, brings his guitar-laden bluesy folk rock with roots—the toe-tapping kind—to the Creeky Tiki on New Year’s Eve, Thursday, Dec. 31, at 10 p.m. Manzik hits up the Libertine Brewing Company in Morro Bay on Saturday, Jan. 2, at 8 p.m.; returns to the Frog and Peach floor on Sunday, Jan. 3, at 10 p.m.; and heads up to the Paso Robles Inn on Tuesday, Jan. 5, at 6 p.m.

Songwriters At Play returns to Studios on the Park for the Art After Dark event on Saturday, Jan. 2, from 6 to 9 p.m. Steve Key will share the stage with guitarist Dorian Michael and vocalist Holly Ann Lewis. Steve, Dorian, and Holly will play together as a trio, and also swap songs in solo performances. The three veteran performers have played many Songwriters At Play events together, and were featured at the 2013 Creekside Folk Festival in Atascadero. 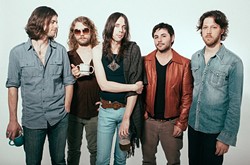 Studios on the Park is a nonprofit open studios art center located at 1130 Pine St. in the heart of historic downtown Paso Robles.

With a little bit of Red Hot Chili Pepper-esque flair, Jake Nielsen’s Triple Threat will blues it up at the Frog and Peach on Tuesday, Jan. 5, at 9 p.m. Nielsen was born with cerebral palsy, limiting the use of his legs, but he still played basketball, baseball, and rode calves at a young age. He picked up a guitar at 15 and formed his first reggae/rock bank at 17. Eventually though, he “felt the calling to play some blues,” according to a bio on the band’s website.

That blues sound Triple Threat brings is skunky and funky, in your face, guaranteed to make you get up and dance!

Lee Gallagher and the Hallelujah will transform downtown SLO’s funky Frog and Peach stage into a “sweaty, hip-shaking, psychedelic tent revival” on Wednesday, Jan. 6, at 9 p.m. The band was named one of the top five up-and-coming Bay Area bands of 2014 by CBS San Francisco and one of five artists you should know about by Relix magazine.

Based out of the city by the Bay, the band’s made up of Midwestern and Southern transplants “with a devotion to honest roots-based American music, they weave a sonic tapestry framed by wailing guitars, churning organ, and more than a slight nod to the Southern gospel music of their past,” according to press materials. Their sound’s been compared to The Band, the Black Crowes, and the Grateful Dead, and they’ve shared the stage with the Heartless Bastards (LOVE them!), Boston, and The Doobie Brothers.