Listen up, event organizers and nonprofits. There’s a new template in town for fundraising affairs, and it goes like this:

First, hold your event at Camp Ocean Pines in Cambria. It’s mega super pretty with giant trees and views of the ocean crashing dramatically into rocky bluffs. It’s literally the best place in the county, bar none. Camp Ocean Pines, got it? Boom. You’re off to a good start already.

Then, charge the people a fair price for tickets, and give them free rein to wolf down as much food as possible from some of the best local eateries. But don’t stop there. Also give your guests the chance to buy a wine-sipping bracelet for just $10. Now pay attention. This next part is key. Make sure that magical bracelet allows them to fill their wine glasses as many damn times as they please.

Throw in some music and art, and you’ve got yourself one hell of a party—but if you want it to be an event that people really remember, something so awesome they’ll be lining up to buy tickets the next time around, do like the Friends of the Elephant Seal did and set out a huge tray of cookies. Good cookies, too. None of that stale, store-bought crap.

I don’t mean to brag, but as a very important journalist and an insightful cultural commentator with a chiseled jaw line, I’ve been to, like, four or five fundraiser-type affairs like the Grand Ole Soupabration (held Sept. 9), but none of those came close to this soup-filled phenomenon of joy. 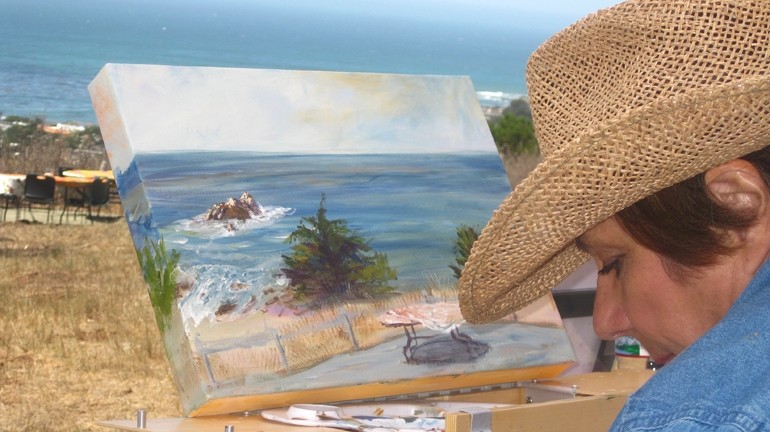 Right as I walked in, organizers handed me a free soda coupon, a raffle ticket, and a ballot to vote for my favorite soup. The ladies were gracious and friendly, and they were giving me free things, making for a great first impression. Then my nostrils were gently caressed by the sweet and hearty aromas of vegetables and seafood, simmering together in pools of lovely flavor. I had to eat them all, so I did, sampling one at a time from little cups. I tasted several twice (I’m kind of a glutton), and nobody had any problems with it. They were like, “Yo Nick, have some more soup,” and I was like, “OK.”

Novo won the taster’s choice award with its Thai shrimp concoction, but my favorite was the squash medley from Linn’s. It was like sipping warm pie filling, but better.

Outside, plein air painters were capturing the scenery in pieces that would later be auctioned off to raise more money for the Friends of the Elephant Seal, who walk the bluffs of San Simeon every day to answer questions from the hundreds of tourists who stop there during their coastal commutes.

With a wife and kid in tow, I was looking to enjoy a family-friendly type day, so I skipped the wine section. Other soup sippers did not, and from afar, it looked like they were making the best of a great situation. Let’s just say they were awfully cheerful in that section of the cabin.

Once we had sipped our fill and chatted with a few friendly soup enthusiasts, the family and I decided to head on up to Piedras Blancas to see the seals. I kind of owed it to the funky animals, considering that they were practically responsible for my soup-induced state of euphoria.

Anyway, that’s how you do an awesome party. Kudos to the Friends of the Elephant Seal, and good luck on the bluffs.

Staff Writer Nick Powell is full of soup. Tell him why at npowell@newtimesslo.com.