When Executive Chef Mateo Rogers handed me a batch of his house-made hot sauce “to go,” I knew I had landed the best souvenir of the summer. The tiny glass bottle—with nothing but an all-caps “Hatch” scrawled on the side—is now the crown jewel of my fridge door; proof of my voyage into a delicious world where whole, organic chickens twirl on old-school rotisseries until they are plump, golden brown, and irresistible.

Have you heard of this new wood-fired wonderland? Where chicken fat is smeared on thick hunks of rustic bread, and creamy grits—laden with sharp cheddar and shrimp—are imported from “a guy who hand-mills it in South Carolina?”

Yes, I am talking about The Hatch Rotisserie & Bar: where Southern comfort meets farm-to-table and every day of the week conjures up a different rotisserie delight (Tuesday is goat; Saturday, leg of lamb; Monday, tri-tip; and so on). Take my advice: Leave your calorie restrictions at the door and belly up to a buttered stack of roasted corn hoecakes. This kind of finger-lickin’ flavor is meant to be devoured, not merely eaten.

Chef Rogers hails from the California Valley. As it turns out, the spicy, fermented oak-aged hot sauce he calls “a kick in the mouth” is the first recipe he created for Hatch. I suggest dunking crackly pieces of chicken skin in the sauce before following up with his from-scratch buttermilk dip.

Don’t let his handlebar mustache fool you. This guy isn’t trying to sell you culinary tricks.

“You do fine dining for so long and you’re constantly overthinking everything. Now that I have the opportunity to relax and enjoy cooking, it’s a lot more simple,” the chef said. “I like that.”

Just take Rogers’ juicy rotisserie chicken. The free range, organic bird is flavored with nothing but a sprinkling of salt and a brine of black tea. The chef doesn’t use pepper on the chicken, as “that would distract from the flavor of the meat.”

In other words: Rogers respects the integrity of his ingredients. And it’s easy to see why. His ingredients are bomb.

That earnestness doesn’t stop at the plate. The restaurant isn’t yet a month old and it’s already on its way to becoming a zero-waste operation. Co-owners Maggie Cameron and Eric Connolly (partners in business and love) grow their own produce and bring restaurant food scraps to their 50-plus hens. Those eggs come back to the eatery and go into making epic brunch items like the Hatch Morning Pick Me Up (fried egg on grilled brioche toast with house-smoked bacon, aged cheddar, and remoulade).

But Cameron hasn’t always been a farm girl. The Connecticut native is a longtime veteran of the restaurant biz (she even toyed with starting a Thanksgiving leftovers catering company as a kid). After earning her degree in food and beverage management from the University of Massachusetts in 2005, she took her first wine tasting trip to Paso Robles.

“I recently found all the receipts from all the wineries I visited during that first trip—Pipestone, Peachy Canyon,” Cameron said. “Everyone was so cool and friendly.”

“I sold everything I couldn’t fit in my car, packed up my crappy little hatchback Ford Zx2 and went,” Cameron said. “I drove through the Rockies and listened to a lot of great books on tape. All I knew was I wanted to be in Paso Robles, and I wanted to be in the wine business.”

With not much more than a vague dream, Cameron arrived in California on her 24th birthday and soon became a full-time tasting room staff member at JUSTIN. Eight years later, she had moved up the ranks to wine club and e-commerce manager for the iconic Paso Robles winery.

“That’s where I met Eric, and that’s how we met and fell for each other,” Cameron said. “We used to hang out at Bernick’s when it used to be in this very location.”

Paso Robles residents may remember the haunt that once occupied The Hatch. Hint: Bernick’s was open late-night and served up killer sweet potato and gorgonzola fries that I still miss to this day. 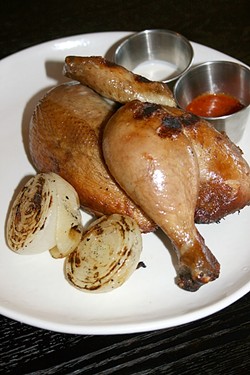 The couple still refers to The Hatch as “the old Bernick’s” in private—after all, it was the place where they laughed, ate, and first fell for each other. Now, that location is their restaurant, and they’re expecting their first child, too. (As Cameron likes to say, she’s got “a bun in the rotisserie.”)

During the years the couple spent dreaming about opening that restaurant, Connoly prepared. He worked at Napa’s French laundry, Cayucos’ now defunct Cass House, and the Bay Area’s RN74, which he also helped open.

Still, Hatch could have easily remained a pipe dream if they hadn’t put all their eggs in one basket. Last summer, the county opened up a handful of liquor licenses.

“It was a lottery; we were up in Spokane, Washington, for a wedding and mailed the check and application in,” Cameron said. “In October, we found out we had won. From that day, we had 90 days to hang a liquor license in a window and secure a lease.”

Now, the seasoned beverage manager aims to put that liquor license to very good use. The tap includes local beer and cider (Toro Creek Brewing and Bristol’s Cider among them) as well as on-tap wine offerings that span Liberty School chardonnay to Oso Libre zinfandel. 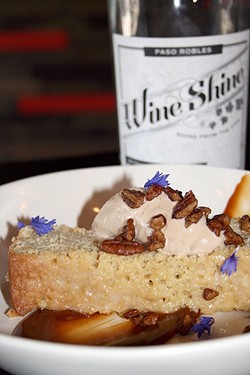 Cameron said she saw a need in Paso Robles: a yearning for something to fit between pub grub and white tablecloth.

“We wanted a joint that was just a joint—a local’s place,” Cameron said. “Why go after the tourists? If the locals are here, the tourists will come. We want the people at the tables and the people at the bar to know each other and strike up a conversation. And that’s exactly what it’s been since we opened.”

Something about a plate of chicken and waffles drizzled in sorghum syrup or a mess of mussels, Southern rice, and sausage just has a way of bringing people together.

Cameron put it simply, and I have to agree: “It’s food people want to eat.”