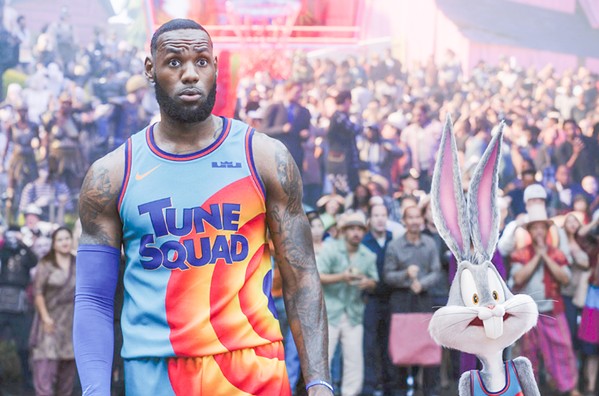 Malcolm D. Lee directs this mix of live action and animation about a rogue artificial intelligence (Don Cheadle) that kidnaps LeBron James' son, forcing the famed basketball player to team up with Bugs Bunny to win a basketball game.

When my husband told me he's never seen Space Jam, I did a double take with a "Whaaat??" because as someone who grew up in the '90s, I've seen that flick more than 20 times. Is that because it's great cinema? Not necessarily, but it sure was a lot of fun to watch animation meet real life and to watch my favorite toons take down the Goon Squad.

The premise of A New Legacy is easy enough—but this 2021 version lacks the charm or originality of the original. In this flick, we spend a lot of time in strictly animation territory, transforming Dom James (Cedric Joe), LeBron, and the other human characters into Looney Tunes. The kidnapped kid has to battle his dad's team of misfit cartoons.

It simply doesn't have the humor of the first film. I was bored from beginning to end, and while the 1996 film definitely can still make me laugh, this one didn't even evoke a chuckle. I didn't care about these characters or their plight, the stakes are too boring to feel high, and this outlandish IP branding is not even close to subtle. I understand checking this out for nostalgia reasons, but do yourself a favor and just re-watch the first film. It's better in every way. (115 min.)