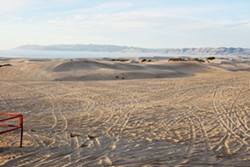 The letter, sent to the State Parks’ Off-Highway Motor Vehicle Division, asks division Deputy Director Daphne Greene to respond with any planned operational changes or strategies to mitigate particulate matter observed on the Nipomo Mesa. It also asks for the department’s cooperation with the county’s health officer to evaluate the public health effects of the dust.

“Time will tell, but we’re fully anticipating being able to work with State Parks to come to some type of resolution in how we address this,” Mecham told the Santa Maria Sun [New Times’ sister newspaper].

The supervisors’ decision stems from a Phase 2 Air Particulate study released by the San Luis Obispo County Air Pollution Control District (SLOAPCD) in February, reporting off-highway vehicle use at the Oceano Dunes as a major contributing factor to the high levels of dust recorded by the agency at the Nipomo Mesa.

In the letter, Mecham calls the study’s findings “well supported.”

“As the owner of nearly 600 acres of the Oceano Dunes SVRA, the county is concerned about the extent to which our property might be a source of the significant problems the study has identified,” the letter states. “We hope the division agrees that the study’s conclusions demand serious attention from both the state and the county.”

While the letter’s original draft mentioned only the portion of the Dunes owned by the county, supervisors agreed during the board meeting to expand the scope of the letter to include the whole SVRA.

“We are certainly concerned about the pollution emanating from the entire area, not just a portion of it,” said 5th District Supervisor Jim Patterson, who proposed the change.

Supervisors said the county’s air board would resume discussion on the issue at its next meeting on May 19.

During the board meeting, supervisors also heard comments from Nipomo residents who related personal experiences with blowing dust and the impacts on their breathing. Others felt the letter didn’t go far enough, expressing their support for a moratorium on OHV use on the dunes.

Several people told supervisors that the county has the authority to place such a moratorium. County Counsel Warren Jensen told New Times he will likely give the supervisors “confidential attorney-client advice” on the subject and couldn’t publicly comment what authority the county has.

The SLOAPCD study has been the subject of intense debate since its release. State Parks’ officials have argued against its methodology, questioning the connection between the particulate matter data, which exceeds state and federal standards, to the use of off-highway vehicles.

“State Parks’ objections are based on observations that the report merely documents natural occurring windblown sand and does not contain sufficient data to conclude that the [State Vehicular Recreation Area] contributes to a higher level of particulate emissions than are otherwise naturally occurring,” State Parks’ OHV division chief Phil Jenkins said in a recent report to the Off-Highway Motor Vehicle Recreation Commission.

Calls to the State Parks’ off-highway vehicle division were not returned as of press time. ∆