It’s New Year’s Day. The birds are chirping, the sun is blaring, and you can’t open your eyes without searing pain.

Best case scenario: You’re in your bed, a pair of wacky “2015” sunglasses tucked under your chin, a spray of celebratory gold confetti stuck to your throbbing forehead. Worst case scenario: You don’t know where you are, but wherever it is, it sure smells a heck of a lot like week-old Taco Bell.

Before you blame the bubbly—that plastic flute of sparkling wine was simply the last thing you remember drinking—we have to talk. 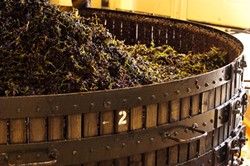 First, you might be getting a little too old for going “all out” on New Year’s Eve (check Facebook for painful proof of this). Second: Sparkling wine should not be guzzled blindly during one wild, late-night countdown per year.

Against everything you’ve been told, sparkling wines should be embraced across the seasons, 365 days per year.

Well, the really good ones should.

Speaking of really good sparkling wines, I recently had the rare pleasure of mulling this topic over with Jackie Leopold, sales and marketing administrator for Laetitia Vineyards and Winery of Arroyo Grande. As you probably already know, the renowned local producer is celebrated for its stable of tremendous sparkling wines—the kinds that should never be relegated to a single night of enjoyment.

It just wouldn’t be fair to your mouth.

“It seems people look to sparkling wines most often when they are celebrating something: weddings, anniversaries, holidays. They also get categorized as ‘appetizer’ or ‘dessert’ wines only,” Leopold said. “Not only do sparkling wines pair well with more robust dishes, but they also act as palate cleansers, allowing you to more intensely taste the multitude of flavors in any given dish.”

During these feasts, it is commonplace to overhear dramatic “oohs and ahhs” over pairings like grilled salmon with 2011 Laetitia Brut Rosé (fruity, dry, and pretty as it is delicious) or rosemary-scented chicken with their 2010 Cuvée M, packed with notes of lemon shortbread, lime blossom, and apricot jam.

I have to admit, I’ve never paired a sparkling wine with red meat, but it now sits high on my list of New Year’s resolutions—alongside adopting a jaunty mini pig and finally learning how to properly roll sushi.

Imagine this: Laetitia’s 2009 Brut Coquard, an 80/20 percent mix of sparkling pinot noir and chardonnay, paired with slow-braised short rib, Yukon potato puree, glazed carrots, and a pinot noir reduction (fun fact: that particular wine gets its name from Laetitia’s coquard basket presses, the only two of their kind in North America). As gourmet as this meal sounds, it could certainly be replicated in your own kitchen, right down to the reduction (Youtube is rife with kitchen how-tos).

I mean, hey. It’s 2015. Why not try something that tickles your tongue and breaks your weekly kitchen routine?

“Pinot noir in the blend lends beautiful notes of cocoa, dried berries, and spice, with a lift of acidity and citrus freshness from the chardonnay,” Leopold said, adding that she looks back on the aforementioned pairing with a palpable fondness.

I, for one, am glad that I’m not the only one who enjoys flipping on the dusty reel-to-reel of flavor experiences in my mind, sitting back, and thinking, “Oh yeah. That was good!”

One thing is for sure: Whether you pair Laetitia’s straw-colored 2011 Brut de Blancs (50/50 percent chardonnay and pinot blanc) with seared tilapia or their non-vintage Brut Cuvee (a blend of pinot noir, chardonnay, and pinot blanc) with fried chicken, you will come to find that these beverages offer far more than the sum of their bubbles.

For proof of this, Leopold suggests folks stop by Laetitia’s elegant tasting room and taste the winery’s brut de blancs alongside the brut de noirs. As you might have guessed, the blancs are made solely of white varietals like chardonnay and pinot blanc, and the noirs showcase the winery’s inky, estate-grown pinot noir.

“The Brut de Blancs is classically rich in notes of grapefruit pith, refreshing minerality, and lime blossom, while the Brut de Noirs shows the deeper side with notes of rich mocha, freshly baked croissant, and dried cherry nuances,” Leopold said. “Both show very well on their own and make beautiful blends together as well; think an employee who thrives while working in groups, but who is still self-motivated at the same time.”

The winery’s sparkling winemaker, Dave Hickey, is one such rockstar employee. All of Laetitia’s sparklings are produced in the labor-intensive “Méthode Champenoise” manner—the very same method that Champagne makers employ in Champagne, France.

In layman’s terms: Laetitia’s wines are never injected with CO2 or fermented in large closed-top tanks (like your favorite cola). Instead, the wines go through what Hickey and other folks in the biz call “secondary fermentation,” occurring inside the bottle itself.

The result: Small, delicate bubbles, a creamier mouth feel, and a broader depth of complexity. As Leopold is known to tell tasters, “All of the bottles turn into individual fermentation vessels.”  She’s also known to recall a strange history lesson that Hickey shared with winery staff back in 2009.

If that isn’t proof that sparkling wines deserve a fixed spotlight on your menu throughout the year, I don’t know what to tell you.

As always, be sure to drink responsibly. We wouldn’t want another repeat of New Year’s Eve, where you kissed the bouncer as the ball dropped. When the fizz stars flying, it can be easy to get carried away.

“There is something about the energy and life inside of the bottle that is so tangible and relatable to our feelings of excitement of a new year coming upon us,” Leopold said.