What do Buzz Aldrin, Joey Ramone, and Amelia Earhart have in common? They went bravely into that great unknown. They put their eggs in one basket. They took chances—and as a result—changed the American cultural landscape forever.

Chances are, Spearhead Coffee will not change America, but it will change downtown Paso Robles. 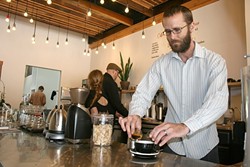 Regulars of the sparse, modern specialty coffee house would argue that ripples have already begun to expand outward. Since Spearhead’s soft opening about four months ago, residents have taken a shine to the thoughtfully fashioned farm-to-cup java.

Organic, small-batch beans are sourced from across the globe, expertly roasted on-site, and prepared with OCD-like precision.

This coffee is the crème de le crème. Translation: It’s so good, no cream is needed. Seriously, put down the Coffee-mate!

If you’re not a coffee nerd yet, you will probably become one soon. Like smart phones and craft beer, specialty coffee is poised to wriggle its way into our lives—and our culture—for good.

Just ask our neighbors “Down Undah.” According to head roaster and co-owner Jeremy Sizemore, those wild Australians are at least a decade ahead of America when it comes to obsessing over coffee bean varietals and roasting practices.

“One of our regulars is a family from Australia who relocated here. They tried a few coffee places around, and it just wasn’t doing it for them,” Sizemore said. “Now, they are literally here every day.”

But don’t take Sizemore’s word for it. Head on into Spearhead. Order a cold brew, cappuccino, or pour over. The most important thing you should ask yourself is: “What do I taste?” “Would this experience add more value or pleasure to my morning/afternoon/night?”

If so, then I say why not throw down a few bucks for an above-average cup or a bag o’ beans? If it doesn’t mean much to you, stick with your daily AM/PM coffee, or whatever caffeinated swill you prefer.

Personally, I would argue that life really is about those simple pleasures—a dictum I don’t have to argue in Paso Robles Wine Country, home of laid back picnics and sun dappled winemaker dinners.

The Spearhead gang feels the same way, which is why cowboy wine country actually made a whole lot of sense in terms of location.

“We spearheaded specialty coffee in Paso Robles because we want to cater to the foodie culture that’s here. It’s really fun to roast the very best coffee we can possibly source and offer it to a community that has a palate to appreciate it,” Sizemore said. “Some people are still learning, and that’s also our mission: to educate.”

Along with Spearhead partners lead barista Matt Klomp and Joseph Gerardis (known locally as owner of Joebella), Sizemore is spreading the good word of good coffee.

With third-wave roasters like Kreuzberg, Scout, and Joebella already making a racket in SLO County, that gospel has ballooned into a full-fledged church choir.

Turns out, SLO’s tastemakers are listening.

“I always hear customers say, ‘Do you know who that is?’” Sizemore said. “I’m not a name dropper at all, but I’ll hear, ‘Oh that’s so-and-so’s winemaker or chef, the brewer at Toro Creek Brewing Company, or the owner of BarrelHouse Brewing,” Sizemore said. “I think they like our coffee because we go the extra mile, because we view coffee with one part science, one part art.”

Word on the street: You can even sign up for Spearhead’s cutting-edge “coffee club” sooner rather than later.

“It’s exactly like a wine club, where you can become a member and get a different coffee every month; we’ll have pick-up parties and the whole deal,” Sizemore said. “We want to say thanks to the community. We hit the ground running and were greeted with open arms. It’s so beautiful how much we were welcomed.”

Share in that community coffee love and check out Spearhead’s anticipated grand opening slated at the coffee shop around 7 p.m. on Friday, May 22. Sensory pleasures are set to include music by the Eager Seas (formerly Lakes), wine by Halter Ranch, and—of course—buzz-worthy coffee tastings.

The only hard part is deciding which way to go—“up” with caffeine or “down” with alcohol.

Sizemore suggests going for the coffee first before sinking into that feel-good vino (although he did give me his blessing to double-fist, if I so desired). Whatever you decide, I’d like to make the plea: Life is too short to drink a bad cup of either.

Hayley Thomas can’t hear you over the sound of her coffee grinder at hthomas@newtimesslo.com.