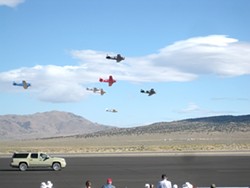 The engine of George Giboney’s Thunder Mustang, a plane built for racing, shut off. Without an engine, such a heavily modified plane—made for speed, with its short, stubby wings—would glide slightly better than a rock. A pilot has just seconds after an engine failure before ending up on the ground—one way or another. Giboney pulled out, trading the plane’s speed for altitude to buy as much time as possible and glide down to a safe landing spot.

For a few seconds, the crowd lost sight of Giboney. Then the ailing plane came back into focus, setting up to make an emergency landing on the runway nearest the exhibition and the crowd.

People gasped and everyone leapt to their feet, watching in disbelief and dreadful anticipation as the plane approached the runway, slanting into the crosswind, too slow and too low, heading for a row of parked jets. It hit the ground at an angle and bounced before turning on its side and smacking down again on its wingtip, violently cartwheeling and sending an explosion of engine, gear, and tailpieces in front of the crowd. People stood in silence, interrupted only by the sirens of the emergency vehicles. Finally, there was a sigh of relief and a smattering of cheers once Giboney stood on top of the plane’s remains and raised his arms into the air.

“Oh, this article is about those twirly airplane competitions that happen over the water in San Francisco and San Diego,” you think. No. This is the Reno Air Races—the air-racer’s air race, the undoubted pinnacle of airplane competition, and the world’s fastest motor sport. It happens only once a year at the desolate wind-swept Reno Stead Field in Nevada.

This year, two San Luis Obispo-area teams—Relentless Air Racing and Bad Intentions—competed in the super-sport class, which is Reno’s second most dangerous and intense level. Super-sport has few limitations, and pilots fly very much on the edge of their own and their machines’ abilities. In preparation for the final day (the event lasts four days in late September, culminating in Sunday’s big races), one local pilot, Kevin Eldredge, crashed. The San Luis Obispo-based Nemesis NXT—a sleek plane designed and built specifically for the races, and one that was going to challenge for the win—suffered an engine failure that caused the propeller to fly off the aircraft, suddenly turning the plane into a high-speed glider. Eldredge managed to bring the plane down safely, and fire crews were able to limit damage to the plane. It will fly again.

“Clearly what we do is race on the edge,” Eldredge said. “I went just a bit beyond it, and luckily survived.”

In one of the last races, during the super-sport class, Mike Dacey of Pismo Beach in his heavily modified Questair Venture—a peculiar looking, squat, and short-winged airplane that goes by the name Bad Intentions—reached a speed of 374 miles per hour and captured the gold prize. Dacey is humble when talking about his success.

“We’ve been working on it for a good 10 years and getting faster and faster every year,” he said. “One thing we’ve had going for us over the years is reliability. We can go a good deal faster, but Sunday’s turbulence was so bad that it just wasn’t worth it. … Once I knew I was ahead, I didn’t push the plane any more than I needed to.”

It was in that same race that Giboney, a pilot out of Des Moines, crashed his Thunder Mustang named Rapid Travel. In fact, Giboney was on Dacey’s tail for three laps before his engine died, forcing him to pull out.

“George was trying to catch me, and basically his engine wasn’t strong enough,” Dacey said. “It’s a miracle he was not seriously hurt.”

The Reno Air Races have run since 1964, but 2007 was likely the blackest year for the event when three pilots died in separate accidents. To this day, a total of 19 pilots have lost their lives in the pursuit of speed at the Reno Air Races. That sobering fact unquestionably contributes to the strong feeling of camaraderie among the pilots.

“We help each other out with either parts or tools, help the other team keep going,” Dacey said. “At the same time, we’re all here to race. People are competitive, and they want to win, but the main thing is to win without endangering yourself or others around you.”

At the beginning of every race, the planes take off individually and then form a line following the instructions of a jet “controller-plane.” The planes are guided to the start of the course, and after crossing the start line, all equality and form ends. Imagine a group of eight massive one-of-a-kind airplanes, heavily modified World War II fighters, each being pulled by upwards of 4,000 horsepower, accelerating down the starting straight and screaming into the first turn. Speeds in the unlimited category of races can exceed 500 miles per hour, even as the planes skim 50 to 100 feet off the ground. During such races, the planes pull close to five Gs for six laps of the 60-mile race around a set of tall pylons. There is no room for error, and the race is over in about 10 minutes.

Races are divided into different categories: T-6, biplane, formula one, sport, jet, super-sport, and unlimited, to name a few. Each class has its own rule set, and most are made to be easily accessible to those racers who don’t want to dedicate their entire lives to Reno.

As suggested by the name, unlimited is the most grueling, a race class in which the competitive teams work for a full year, spending hundreds of thousands of dollars in anticipation of those final 10 minutes. In the unlimited class, there are only three rules: the plane must be propeller powered, have a reciprocating engine (a traditional piston-type), and be heavy enough to avoid being smashed into the ground by the disturbed air left behind by other competitors. The famous simple description of the Reno races is valid in this class more so than any other: “Fly low, go fast, turn left.”

Event safety is paramount, but everyone in the cockpits and the grandstands has no illusion about the risks involved—this is a temple of speed, and everyone realizes what sacrifices might have to be made. Every year, these intense races test the skills of pilots and airplane constructors from around the country.

“Each year is different, and winning is a tenuous thing,” Dacey said. “We were fortunate this year, and we’ll probably go back again next year, because we’re constantly trying to improve our plane’s speed and our own abilities, trying to get better and better. I don’t think anyone’s ever run a perfect race, so I’ll keep trying to do that, even though it may be unattainable.” ∆

Intern Gene Gisin can be reached through Executive Editor Ryan Miller at rmiller@newtimesslo.com.