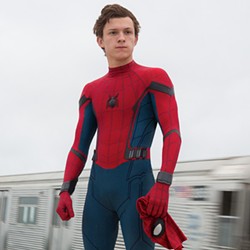 This new Spider-Man film picks up a few months after the events of Captain America: Civil War, which chronicled the rift between Captain America (Chris Evans) and Iron Man (Robert Downey Jr.). This time around, Tony Stark (AKA Iron Man) and the federal government create the Department of Damage Control (D.O.D.C.), which inadvertently drives Adrian Toomes (Michael Keaton) out of business, leading him to become the villain Vulture. Meanwhile Peter Parker (Tom Holland) returns to his studies after Stark tells him he's not ready to be an Avenger, but that doesn't stop Peter from pursuing his crime fighting endeavors. This sixth installment in the Spider-Man franchise is directed by Jon Watts (Clown, Cop Car) with a screenplay by Jonathan Goldstein and John Francis Daley (Horrible Bosses, The Incredible Burt Wonderstone, Cloudy with a Chance of Meatballs).