You won’t find a more unlikely artistic duo than Mignon Khargie and Neal Breton. She’s a graphic designer. He’s a thoroughly analog illustrator whose idea of high tech is photocopying something and gluing things onto it. 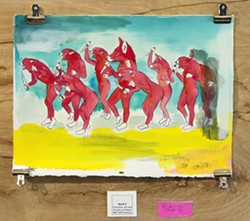 Khargie’s aesthetic is clean and minimal; her images composites of unbroken lines in a sea of heavenly white space. Breton is messy, frequently painting and drawing on torn sheets of paper, often marking his work with deliberate smudges and a signature coffee cup stain.

And yet side-by-side, at a joint show at Linnaea’s Café, there’s something refreshing about this pairing. The animal kingdom is the show’s theme, a topic that appears to mean something drastically different to each artist. For Breton, a frequent New Times illustrator, animals are a way to characterize the women in his life. They can be aggressive, benign, pleasant, or bizarre; solitary creatures or pack animals. Nude human bodies, often covered in scales or fur, are given animal heads. A pack of anthropomorphized foxes bare their teeth mockingly in Skulk R, butcher’s knives clutched in hands as white as ladies’ gloves.

Khargie’s creatures, in their stylish simplicity, are almost like logos, as if each species were a brand to be marketed. Formerly the art director at Salon.com, Khargie’s use of lines is ingenious. Remember how the Etch-a-Sketch challenged you to create an image using a single uninterrupted line? Here, Khargie takes that notion and sophisticates it. The line created by a snail’s trail is neatly continued in the spiral of its shell; a stingray seems to consist of a single elegant flourish.

The graphic designer’s minimalist animals seem to have reached a place where they can be deconstructed no further, not without losing their little personalities. The weasels in her Weasels (and a log) are the essence of weasels, down to the way the animals walk, climb, and stand upright, alert; down to the curious angles of their heads, the mischief in their twitching noses. The log in the piece is only a most delicately implied log—a conceptual log!—its form allowed by negative space. 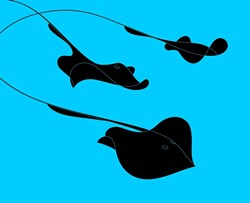 Where Khargie’s work radiates a kind of simple purity, Breton’s is littered with cheeky innuendo. A nude woman with an owl’s head poses self-consciously, brandishing a field mouse at arm’s length. She wears only socks. The ink, gouache, and watercolor piece is a near-perfect replica of a photo the artist found, one of those saucy cell-phone-held-up-to-a-mirror shots. The mouse has replaced the phone.

Breton’s animal women can be dangerous or vulnerable, domestic or wild. A quiver of cobras, each poised to strike, are reimagined as an all-girl biker gang. A ram’s head rests on a woman’s matronly figure. Seated in rocking chairs, two bird-headed women with perky boobs exchange pleasantries over a cup of tea in Phainopepla. The word “tacit” is scrawled on both sides of the piece, as if to imply a kind of unspoken understanding.

Breton’s drawings and paintings have been hung up with clips and wire across a wooden board, a contraption made for him by local artist and woodworker Jamie Coxon. Khargie’s work has been either printed on paper and framed, or painstakingly reproduced by hand as paintings. There is something odd about the latter; seeing such clean, exact, unpainterly graphic illustrations as acrylic works on canvas. I mean, paintings are organic, messy, and one-of-a-kind. Graphic design is clean, shiny, flat, and made to be duplicated. Painting is artistic. Graphic design is commercial. They can’t be friends, right?