Spirits in the Bee Box

What happens when a really amazing chef opens a distillery? Food appears. Education seeps in. And then all the people who normally wouldn't want to visit a distillery come out to the new hangout on Traffic Way. 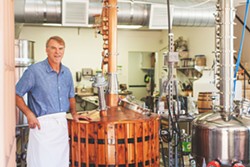 Carrying out a stunningly pretty bottle of organic Forager gin, I left Central Coast Distillery with a new respect for owner and distiller Eric Olson. I'm thinking it's going to go well with Campari, possibly garnished with a wildflower and a slice of lime. Maybe a splash of just foraged elderberry syrup that Olson was talking about. The next thing I'll try is his vodka distilled from raw honey—hence the name he calls his welcome little tasting room in A-town, the Bee Box. He makes a gorgeous cocktail with all those spirits he crafts by hand.

His shelf of mixers looks a bit like an apothecary: mismatched jars filled with natural toned needles and sprigs and curious shapes of flora and fauna. Olson is an expert forager and—I say this with my serious face—he can use a real machete, and he has. He treks through the land and sea of SLO County to find the essential botanical elements for use in his cocktails, menus, and garnishes.

Apparently, Olson comes from a long line of distillers. His ancestors were the first "druggists" in California, so during the Prohibition era, they could legally dispense alcohol. They foraged and made their spirits in stills. It's no wonder—when Olson was working as executive chef at Cello Ristorante and Bar in Allegretto, Paso Robles, he made those famous acorn pancakes.

"Anything the Indians and settlers did, I learned to do through the military or through my family," Olson said, noting he's also learned from traveling the world—22 countries to be exact. Born in Los Altos, California, Olson has attended three top culinary schools and has worked in some of the most esteemed restaurants in the state, but he said he learned just as much traveling abroad.

"As I'd go, I'd taste their alcohols, taste their wines, and go to their distilleries," Olson said. In his tenure in the restaurant business, Olson never shied away from making the occasional drink for a customer waiting for their bartender. And that gave him an idea.

"I'm going to start making drinks that heal you," Olson had said of his mindset to create a clean spirit. When he created the organically, naturally focused Centrally Grown in Cambria, he was introducing milk thistle and willow bark into his dishes.

He began incorporating medicinal elements into his tonics and elixirs, such as natural herbs, botanicals, and buds—some foraged, some organically farmed. He's learned a few things throughout the years about the power of food in healing, and this is something he carried throughout his 20-year career as a chef.

Olson's been working every shift, holding tastings and tours and classes in cocktail making, cooking, and distilling for Cal Poly students and professionals. And though he seems to think it's nothin', he'll whip up ceviche from the local abalone farm, or a charcuterie platter, smoked fish, grilled panini, soups or homemade pizza on any given night. As a Le Cordon Bleu Paris-trained, world-traveled chef, he takes a culinary approach to everything, sourcing his spirits through local farmers, ranchers, and beekeepers. 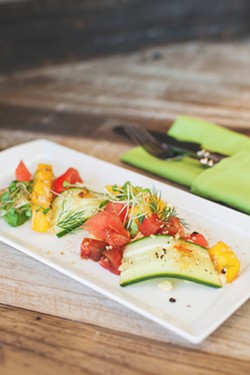 He produces a premium spirit line called Forager with a growing list of products produced and bottled in his distillery: CCOF and CDHS certified organic gin, vodka distilled from raw honey, rum aged in bourbon barrels, bourbon whiskey, orange liqueur, and brandy liqueur. Every bottle is produced and labeled in the immaculate, fully sustainable and Earth-conscious 650-square-foot facility.

The Forager rum won the double gold medal at the International Spirit Competition in Colorado, and the Forager vodka is also winning top awards. I pointed to the plaques on the wall. Didn't you just open? I asked Olson.

I have a feeling he's going to be winning more plaques. The gin I tasted will honor your martini glass with a jazz snap—clean and pure—distilled 10 times from vodka and bottled at 89 proof. Notes of mignonette pepper and coriander come through right away, and juniper berry lingers on the finish.

"It's in the Prohibition style, so you can hide the alcohol in the wine," he said.

The downtown distillery location has been growing, and Olson said the city of Atascadero has been a hundred percent behind his new operation, which opened its brick-and-mortar last summer. Manuel Barba, from Traffic Records, set up a turntable upstairs with the latest in vinyl. Tyler and Shannon Clark at The Raconteur Room send people to Olson, and Olson sends people to them. He cooks the agave plants for the new CBD shop. Guys and gals from the nearby pilates studio, insurance company, and the Fine Arts Academy come over and visit from time to time.

"All those people make a community," Olson said with sincere gratitude for the warm welcome. "You know it takes a village to raise a village—that's what's doing this thing."

Oftentimes, breweries, wineries, and distilleries get so big, you rarely see the makers of the spirits, but if you go by Central Coast Distillery, you'll undoubtedly see Olson himself. He knows what he's doing, and he'll take great care of you. Δ