Split decision: Despite vocal protests, a new ICE processing facility is coming to the Central Coast

by Rhys Heyden and Amy Asman 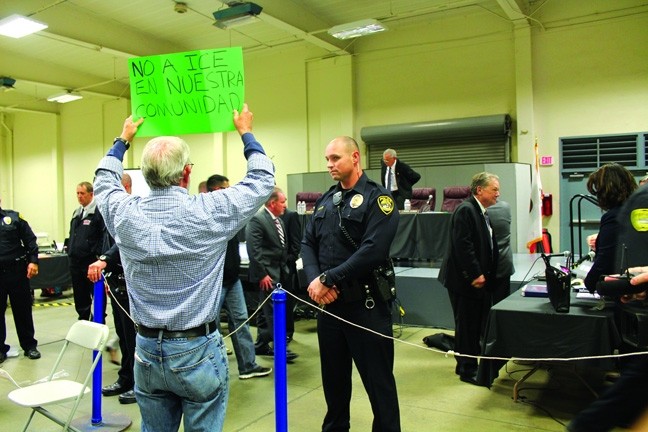 After a months-long maelstrom of meetings, speeches, protests, and emotions, the Santa Maria City Council put an end to what has been an extremely divisive issue—the planned construction of an Immigration and Customs Enforcement (ICE) facility in Santa Maria—with a narrow 3-2 vote to approve the project on March 27.

Though the facility will be built in Santa Maria, the plan has drawn the attention and ire of citizens and activists throughout the Central Coast, who have expressed concerns about the wide-ranging implications of the project.

“Practically, if the facility is what ICE says it is, then the physical change for Santa Barbara and San Luis Obispo counties would not be substantial,” said Paso Robles-based immigration attorney Kevin Gregg. “That said, the difference—perception-wise and emotionally—is enormous.”

In the days following the March 27 decision, Gregg said that several clients from immigrant families have come into his office and said that they, their friends, or their family are planning on moving away from the area before the ICE facility is constructed.

“Given their experiences, it’s understandable that migrant communities are scared of a new ICE presence,” Gregg said. “ICE doesn’t really do positive community outreach like other law enforcement agencies, and there are very few people in Santa Maria who haven’t been affected by ICE in one way or another.”

According to ICE officials, the proposed office would serve as a processing facility solely for undocumented inmates coming out of the Lompoc Penitentiary, the California Men’s Colony, and the San Luis Obispo and Santa Barbra County jails.

The 12,700-square-foot office would have 6-foot-tall picketed iron fences in front and an 8-foot-tall curved iron fence and a small “sally port” fence in the back. The building’s façade would be similar to nearby medical offices, with stone and stucco veneers.

The Santa Maria City Council’s March 27 special meeting to discuss four appeals against the Planning Commission’s February decision to grant a development permit for the ICE project started at 3 p.m., dragged on for more than eight hours, and drew more than 1,200 locals.

During public comment, Richard Quandt, president of the Grower-Shipper Association of San Luis Obispo and Santa Barbara counties and a powerful Central Coast agricultural figure, spoke to the council about his industry’s concerns about the ICE facility.

“Considerable fear has been generated by this project, and the fear of families being separated is real and genuine,” Quandt said. He went on to opine that ICE’s mission to target only undocumented criminals “could change at any moment.”

Project designer Bruce Fraser countered that the majority of these claims were purely emotional and based on “vague fear and conjecture.” He asked the council to “return to objective, fact-based information” and argued that there’s no other suitable location for the facility because of certain legal requirements and that ICE’s mission “will not change because of relocation of the building.”

In their rebuttals, appellants for the project argued that the project didn’t adequately address the potential increase of traffic or the long-term economic and emotional impact of having an ICE facility in town.

“It’s already devastated our community. It’s caused a ripple effect throughout the community,” appellant and League of United Latin American Citizens member Gloria Acosta said, through tears. “I would hate to see hardworking families leave [because of ICE]. … The city of Santa Maria has always had open arms to newcomers. Please do not tear our city apart.”

After listening to presentations from city staffers, the appellants, and the developers—as well as public comment from dozens of concerned citizens—the council voted 3-2, with Mayor Alice Patino and Councilmember Terri Zuniga dissenting, to uphold the Planning Commission’s decision.

The vote didn’t sit well with the meeting’s several hundred remaining attendees and spurred some to start chanting what sounded like “We remember the KKK!” Others wiped away tears as they made their way outside and back to their homes.

Dennis Apel—who recently made national headlines because of his protests at Vandenberg Air Force Base and the resulting U.S. Supreme Court case—approached the dais with a sign reading “NO A ICE EN NUESTRA COMUNIDAD” and loudly challenged the council members’ decision. The move prompted Police Chief Ralph Martin and other officers to form a human barricade between the public and the council members and developers as they left the building.

Directly after the meeting, Congresswoman Lois Capps (D-CA), who represents all of San Luis Obispo and Santa Barbara counties, expressed her displeasure with the ICE decision in a media statement.

“I am very disappointed by the City Council’s decision to move forward on this project, a decision they made over the objections of so many in the broader Santa Maria community,” Capps said.

Capps had previously written two letters to ICE criticizing the “lack of public information regarding this process in the Santa Maria community and the speed with which these important decisions are being made” and asking for a delay in the process to “fully explore the long-term impact of such a facility.” Neither of the letters received a response.

Gregg said that even though the ICE facility—as proposed—would only apply to undocumented immigrants in the criminal justice system, many of his clients in the local migrant worker community don’t trust ICE on any level, and therefore are stricken with uncertainty and fear about what the facility portends.

“It’s a real impact, whether it’s real or not,” Gregg said.