One spoon at a time

Lori Wolf Grillias’s artwork, including pieces
like The Spoon Tree Project, will be on
display as part of the Alternative Viewpoints
exhibit at the SLO Museum of Art from Feb. 2
to April 1. Visit sloma.org for more information.

For the longest time, the dwindling supply of spoons caused Lori Wolf Grillias to agonize and worry. Each vanishing spoon could be a sign that a loved family member was reaching not for nourishment, but feeding an addiction to heroin.

"Witnessing that and the stress and pain they go through ... it's challenging and it rips everyone apart," Wolf Grillias said. "I'm learning I can only take care of myself and be better for them." 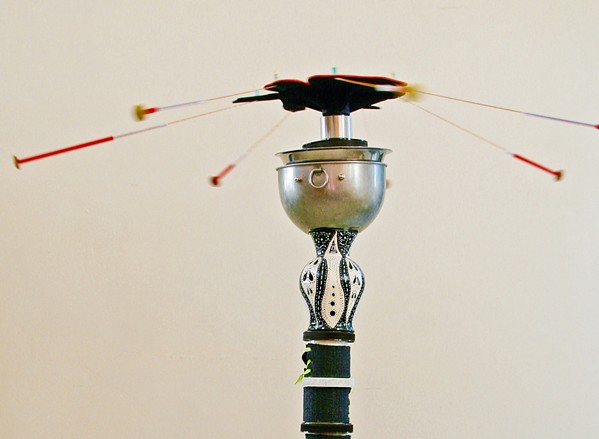 As a way to heal and connect with others whose lives have been touched by the opioid pandemic, the Arroyo Grande-based artist put out a call to her community for spoons. And more than 170 spoons poured in at her regular haunts like Red Dirt Coffee, Kennedy Club Fitness, and Rutiz Family Farms. She connected those spoons together to form a sculpture, The Spoon Tree Project, that's on display starting Feb. 2 at the San Luis Obispo Museum of Art as part of the Alternative Viewpoints exhibit, which features paintings and sculptures by Wolf Grillias exploring substance abuse and opioid addiction.

"I was really touched," she said. "It just inspired me to another level that I'd never experienced before. It's pretty raw. You meet someone at the same playing field and you make art with them."

Some spoons came with letters or messages that brought the artist to tears. They were about children, parents, or friends who struggled with or lost the fight to addiction. At least two spoons are from local families that lost a child to a heroin overdose within the last year. Stainless steel, silver, hand forged, long handled, and residue-bearing spoons all made their way to Wolf Grillias.

To make The Spoon Tree Project, the metal spoons were each drilled three times—at the top and bottom to connect them to one other, and the hole at the center of the spoon to release negative spirits. And this tree still has room to grow. Wolf Grillias will be accepting spoons from the public throughout the duration of the exhibit to be added to the tree. Wooden spoons will also be available at the museum for anyone who's moved enough to write a message or name on one and add it to a special section of the tree.

"I think in a way it's a ceremonial piece," Wolf Grillias said. "I want the door to always be open to anyone who walks in and can say, 'Yeah, I've been there.' I'm healing by reaching out."

Another of Wolf Grillias' pieces, 5 and 1, is a multimedia work that speaks to the quick turns on the path of addiction. An image of a poppy is affixed to a timer that's spinning. Straws that look like syringes with what appears to be blood inside of them shoot out from the poppy. Wolf Grillias said the piece is a nod to the fact that it just takes five minutes or less for someone to die from an overdose. It's an addiction that doesn't always give people the luxury of time to work things out.

Arts Editor Ryah Cooley is raising a spoon in solidarity at rcooley@newtimesslo.com.