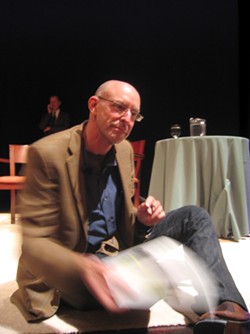 Cal Poly President Warren Baker has continued to come under fire after a controversial decision to change the format of an Oct. 15 free lecture by best-selling food author Michael Pollan.

State Senator Leland Yee, a Democrat from San Francisco, is the latest to weigh in on the issue, which has received national media coverage since New Times broke the story Oct. 8. Pollan appeared in a panel discussion with a leading meat-science professor, following a letter to Baker from the Harris Ranch Beef Company chairman threatening to stop financially supporting the university if Pollan’s viewpoint was “unchallenged.”

Yee issued a statement on Oct. 19 calling the incident “a gross violation of academic freedom.”

The state senator added, “Our public institutions of higher learning are supposed to be free from corporate meddling. Instead, Cal Poly has enabled a culture of corruption and has said to the world that their curriculum can be bought. Corporate executives should not be calling the shots at our public universities.”

His statement added, “The decision by the administration at Cal Poly sets a very dangerous precedent. Should we really have to ask if a lecture by Al Gore will now turn into a panel discussion on the validity of global warming? Or, will a screening of the movie Milk now require a response from Anita Bryant? Or, will a presentation on the effects of smoking now include a rebuttal from the tobacco industry?”

Pollan’s Oct. 15 appearance at Cal Poly also elicited a response from a self-described coalition of students, faculty, alumni, staff, and community members who came together out of concern over how Pollan’s lecture became a panel discussion with others.

The group later said it distributed more than a thousand official-looking programs at the event, including excerpts from a Cal Poly Academic Senate resolution on academic freedom, signed by Baker on June 22, 2009.

Their “program” stated, “Regardless of your views on conventional versus sustainable agriculture, we should all be able to agree that no special interest should have the ability to censor, influence, or control the presentation of ideas on our campus.”

It asked attendees to consider some questions, including, “How does Cal Poly’s caving to the demands of the Harris Ranch Beef Company corrupt academic freedom and devalue education? … Whose interests should President Baker be protecting? Do students need to be protected from a diversity of viewpoints?”

Baker’s Sept. 28 reply to Wood stated, “A professor’s freedom of opinion is a piece of academic freedom; academic freedom, a pillar of American universities, also calls for peer debate among the faculty as to what should be taught in the classroom. Your concerns will certainly spur such a dialogue between Mr. Rutherford and his peers in the Animal Science department.”

Rutherford later told New Times that a decision had been made to change the “Issues in Animal Agriculture” class he had been teaching to an elective, rather than a required class. He said that decision was “unrelated” to the Harris Ranch letter.