Wordsauce had a problem: the police.

Apparently, being too funky and flowing out of your mind might also be considered disturbing noise to some members of the general SLO population. 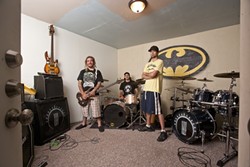 So Wordsauce members Billy Gerhardt, Nathan Jones, and Wesley Price decided to solve that problem the only way they knew how. They opened a business.

Wordsauce is a live instrumental hip-hop-funk-jazz-everything band that’s been playing since 2009 and has been, as its Facebook page states, “oozing over the Central Coast with sick beats and funky flows” ever since.

The Sauce Pot builds off the Wordsauce brand, if you will, by representing the band members’ attempts to work as musicians, to own a space, to be in control, and to play music how and when they wanted.

Wordsauce, as a group, specializes in “multi-dimensional, cross-contaminated hip hop-jazz-funk flows.” Aiming to propagate the culture, the Sauce Pot is the perfect outlet for their creative desires and provides a space for serious musicians to work without hassle, a place where they can let their creativity flow.

The Sauce Pot opened Sept. 1 and is a private and secure rehearsal space. It comes equipped with double deadbolts, keyed entry, security cameras, and a secluded room featuring double thick walls. Bands may come and go as they please any day of the week.

“It helps musicians be more creative in their own zone,” Gerhardt said. “They can express themselves whenever they want.”

Though there might be music playing all night, it’s a space for serious musicians to practice.

The space is set up for “working musicians.” And since said musicians will be spending what little money they have on a place to practice, it follows that they’ll be taking their time seriously.

While Wordsauce regularly practiced in their living room, the SLO police would regularly come by and give them a ticket for partying.

“We had four people in the house and they said we were partying,” Price chuckled.

Tired of paying for tickets to play in a house for which they already paid rent, dealing with pesky neighbors who had the “police on speed dial,” and working within the tricky noise violation laws, the group decided to open its own place. The band wanted an out-of-the-way space where they didn’t have to worry about noise complaints or being hassled.

“We did a lot of research,” Jones said.

The group wanted to be as unobtrusive as possible and searched for a spot with friendly neighbors who wouldn’t mind loud music or people coming and going at odd hours.

“We talked to every landlord in SLO,” Price said.

“It’s not about trying to make a profit, it’s about support, networking, working on your craft, and propagating,” Gerhardt said.

Other popular SLO bands practice there, too, such as Kauza Fex, Wintersfear, and Bones from Poets.

“It makes me smile, ear to ear, to walk down the halls and hear so many styles,” Gerhardt said. “I hear heavy bass in one room and guitar in the other.”

The 14th annual Open Studios Art Tour, the largest visual art event on the Central Coast, is coming to SLO County Oct. 13 to 14 and Oct. 20 to 21 from 10 a.m. to 5 p.m. To plan your route and more fully enjoy the activities, you’ll need a catalog. For more information and to download the catalog, visit artsobispo.org.