In one swift, deft motion, Michelle Angell uses a mud-crusted cowboy boot to turn over a milk crate full of overripe Hass avocados.

The glossy black and green fruit roll across the dusty landscape making a soft sound equivalent to a piggy dinner bell.

“Come and get it,” Angell calls, squinting from behind the brim of her worn baseball cap.

The floppy-eared hogs (a mix of Gloucestershine, Berkshire, Large Black, and Red Wattle breeds) are in full trot, suddenly alert and ambitious. The musky animals—surprisingly jovial and friendly—are snorting all around us like plump, wiry-haired dogs. After lunch, Angell bends down to rub one beast’s protruding belly.

Despite the fact that the dirt beneath our feet has been completely stripped of vegetation thanks to 216 hooves and 54 snouts, the surrounding scene is breathtaking.

Cambria’s undulating hills are peppered with shockingly lush, green foliage, and to the west, the view cascades dramatically down, past leafy avocado orchards to a cool strip of blue in the distance: the Pacific Ocean.

These truly free-range pigs enjoy a view rivaling that of Hearst Castle, but that’s not the only reason why high-end chefs in Los Angeles and the Bay Area vie for the pricey, marbled meat. Flavor and integrity go hand in hand here. Chef Phillip Lee of Los Angeles’ Scratch Bar is not only a fan of Stepladder’s pork and goat cheeses; he’s a frequent visitor.

Before we adventure further, I have to disclose that this “pig paradise” isn’t part of Stepladder Ranch’s normal tour route, which instead focuses primarily on the creamery side of things. I have to thank Angell for humoring this pork-obsessed writer and her mom, both of whom walked away feeling like they’d just met the happiest pigs on Earth.

As my mom likes to say, “They only have one bad day.”

The land is happy, too. Not much is wasted here; every element serves a purpose. In addition to noshing on surplus squash and pumpkin from a friend’s farm and spent grain from local breweries, the pigs regularly eat whey leftover from the cheese-making process.

This ingenuity is all in a day’s work for third-generation farmer Jack Rudolph, who took over the 174-acre ranch four years ago. Now, he’s carrying on what his late grandfather, Jack Russel, began in 1970, and then some. The original 40 acres of neglected avocados has flourished and is currently growing in acreage. Over the past few years, Rudolph has also conducted many “experiments,” the most successful of which might be Stepladder’s avocado-citrus blossom honey and tangy passion fruit, both of which are delicious when shaken into crafty cocktails or folded into desserts.

“We have 150 different kinds of fruit trees in our orchard; different mangos, papayas, and we’re going to pick our first bananas this year,” Rudolph says during my first visit to the property with a group of media and 101 Wine Tours. “It’s just warm enough here so that these crops can survive the winters. We have a coffee trial of 100 plants, but we lost some to frost. We’re really trying the shotgun approach and seeing what will stick. The passion fruit started out as an experiment and now we are at 3,000 plants in our greenhouse.”

Risk. Experimentation. Play. It’s all part of Rudolph’s DNA. He cut his teeth in the tech world, discovering his love of goats after visiting a goat dairy in Northern California with his sister. Soon after, he got his hands on some fresh goat milk and began making cheeses. At the time, he was still working at a tech startup in Palo Alto. Eventually, the economics major made the leap from white collar to rancher. I can see why Rudolph fell for the fuzzy, hard-headed creatures.

During my own tour of the creamery, I felt like I had somehow hit my head and landed in a pastoral heaven where the grass is too green and the sky too blue. Maybe it was the oodles of irresistible baby goats calling out for a bottle feeding (which I gladly performed). Maybe it was the sheer elevation.

Sophia Stephens, who runs the marketing side as well as the property’s epic wedding venue and vacation rental, is sort of like an angel. 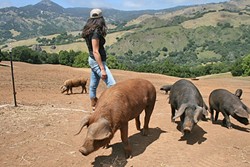 “As you come up the hill, you enter at creek level, and the property climbs to over 2,000 feet at the top. We believe you ‘climb the ladder’ of the elevations on the ranch,” she says, adding that yes—the mysterious vines growing on each side of the dirt path are, indeed, vigorous passionfruit “growing like weeds.”

Adds Jack, “It’s not the ‘full extension ladder,’ which goes even higher.”

We look up toward craggy green peaks, where a lone turkey vulture hangs in the sky (thanks to a sweet thermal, Rudolph has spotted something like 85 in the sky at once). Eagles and mountain lions are not uncommon.

Upon entering this scenic world, a few things catch your eye right away: A shop beckons, where you can buy a bag of mixed citrus and avocado, a glass jar filled with honey, or a wedge of sharp cow’s milk Clothbound Cheddar, killer when paired alongside a hoppy IPA. Nearby, a bright red barn holds creamery equipment and wheels upon wheels of cheeses yet to be released into the world. This is where dreams are truly made.

“The creamery and dairy is built inside of our old barn, which was built in 1915. We converted its use and made it into a creamery on its 100th birthday,” Rudolph said. “It was built by an old Danish barn builder who came through the area and created these crazy laminated tresses by bending and nailing them together. Legend has it, he used horses to bend the material around trees.” 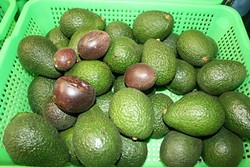 Although this folksy story adds richness to the operation, the interior is totally modern and clean. I discard my shoes and slip into crocks before entering the sterile lab-like environment. This, too, is not part of the normal tour, but aren’t you glad I’m here to tell you about this cheesy Promised Land?

Enter, Fort Knox—the aging room. Ceiling-high racks are filled with precious wheels of cow, goat, and mixed-milk cheeses. Some are destined to become soft and spreadable while others will mature into a tangy, crystalline blocks shimmering with coveted “cheese pearls.”

The moldy, briny smell is overwhelming and exhilarating, a combination of standing in an earthen forest and walking along the ocean.

“It’s like winemaking, except there’s harvest every day,” Angell says with a laugh, this time trading her ball cap for a plastic hair net.

Says Rudolph, “Our cheese vat holds 75 to 78 gallons, which is pretty darn small in the world of cheese plants, but a good size for us because it’s the right size for our herd.”

That herd totals about 30 “milkers,” all of whom are milked by hand (that’s the “daily harvest” Angell speaks of). In fact, everything is done by hand around here, from pasteurization to adding bacterial cultures and rennet, which separates the curds from the whey.

“Most cheeses are similar up until that point,” Rudolph says. “If we want a moister, softer cheese, we will leave the curds larger and not get it quite as warm. For a harder, crumbly cheese, we’re going to cook the curds down to the size of a pea or even rice and try to get more moisture out.”

Next comes the salt bath and pressing. In the end, it takes two days of milking and one day of cheese-making to craft six wheels of the stuff. Aging can take anywhere from two to 24 months.

It’s hard work, but Rudolph gets his jollies when he’s nibbling on a chunk of “Rocky Mountain Butte,” a gouda-style goat cheese he named after a peak located midway between Cambria and San Simeon. It’s the same landmark his grandfather likely gazed at while tending to the avocado fields.

“The Libertine guys are our partners and they do things similarly; they have our cheese and we use their beer,” Rudolph says. “Our goats and pigs eat the leftover grain from their brewing process. They’ve made beer with our passion fruit and they’ll be making some with our oranges, out this summer.”

If you ask me, this cheese, in particular, represents more than funky flavor—it stands for what might be Stepladder’s defining value: collaboration. Good food—pork, cheese, produce—is nothing without context. The real spark happens when chefs, mixologists, brewers—real people—get ahold of it.

And, luckily for all of us, Stepladder is producing more than enough goodness to go around.

Hayley Thomas believes heaven is a place on earth. Send her guacamole recipes at hthomas@newtimesslo.com and follow her epicurean adventures on Instagram @flavorSLO.