As school walkouts last week spread throughout Americaâ€™s Chicano communities in response to a proposed federal bill to criminalize illegal immigration, districts in San Luis Obispo County hardly experienced an impact on par with those in other areas of California. 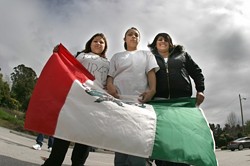 # For one thing, Latinos in general account for only 16.3 percent of the total population, barely half the state average. Even Cal Polyâ€”although still in the top 100 nationwide for degrees awarded to Hispanic studentsâ€”found itself desperately in search of more Latino enrollment after a recent report revealed the campus is quickly becoming whiter than a midwestern fish fry joint on polka night.

The CSUâ€™s chapter of the Movimiento Estudiantil Xicano de Aztlan (MEXA) proves relatively small by California university standards and, on the high school level, such groups remain virtually non-existent. As a result, organization of the local efforts sufferedâ€”certainly in comparison to urban communities where students used text messaging, Spanish-language radio and networking sites such as myspace.com to coordinate underground efforts like the southern spirituals of old.

However, despite the limitations, several local Chicano students stepped out the door to take their opinion on HR4437 to the street. In SLO, a few dozen left the high school Fridayâ€”joined by a handful from Morro Bayâ€”and brought protest downtown before returning to campus in the early afternoon. Administrators informed the students beforehand that they would have to serve weekend work-study for truancy if the walkout went forward. Principal Will Jones said the school plans to help organize a forum where Latinos can parlay their concerns to the rest of the student body.

â€œWeâ€™re here to protest because we know what theyâ€™re doing is not right,â€? said Maria Delgado, a junior at SLO High School. â€œWithout immigrants this country wouldnâ€™t be the same as it is now.â€?

That same day, small walkouts took place in Nipomo and Arroyo Grande. Yet, the largest demonstration, by no small margin, occurred earlier in the week in Paso Robles. Last Monday, on the stretch of Niblick Road running in front of the cityâ€™s only public high school, an estimated 300 students mounted a grueling daylong protest. The original group of 150 protesters left class just after 8 a.m., with others trickling out over the course the morning. According to PRHS faculty, general knowledge of the issue among those involved in the walkout varied greatly.

â€œItâ€™s great because thereâ€™s the stereotype that teenagers are apathetic, but these kids are out there prompting other students to ask questions,â€? student advisor Xelina Rojas said. â€œA walkout can be an effective tool if you know why youâ€™re doing it. Of course, thereâ€™s quite a follow-the-leader elementâ€”a lot of them donâ€™t have all the facts.â€?

The north county agricultural community, where Latinos compose 27.7 percent of the population, would scarcely seem an unlikely stage for the areaâ€™s largest school walkout. Even beyond sheer numbers, Paso Robles High School offers organizational advantages with its own chapter of MEXA located on campus, the only SLO County high school able to make that claim.

â€œThey are all college-bound and, as the premier Latino students, they tend to be socially active,â€? PRHS ethnic studies teacher Stan Cooper said of the group, which primarily serves as a conduit for higher education planning. â€œIn this case, the kids found something they could be passionate about. Many other students also see this as an attempt to aid the cause of criminalizing being Mexican, but not all of these kids can articulate that.â€?

Immediately following the walkout in Paso and a reportedly unrelated disturbance at nearby Flamson Middle School the following day, the school received numerous calls from parents asking about the walkout. PRHS principal Ed Railsback said most of the parents expressed curiosity, rather than direct objection, but those that did voice concern did so in regards to the disruption of classes. At the time of the walkout in SLO, a web poll posted by the Tribune indicated that a majority visitors to the site disagreed that the studentsâ€™ right to demonstrate trumped school interests.