On May 27, two days after George Floyd died in police custody in Minnesota, triggering weeks of nationwide protests, a black transgender man named Tony McDade died after being shot by police officers in Florida.

According to the Human Rights Campaign, McDade is just one of at least 16 transgender or gender nonconforming people who have been violentally killed so far this year. Many of these deaths are of black transgender women, the group states.

"Black people, LGBTQ people, and esepically all LGBTQ people of color are at greater risk for violence every day in this country," Tori Cooper, the campaign's director of community engagement for its Transgender Justice initivatie said in a statement about McDade's death. "This must end." 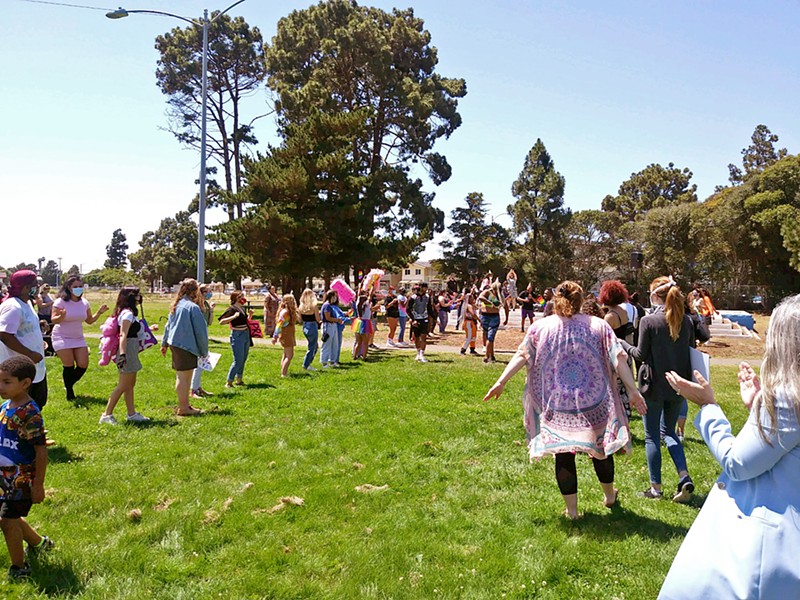 In recognition of these deaths, and in celebration of Pride Month, Building BLOCK (Black & Latinx Offering Community & Knowledge) held a rally in Lompoc at Ryon Park on June 27 where members of the LGBTQ-plus community spoke of their experiences.

Anthony Bryson told the crowd of about 100 people that it's hard to be black and gay in this country, but that the people gathered at the event can stand together and push for changes.

"We can come together, and we can redefine ourselves as a community and as a culture and as a people," Bryson said. "My life is a black, gay life, and my life matters like yours matters."

Other people spoke about the violence inflicted upon the LGBTQ-plus community, especially those who are transgender or gender nonconforming. Those personally affected include Lompoc Mayor Jenelle Osborne, who told the crowd about her family members who happen to be transgender.

"I have trans nieces," Osborne said. "They transitioned at a time when the bathroom bill was being argued in Texas and my 16-year-old niece appeared before the Legislature and said, 'You are creating a negative and destructive environment for me.' I've never been so proud of her."

In addition to these speeches, the group asked the crowd to recognize five minutes of silence to reflect upon the number of trans lives that have been lost to hatred and bigotry. But aside from these solemn moments, the afternoon was full of music, dancing, and celebration.

Building BLOCK has held multiple events since forming a few weeks after Floyd's death focused on speaking to the struggles and systemic racism the black community faces. Building BLOCK President Raelyn Person said the group held this Pride event to bring awareness to another community that has to deal with its own biases and other issues.

Along with these events, Building BLOCK's members have attended Lompoc City Council and other community meetings to push for changes in policing, education, and opportunities for the city's youth. Building BLOCK's Vice President Keith Joseph said he was born and raised in Lompoc, and not much has improved during that time.

The group intends to meet with and apply pressure to city leaders to push for changes, but change also needs to take place on an individual level, Joseph said.

"At the end of the day, it's about being a good person," Joseph said. "As far as skin color, preferences, it's just, if you have a good heart, we wouldn't have these types of issues." Δ