As we're ushering out our swing to the right with the departure of President Donald J. Trump and ushering in our swing to the left with President Joe Biden Jr., local tunesmith Ted Waterhouse (The Howlie Playboys, Catalina Eddy and the Blue Keys, The Hot & Cool Orchestra, The Tequila Mockingbirds, The Jump Jax) decided after the insurrectionist storming of the Capital that the time was right to revisit one of his earlier songs. 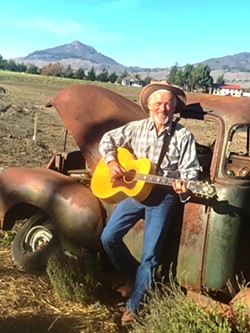 "I thought that in light of recent national events that need no further elaboration, this song might be timely. It's one that I wrote a few years back, in the days of George W., but it's sure been coming to mind during the last four years and especially in the last few weeks!" Waterhouse wrote in an email. "The lyric is from the point of view of the disembodied spirit of iconic musical hero Woody Guthrie and was borne out of the question, 'What would Woody think of all these shenanigans?'"

The Americana tune starts with a mini biography: "My name's Woodrow Wilson Guthrie, I come from Oklahoma sand/ And when the dust blew up and the banks shut down I followed that ragged band/ Out to sunny Californey where the money grows on the trees/ And I made a few songs along the way just for folks like you and me, though I never got the do-re-mi," Waterhouse sings, referencing Guthrie's subsistence existence as a busking folk singer.

Naturally, Waterhouse's song praises Guthrie's championing of the working man: "Now brother I've seen some hard travelin' I've seen folks slave 'til they died/ I've seen mothers lose their babies and you know I wondered why/ I've seen workin' men and farmers takin' it on the chin/ But I always sang for the union I always thought that we would win but now the roof is cavin' in."

Throughout the song, Waterhouse references a bunch of Guthrie classics, such as "This Land Is Your Land," "Do-Re-Mi," "Hard Travelin'," "Bound for Glory," "Pastures of Plenty," "The Ballad of Pretty Boy Floyd," "Roll on Columbia," and "So Long It's Been Good to Know Ya."

On the chorus, Waterhouse sings, "This land that's your land been handed to greedy fools/ Thought we learned our lesson but now they're burnin' down the school/ Folks better wake up while there's somethin' left to save/ Now excuse me while I roll over one more time in my grave."

Woody's Ghost preview
Ted Waterhouse
Find out more at tedwaterhouse.com.
Update Required To play the media you will need to either update your browser to a recent version or update your Flash plugin.

It's a lively track with some great players on it.

"The all-star recording features brilliant mandolin work by Kenny Blackwell (Little Black Train), bass by Fred Murray (Cafe Musique), and drums by Darrell Voss (of just about every great jazz outfit around the county!), as well as myself on acoustic and National resonator guitars and vocals," Waterhouse explained.

The song's timeliness really comes through in these later verses: "I thought this train was bound for glory though I never was much for church/ Though some called me irresponsible, said I left a couple wives in the lurch/ And some called me a communist 'cause I wouldn't bow to the business man/ But everywhere I rambled 'round I've always loved this great old land, always loved it the best I can/ But now there's half a million homeless sleepin' on the ground at night/ And there's still kids goin' hungry and that never will seem right/ And now they'll rob you with a fountain pen when they sell you their mortgage loan/ But even Pretty Boy Floyd the outlaw wouldn't take a family from their home, a family from their home."

I've been following Morro Bay native Amalia Fleming's career for years now. She was just 9 when she wrote her first song and sang it a cappella at the Live Oak Music Festival's kids talent show. She's written and performed original music ever since, and in 2018, at 16, she debuted her song "Renegades" at the 2018 Hardly Strictly Bluegrass Festival in San Francisco. The song appeared on the nationally released compilation protest album Raise Your Voice. Now 18 years old, she's moved to Nashville to attend Belmont University, and she's just released her first new song since heading to college.

"I have a new single out that I thought I would share with you," she emailed. "I just moved to Nashville to study music business and songwriting at Belmont University. I'm trying my best to promote and grow my audience as an independent artist. The single is called 'Art,' and I fully produced and mixed it myself with another musician."

The production is fantastic! It opens with a swooning wall of layered voice before Fleming's gentle guitar enters, setting up the first verse: "You're my light in the dark. I keep on coming back to you. I want you to want me like the others do, and I just want to fall in love with you. But I can't and I won't 'cause it will all just end one day. Put my heart on the line and you'll hurt me just the same."

Like young Taylor Swift's penchant for writing about failed romance, the teenage Fleming is caught up in matters of the heart, and like Swift, she's also got a real ear for some amazing lines!

"This is a feeling I can't explain, like I'm driving all night going the wrong way" is such a great metaphor, and the song's title comes from this skewering: "It's okay if you break my heart. I'll just turn you into art."

Art preview
Amalia Fleming
Find out more at amaliafleming.com.
Update Required To play the media you will need to either update your browser to a recent version or update your Flash plugin.

Fleming's voice sounds simply beautiful, and the song demonstrates her continuing evolution as an artist. Check out this and her other songs at her link tree: linktr.ee/Amalia.songwriter. Δ