I think we're all ready to put 2020 in our rearview mirror, but we're not there yet. If you find yourself looking for some way to inject a little cheer into what promises to be a dreary holiday, check out these albums—some classics and some newer—that are guaranteed to help you make the most out of what will no doubt be an isolated yuletide. Here are six of my favs in no particular order. 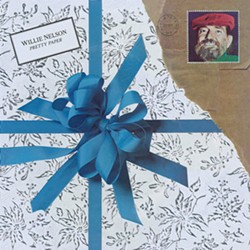 This Willie Nelson album found the singer reunited with producer/arranger Booker T. Jones, who the previous year had collaborated on Stardust, arguably Nelson's greatest album of classic cover songs. It opens with the title track "Pretty Paper," which Nelson wrote in 1963 when he was just getting started and which was a big hit for Roy Orbison. The rest of the songs—save for the closing instrumental, "Christmas Blues," on which Nelson shares songwriting credit with Jones—are well known. Hear everything from Irving Berlin's "White Christmas" to Gene Autry and Oakley Halderman's "Here Comes Santa Claus." Every song is a gem! 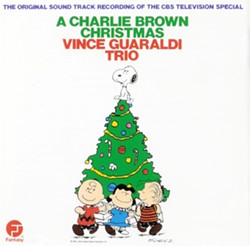 I grew up watching The Peanuts animated Christmas special and even today can't bring myself to change the channel if I come across it. It's sweet right from the opening when Charlie confides to Linus that despite the holiday season, he feels depressed. I credit the special for my first introduction to jazz, and when I listen to the album, I'm reminded of the wonderful moments in the show, like Linus reciting the annunciation to the shepherds: "And, lo, the angel of the Lord came upon them, and the glory of the Lord shone round about them: and they were sore afraid"; or Charlie's rejection of the Christmas commercialism by bringing home his sad little tree, decorating it and thinking he killed it, and Linus wrapping its base with his blanket while even Lucy agrees Charlie's choice embodied the season's spirit. 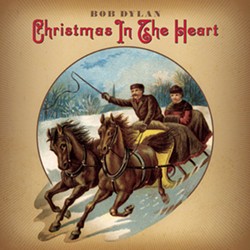 For many, Dylan's voice is a love-it-or-hate-it kind of thing. It's certainly not the kind of voice you associate with Christmas music, but I think its iconoclastic vibe helps the album because he's earnestly singing this mix of hymns, carols, and Christmas classics. There's not a hint of irony in his delivery, and I think that's surprising and deeply charming. When asked about his delivery of the material, he said, "There wasn't any other way to play it. These songs are part of my life, just like folk songs. You have to play them straight too." Dylan was born Jewish but converted to Christianity in the '70s, and he grew up in Minnesota singing these songs like every other kid. You can feel they're a part of his life. 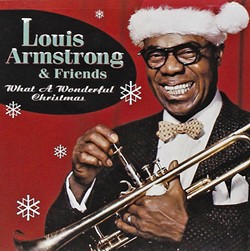 Louis Armstrong, What a Wonderful Christmas (1997)

This compilation of Christmas classics was put together and released long after Armstrong's death in 1971 and is the only Christmas collection to contain all six Christmas sides he recorded for Decca, as well as a number of other Christmas classics by other jazz artists—14 songs in all. His expressive gravel voice and energetic delivery never flag, and on tracks like "'Zat You, Santa Claus?" the irrepressible showman really shines through. Other artists and songs include Eartha Kitt's "Santa Baby" and Mel Tormé's "The Christmas Song." It's an amazing Christmas jazz record. 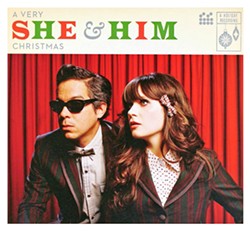 Zooey Deschanel and M. Ward make a wonderful combination—he's laid-back cool and she's a wide-eyed pixie dust machine. Ward lived in SLO Town for a while but has gone on to have a remarkable career. His sparkling guitar work and rustic voice have made him a hipster favorite. Deschanel made her big screen debut in Mumford (1999) and has gone on to star in a number of films as well as the popular TV series New Girl, and she was in Elf opposite Will Ferrell, really upping her Christmas street cred. Sparsely arranged and charmingly delivered, the songs on this collection feel timeless, even a track like The Beach Boys' "Christmas Day," which makes great use of Deschanel's bell-clear voice. 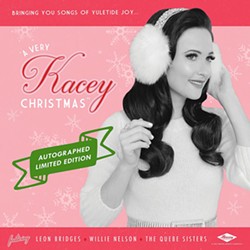 I never listened to any of this country queen's music until I ran across this Christmas album a few years ago. I can see why she's so popular, and this album is filled with gems. Four of the album's dozen tracks are originals, including a duet with Willie Nelson called "A Willie Nice Christmas" that's a hoot. She also sings a duet with Leon Bridges on a track they co-wrote called "Present Without a Bow." It's a real earworm. Her "Christmas Makes Me Cry" is tender as heck, and her "Ribbons and Bows" will have you bopping. Add in tracks like John Rox's novelty song "I Want a Hippopotamus for Christmas" Robert Alexander Anderson's Hawaiian romp "Mele Kalikimaka" (featuring The Quebe Sisters), and I can listen to this one over and over. Δ