Tony Balbinot is a rail-thin specter, and when he picks up one of his guitars, he turns into the hardest workin’ man in show business. Endorsed by Gretsch Guitars, Tony’s also got a warm spot for vintage equipment, which fits in just fine with his retro sound, everything from roots rock to rockabilly, surf rock, swamp boogie, and more.

Tony’s gone through a lot of personnel over the years and not because he’s hard to work with. It’s just that most people can’t keep up with his constant touring and recording schedule. I’ve lost count of how many CDs he’s released, but it’s got to be about 15 or so, and he’s constantly on the road, playing all over the country and beyond, like his recent gig at Holland’s Moulin Blues Festival, during which he rocked 6,000 fans.

He’s also a philanthropist who’s raising money for the Children’s School on the Hopi Indian Reservation through the sale of his album Haunt This Guitar. “All of the production costs for the album were donated, and 100% of the proceeds will go directly to the kids,” said Tony. “Twelve bucks to you and me might mean dinner for two at a burger joint, but that same twelve dollars sure can go a long way on the reservation.” His CDs are available at crackedpistonrecordings.com.

Check out the Cadillac Angels this Thursday, Dec. 31, at the Otter Rock Café starting at around 8:30 p.m.

Electro rockers Tropo will headline the “Electric Ball” New Year’s Eve at the Clubhouse this Thursday, Dec. 31 ($10 cover). The event includes five other acts, including DJ Shaggy, KauzaFex, Chonie Vargas, and Ted Waterhouse, on two live stages. The music starts at 6 p.m., and there’s a free shuttle available in SLO (call in advance: 548-8500.)

Dr. Danger Band plays a no-cover show at SLO Down Pub this Thursday, Dec. 31, so boogie down and fill up on prime rib and other delights from Ellie’s Café.

“We are not a blur of noise,” wrote Wild Anderson’s Greg Moore on his MySpace page. “We choose to chase areas of space with some convincing spank. Our original music is not rated nor does it have a targeted age group as we have found fans from 2 to 92. If people and animals are moving to the beat, have a smile on their face, well ... mission accomplished!” Wild Anderson play’s Morro Bay’s Fuel Dock on Thursday, Dec. 31, from 9 p.m. to 1 a.m. 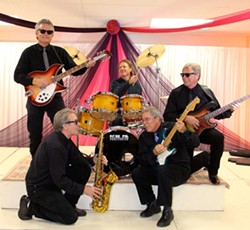 If you haven’t already bought tickets ($75! Yikes!), you may be too late, but call 929-5211 to see if there are any left to see oldies act Unfinished Business in Arroyo Grande’s South County Regional Center on Thursday, Dec. 31. The band was just featured on the cover of Journal Plus, so they wrote a song about it sung to the tune of the 1972 hit “The Cover Of The Rolling Stone” (written by Shel Silverstein and originally recorded by Dr. Hook and The Medicine Show): “Well we’re old rock singers, with arthritis in our fingers/ No one knows us anywhere we go/ We sing a lot of rock and we sing some soul/ A thousand dollars a show (give or take)/ We don’t take pills, but we still get thrills/ And a thrill that just happened to us/ It’s the thrill that’ll getcha when you get your picture/ On the cover of Journal Plus.” A prime rib and chicken marsala buffet dinner is included with admission. A no host bar and $10 corkage fee will benefit the Arroyo Grande Knights of Columbus.

De La Bahia, featuring legendary conguero Max Garduno, will be performing on Thursday, Dec. 31 at the Inn at Morro Bay. Music and salsa dancing will take place in the banquet room (on a wood dance floor, woo hoo!) from 9 p.m. to 12:15 a.m. Celebrate the New Year salsa style! The cover’s $10.

If you’re up in Cambria on Thursday, Dec. 31, check out Rough House at Mozzi’s, the 100-plus-year-old watering hole. “One hundred? That’s almost as long as the Rough House band members have been collectively playing music!” said the band. “The place is really friendly, has a great dance floor, excellent bar, terrific service, and at least four of our four band members have passed out there in past years.”

The Pewter Plough Playhouse has a spectacular New Year’s Eve planned, beginning with a performance of The Mousetrap followed by live cabaret music and a generously served champagne buffet in the café. Agatha Christie’s whodunit starts at 7:30 p.m., followed by L.A.’s singing sensation Yoly Tolentino, accompanied by piano man David Manion, delivering great Broadway, pop, jazz, and songbook favorites. Tickets are $125 each and may be sold out by now, but call 927-3877 to find out.

Call 239-1730 to see if there are tickets left for Cass Winery’s New Year’s Eve celebration this Thursday, Dec. 31. Tickets are pricy at  $100 for adults and $25 for children, but money raised will go toward the purchase of prescription drugs and medical supplies for a team of medical doctors, nurses, pharmacists, and others who will be traveling in 2010 to very poor regions of Kenya and Uganda to provide medical clinics for more than 3,000 people. The evening includes performances by world-renowned composer and pianist Marek Zebrowski and dancing to the Mighty Croon Dogs, plus a dinner of exotic East African cuisine.

Punk act Street Dogs hit Downtown Brew this Saturday, Jan. 2 (7:30 p.m.; all ages; $12). The inveterate act known for their fist-pumping anthems has four albums out, most recently State of Grace on Hellcat Records. According to the band, the new album “speaks from and to the working class with poetic heartfelt tales of family, hardships, and cries for unity.”

Stevie Starlight plays the Frog and Peach this Saturday, Jan. 2 at 10 p.m. “Our style is ‘70s rock’n’roll,” said band member Ian Stone. “It sounds like a mixture of Bowie meets Hendrix. We perform about three hours of original music with some covers for you to amaze over.”

This Sunday, Jan. 3, international saxophone/vocalist star Red Holloway begins the 19th season of the Famous Jazz Artist Series at the Hamlet in Cambria. Holloway, who when he’s not on the road lives in Cambria, has been the series’ season opener for each of its existing 19 years. Art Hillary (piano), Luther Hughes (bass), and Garrick King (drums) will join in, as will concert series co-producers Charlie and Sandi Shoemake (vibraphone and vocals). There’s a 4 p.m. show for $15, a 7:15 for $12, or pay $20 and stay for both. Call 927-0567.

Check out the gritty, acoustic soul of Sedona-based duo Decker at Linnaea’s Café this Wednesday, Jan. 6 at 8 p.m. The melancholy duo of Brandon Decker and Nanci McDonald are touring in support of their first release, Long Days, “a musical narrative of redemption structured around an autobiographical framework rife with poignant lyrics and rich musical layers,” said Decker.

Glen Starkey makes neither promise nor New Year’s resolutions. Get no commitments at gstarkey@newtimessllo.com.

Cobbling together a variety of ethnomusicology sounds, Los Angeles’ Fool’s Gold sounds uniquely un-American. Not that current bands aren’t investigating international sounds: Vampire Weekend kidnapped Afro-pop for its debut and numerous bands from Animal Collective and Extra Golden are adding a cacophony of percussion rattle, shakes, and bangs to zest up their indie rock sound with worldly rhythms. But Fool’s Gold’s self-titled debut sounds distinctly foreign, as if airlifted from Africa and inspired by the Congolese “sambas,” Sahara desert “blues,” and trance-inducing Afrobeat. Featuring members of L.A. rock outfit Foreign Born (as well as gaining assistance from the Fall and We Are Scientist), the album sounds surprising authentic. In fact, you’d be tough to pick “Ha Dvash” out from shell game with Tinariwen and Ali Farka Touré. With lead vocalist Luke Top singing everything in Hebrew, you may not understand the lyrics, but you’ll definitely find the groove.

As a celebrated rocker, Tom Petty may not garner the same column inches Dylan and Springsteen do, but trace a finger across a list of his four-decade discography, and out pops a lifetime of hits. With the Heartbreakers, Petty tackled everything from defiant Southern rock (“Even The Losers”) to bombastic garage rock (“American Girl”). Even on solo albums like Full Moon Fever and Wildflower there were members of the Heartbreakers behind the scenes adding their muscular influence. As a band, maybe only Los Lobos or Springsteen’s E Street Band could challenge Petty’s Heartbreakers as the great American band. But don’t make your decision until you hear the four-discs of the recently released Live Anthology. If you shied away from live albums previously, don’t hesitate here. Whether they’re smoking through a cover of Bo Diddley’s “I’m A Man” or lowering the lights to jam away to “It’s Good To Be King,” they attack everything with precision and sound flawless. A perfect acknowledgement to one of rock’n’roll’s finest.