Paso Robles and the state of California are in the final stages of negotiations on a sale of the Estrella Juvenile Correctional Facility, the shuttered state prison on 137 acres that the city hopes to acquire and repurpose for community uses. 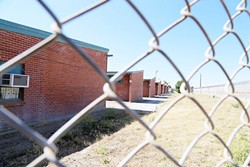 But the change of hands won't come cheap for Paso. The state is asking for fair market value of the land on Airport Boulevard—appraised at $4.8 million—according to City Manager Tom Frutchey.

Included in a sale would be the roughly 60 existing buildings and dormitories on site, which the city envisions reusing for a future homeless services center, farmworker lodging, and other endeavors. The prison, which closed in 2008, is currently listed as surplus property by the state Department of General Services (DGS).

"So far the state has been unwilling to negotiate price. It is based on their appraised value," Frutchey told New Times via email. "[That's] in part because they look just at land. They are not willing to consider the costs of cleaning up the site, etc."

Now city leaders have to decide whether to pull the trigger on the acquisition. The City Council will meet to discuss the potential sale on Nov. 20, after city staff traveled to Sacramento on Nov. 8 to meet with state officials. Frutchey called the meeting in Sacramento "very productive" but said DGS isn't likely to issue a purchase and sale agreement until 2019.

"The additional time will help us complete our due diligence and consider how best to proceed," he said.

Once a purchase and sale agreement is issued, the City Council would have 60 days to approve or reject the offer. If the sale falls through, the state would likely move on to court private developers for the land.

In response to questions from New Times about whether DGS would consider a lower price on the property given the public benefits that could come from city ownership, DGS officials sent a web link to state government code on the matter.

"The DGS shall sell the land ... upon any terms and conditions ... as the DGS may deem to be for the best interests of the state," code section 11011 reads. Δ