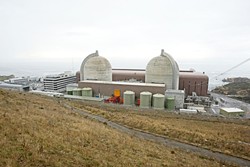 The state water board released a draft policy last month that would effectively eliminate the cooling system (once-through cooling-water intake) used by 19 power plants throughout the state. Once-through cooling systems draw large amounts of ocean water to cool turbines and then return the hot water to the ocean. Such systems have two main environmental impacts: sucking in and killing sea life and heating water temperatures near the plants, according to the water board.

To reduce the environmental impacts, the state is requiring plants to reduce water intake rates by 93 percent. The intention is to reduce the intake to mirror closed-cycle systems. It’s hard to predict how the recent decision ultimately would affect the two local generating stations because no one is willing to speculate and the policy may undergo significant changes by the time it is finalized, probably by the end of the year.

The policy has been considered potentially fatal to Morro Bay’s now-dormant natural gas plant. As for Diablo Canyon, which is operated by PG&E, the potential impacts are unknown.

“We look forward to continuing to work with the board and the other energy agencies to develop a policy that helps the board meet its water quality goals while meeting the state’s energy needs,” PG&E spokeswoman Emily Christensen said in a written response. PG&E has until the end of 2021 to make the necessary changes.

Even under the draft requirements, there will be some wiggle room for energy companies to keep electricity flowing in California, provided the intention of environmental protection is satisfied.