State mandate makes it easier to build more charging stations for electric cars, but in AG, some worry about overreach

Electric car owners looking to charge up their vehicles in the city of Arroyo Grande don't have that many options.

Currently there are only two locations in the city with public access to electric vehicle charging stations. One is the parking lot of Arroyo Grande Community Hospital on Halcyon Road, which has two stations near its front entrance. The second is a municipal parking lot on Le Point Street, located just behind City Hall. 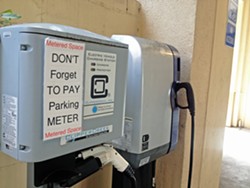 But residents may see more charging stations popping up after a majority of the City Council voted on March 13 to move forward with a proposed ordinance that will make it easier to get city permits to build them on both residential and commercial property.

"I think it's a good thing that we are doing to allow people to plug in and charge their electric vehicles, because it's better for the environment," said Councilmember Kristen Barneich.

This city has little choice when it comes to passing the ordinance. It's necessary for the city to come into compliance with recently enacted state law. That law is part of an ambitious plan by Governor Jerry Brown to cut greenhouse gas emissions to 40 percent below 1990 levels over the next 12 years.

The Arroyo Grande City Council approved the first reading of the proposed ordinance in a 3-2 vote at its March 13 meeting. Once passed, it will bring the city into compliance with Assembly Bill 1236. Passed by the state Legislature and signed into law in 2015, AB 1236 requires local municipalities with a population of less than 200,000 to adopt an ordinance that creates an expedited permitting process for electric vehicle charging stations.

Under Arroyo Grande's proposed ordinance, permitting for charging stations would become streamlined in an over-the-counter administrative process. If an applicant submits the proper paperwork and the project meets all the necessary requirements, the permit processing time could take just 24 hours, according to Associate City Planner Kelly Heffernon.

"The process is very similar to the city's existing permitting process," she told the council.

Heffernon said it costs about $170 for a permit to install a charging station at a private residence, and $350 for a permit on a commercial property.

The state's mandate on charging stations is expected to help push California toward its goal of putting more electric vehicles on the road and reducing vehicle emissions. However, in Arroyo Grande, some officials balked at being required to pass policy that was forced upon the city with virtually no local input.

"It doesn't ease any of my frustration that this is yet one more thing that the state is requiring without hearing our voice, and whether or not this is even an issue for us," said Councilwoman Barbara Harmon, who voted along with Councilmember Tim Brown against approving a first reading of the ordinance.

Harmon and Mayor Jim Hill both noted that the requirement was one of multiple unfunded mandates from the state. Those include another law that took effect last year requiring the city to expedite and streamline the permitting process for accessory dwelling units, also known as granny units.

"There's varying layers of these state mandates that, by law, need to be expedited," Harmon said. "I do have a problem with the piling on of these things."

"It isn't expected to create any significant impacts on staff due to the low volume of [charging stations] we've been processing to date," she said.

"Even if California's sales growth were to slow by 5 percent, we project the state will easily meet its 1.5 million [zero emission vehicle] goal by 2025, if not before," the report stated.

More cars on the road could mean more stations, which could result in more applications filed in small cities like Arroyo Grande.

"I think we are going to see a lot more of these in the future," Hill said. "A lot more applications. I share Councilmember Harmon's concerns about competing priorities."

Still, Hill acknowledged that passing the ordinance was a requirement from the state and voted a "reluctant" yes on its first reading. The ordinance will come back before the council for final approval at a future meeting. Δ