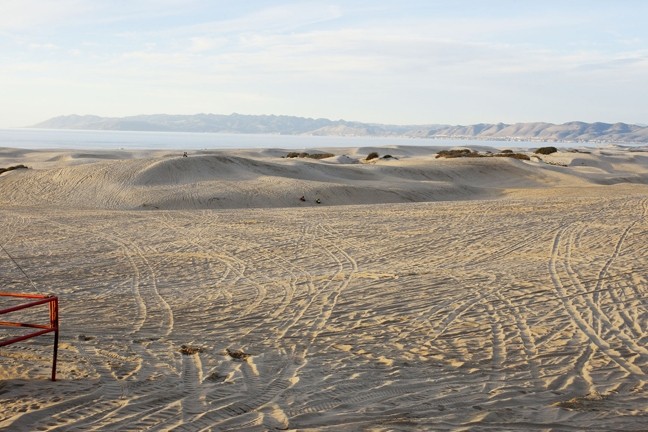 After years of wrangling in courtrooms and boardrooms, two major players in the ongoing Oceano Dunes air quality debate have taken a step toward a long-awaited resolution.

On March 26, the San Luis Obispo County Air Pollution Control District (APCD) and California State Parks jointly signed a “consent decree” agreement and petitioned the state Court of Appeal to dismiss the two dune-related appeals currently pending in the court. The APCD board voted unanimously to accept the agreement.

“This is all for the sake of air quality, and we want our ‘dust rule’ to be enforced,” APCD Executive Director Larry Allen told New Times. “Hopefully, the court will see this agreement as a good resolution.”

As written, the consent decree would almost entirely preserve the dust rule—a controversial policy approved in November 2011 that gives the APCD the ability to penalize State Parks when and if dust levels on the Nipomo Mesa exceed state standards after May 31, 2015.

The major compromise in the agreement, however, is the replacement of a controversial permitting requirement for State Parks with a more structured, cooperative mediation process for potential future dust rule implementation disputes.

Should an intractable disagreement between State Parks and the APCD arise, a jointly selected subject expert called a special master would mediate that dispute to the best of his or her ability. If the dispute persists, the consent decree establishes an expedited mechanism that would send the issue directly to a Superior Court judge.

APCD attorney Ray Biering said the consent decree was officially filed with the Second District Court of Appeal on April 1, and that the agreement remains tentative until it’s officially approved or denied by the court.

Though State Parks has now voluntarily agreed to withdraw its dust rule lawsuit, Biering said the other pending suit—filed by off-highway vehicle (OHV) advocacy group Friends of Oceano Dunes—must be either withdrawn or dismissed by the court in order for the consent decree to be approved.

“Early indications are that the Friends won’t agree to dismiss their suit,” Biering told New Times. “If that remains the case, we will be asking the court to dismiss it.”

Friends President Jim Suty told New Times that the group opposes the agreement and will not be withdrawing its suit.

On a local level, OHV advocate Kevin P. Rice said he was pleased to see the demise of the permitting requirement, but that much was left unresolved by the agreement.

“If the consent decree is approved, that means all the controversial dust mitigation discussions are going to take place behind closed doors,” Rice said. “We won’t know what’s happening until they announce it.”

An APCD study, which some locals have argued is flawed, previously concluded that OHV riding at the Oceano Dunes State Vehicular Recreation Area (which has sections owned by both State Parks and the county) significantly contributes to the dust pollution issue on the Nipomo Mesa.

Click here for a PDF of the full text of the consent decree agreement.