The San Luis Obispo County Air Pollution Control District is cracking down on California State Parks, and about 48 acres of the Oceano Dunes State Vehicular Recreation Area are expected to be closed to vehicles by 2020. 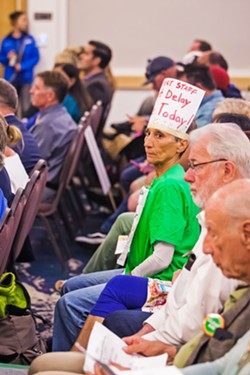 At a lengthy hearing on Nov. 18, the Air Pollution Control District (APCD) hearing board voted 4-1 to approve more stringent changes to a stipulated abatement order under which the park's dust mitigation process is currently operating.

The newly approved, modified order includes more specific projects State Parks will have to take on within the coming year to reduce potentially harmful dust emissions in the Oceano Dunes, according to Karl Tupper, an air quality monitoring specialist who spoke at the meeting. It also includes set deadlines and strategies for moving forward if those target dates aren't met.

"It's designed to hardwire the mitigations for this next year," Tupper said at the meeting, "and also to shore up and fix the process that broke down this last time."

The APCD board was called to convene after a canceled October workshop due to State Parks' failure to complete a work plan for dust mitigation that the APCD and its scientific advisory group would approve. While State Parks did submit two drafts of an annual work plan for 2019—the first on the Aug. 1 deadline—both were rejected by the APCD, and at the hearing on Nov. 18, APCD Officer Gary Willey called the plans "grossly inadequate."

Under the modified order, State Parks will be required to close vehicle riding in a 48-acre swath of land near the shoreline by Jan. 1, 2020. The space is currently used for camping and riding, but it will soon be home to a restored, vegetated foredune that scientists say will help prevent the spread of dust in the park and neighboring communities.

At the Nov. 18 meeting, several community members who live in Oceano and on the Nipomo Mesa called for more intense action to reduce dust emissions.

Mesa resident Laurance Shinderman asked the hearing board to approve the proposed modifications but to consider coming down harder on State Parks.

"So here we are again," Shinderman said during public comment, holding a tin can high above his head. "Will we continue to kick the can down the road or take meaningful and corrective action?"

Shinderman dropped the can on the ground, where he left it after wrapping up his comments, causing those in favor of keeping the dunes largely open to vehicles to repeatedly shout, "Pick up your trash!" Shinderman shouted back that he'd pick up his litter after they clean up theirs from the dunes.

Next, Nipomo resident Carla Haynie faced the hearing board members, who she said "apparently have no backbone."

"You are just like boiled noodles," Haynie said. "You hold all the cards. You can actually close the gate and tell them these are the lists of things to accomplish, and until they're accomplished, you don't get to go back out on the park."

But when board member Robert Carr moved to scrap the proposed modifications and declare the Oceano Dunes a public nuisance, which would give the APCD more regulatory power over the dust mitigation process, it wasn't seconded.

"For me personally, I think that this stipulated process is working quite well," Nelson said. "We hit a hiccup here in the fall when the work plans were not up to the requirements of the scientific advisory group, but I think in general the stipulated order process is working pretty well and, with the modifications made here, I think we're making good progress." Δ