California State Parks says that it has stopped discouraging snowy plovers from nesting in open vehicle riding areas of the Oceano Dunes, a decision that came after local conservationists raised concerns about the issue with the California Coastal Commission in early June. 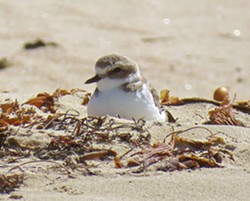 During virtual Coastal Commission meetings on June 10, 11, and 12, Executive Director John Ainsworth said the commission is investigating recent complaints regarding State Parks and its attempts to keep snowy plovers out of open riding areas in the Oceano Dunes while the park is closed to vehicles. Some commissioners believe the process—which State Parks confirmed includes scuffing out early signs of plover nests and putting up streamers to scare the birds off—violates the Coastal Commission Act and the state and federal endangered species acts.

"Let me just be clear right up front that we did ask State Parks to cease those activities verbally," Ainsworth said at a Coastal Commission meeting on June 11. "I consider this to be a really serious situation and violation, and I assure you we're going to continue to pursue this expeditiously."

The Oceano Dunes State Vehicular Recreation Area (SVRA) has been closed to vehicles since March 26, as an effort to reduce crowds at the park and travel into the area amid the coronavirus pandemic. Without vehicles in the area, plovers have been building nests outside their "seasonal exclosures"—designated breeding areas that are off limits to vehicles and visitors.

Although it's still unclear when State Parks plans to reopen the Oceano Dunes to vehicles, Jeff Miller, a Los Osos resident and senior conservation advocate at the Center for Biological Diversity, said the reintroduction of vehicles could put nesting plovers at risk.

Although State Parks said it can't keep vehicles out of the Oceano Dunes and fulfill its obligation to provide the public with "appropriate public access," Miller and other local conservationists hope the park will remain closed to vehicles for at least the remainder of this plover breeding season, which goes through September.

"State Parks is acting as if dune buggies are the endangered species," Miller said.

"In order to coordinate our efforts to jointly protect plovers and terns during the nesting and foraging season, prior to reopening the park for [vehicle] and camping use," Haage wrote, "we agreed that our biologists and staff would meet to discuss outstanding issues and questions." Δ