State Sen. Hannah-Beth Jackson reflects on years of advocating for domestic violence survivors as she nears the end of her political career 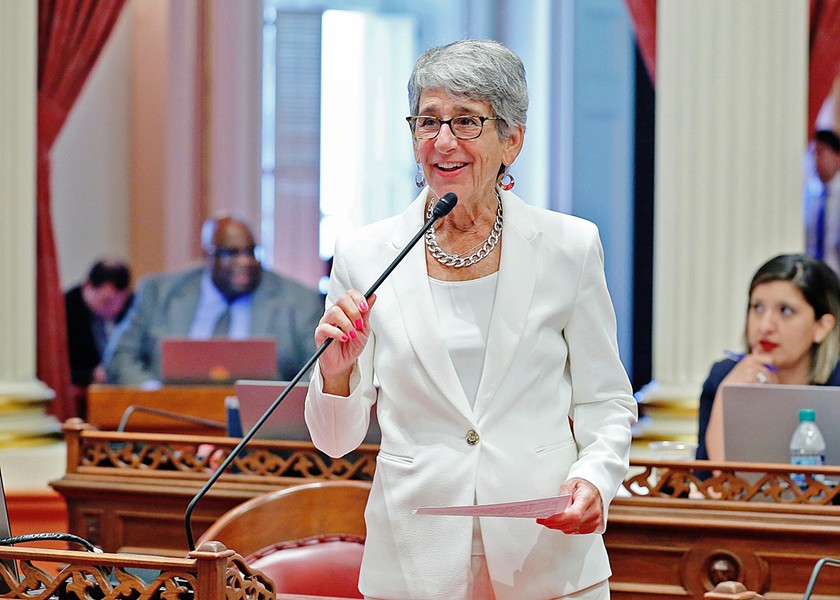 Photo Courtesy Of Facebook THE GOOD FIGHT During the past two decades, Hannah-Beth Jackson has served Santa Barbara County as both a state Assembly member and senator. Over the years, she's been a fierce advocate for domestic violence prevention and survivors through her legislation.

Looking back at State Sen. Hannah-Beth Jackson's legislative track record, her commitment to preventing domestic violence is indisputable. Jackson has authored or co-authored at least eight different bills over the years specifically pertaining to domestic violence, plus countless more that address related issues like sexual assault, stalking, and workplace rights.

But Jackson's impact on domestic violence prevention started long before she held elected office: Domestic violence issues first landed on Jackson's radar in the late 1970s when she was fresh out of law school and working in the Santa Barbara County District Attorney's Office.

"I saw a shocking number of cases coming in," she said. "The more I dug into it, the more I realized that this actually was not so unusual, and in fact, it actually has had epidemic proportions to it."

"The basic culture was that the man's home is his castle, and what goes on behind closed doors is really not the business of law enforcement," she said. "I thought that was absolutely ridiculous. ... I remember being very insistent that, when we had a case of domestic violence, the case be prosecuted and that the perpetrator have to suffer some consequences."

Jan Campbell, executive director of Domestic Violence Solutions in Santa Barbara County, recalls that Jackson was involved with the organization's early founding, when it was called Shelter Services for Women, and the senator continued to be supportive over the years.

"She's just been a tireless advocate in not only her role as an attorney but also in her role in state government," Campbell said.

Before Jackson's current position as state senator, which she's held since 2013, Jackson was an Assembly member from 1999 to 2004.

"When I got to the Legislature, I immediately started investigating what we could do to create both better awareness and better outcomes for the victims," Jackson said.

She worked to address how dangerous domestic violence is, as it all too often escalates into more serious crimes like homicide.

"I wrote legislation that requires that if somebody is accused of domestic violence and a restraining order is issued, and they violate that restraining order, the prosecutor is required to notify the victim when a bail hearing for that alleged perpetrator is going to occur," Jackson said.

This allows the victim to testify so that the court can make an informed determination about whether the perpetrator is at risk of reoffending, Jackson said.

"This bill arose out of a case in Ventura involving a woman," Jackson said. "[Her] ex-husband had violated restraining orders something like 20 or 30 times. They let him out on his own recognizance. ... He broke into her home at 6 in the morning and, in front of their three children, stabbed her to death."

In response to the tragedy, Jackson's bill established what she calls a "cooling off period," so that perpetrators are held without bail until the case is resolved.

Jackson is also proud of a bill that prohibits employers from discriminating or retaliating against employees who suffered domestic violence, sexual assault, or stalking.

"It allows the employee to request reasonable accommodations to ensure their safety in the workplace," Jackson said. "It also calls for implementing a workplace safety plan in response to the potential for a domestic violence incident."

Campbell from Domestic Violence Solutions said that Jackson's legislation and support over the years has helped her organization immensely.

"She looks at things holistically," Campbell said. "She's done so many things to strengthen families and particularly the role of women."

"The more stable people are, the less trauma they have to deal with," and the less domestic violence occurs, Campbell added.

There's no question that the pandemic has increased stress for many people, and Campbell said there's been a corresponding uptick in domestic violence calls.

"We had so many more calls in the north part of the county, because coronavirus was hitting Santa Maria, Guadalupe, Lompoc much harder with COVID," Campbell said. "Domestic violence doesn't really discriminate based on race or gender or economic stability, but different things create spikes."

Though 2020 will be Jackson's last year in office—she's retiring from politics this year—Campbell is hopeful that local political advocacy for domestic violence issues will continue. She expects that Monique Limón, a state Assembly member running for Jackson's seat, will continue Jackson's legacy if elected.

Campbell also commended recent efforts from Gov. Gavin Newsom, who on Sept. 29 announced that he had signed five bills into law that support survivors of sexual assault, domestic violence, and other abuse crimes.

"The legislation that he signed, primarily around funding and some housing issues, is all very helpful," Campbell said. "He understands that, when you're dealing with domestic violence, you're not just dealing with an isolated group of people. This affects the entire community."

And though this will be Jackson's last term, she said it won't be the last the community sees of her.

"I'm sure there's still mischief to be made," Jackson said with a laugh. Δ